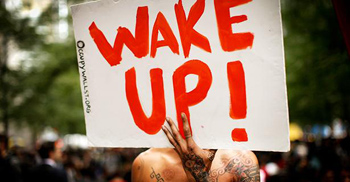 Editor’s note: This story was filed prior to the police raid and eviction of the Occupy Wall Street camp in Zuccotti Park that took place in the early hours of November 15.

Occupy Wall Street stumped the media from the beginning. Here was a movement that didn’t support either political party. Unlike the Tea Party, it was not backed by a giant corporate overlord. It did not have traditional leadership.

From its inception, OWS has existed outside traditional beltway games, and so the establishment media, which is generally only comfortable covering a story in “horse-race” terms, didn’t understand it. Are the protesters supporting Obama? No. Who is the leader? We have no leader.

The New York Times has rightfully become the archetype for how not to cover a social upheaval of this magnitude. From Ginia Bellafante’s opening salvo when she called the craziest woman she could find at OWS a “default ambassador” of the movement to Andrew Ross Sorkin’s confession that he only visited the protest at the behest of a “major bank” CEO, the Times repeatedly revealed itself to be irrelevant, out-of-touch and all-too-cozy in its role as sycophant to the rich and powerful.

In an October 14 article, “In Private, Wall St. Bankers Dismiss Protesters as Unsophisticated,” written by Nelson Schwartz and Eric Dash, the Times permits Wall Street to disseminate propaganda and smears against the protesters—anonymously, of course. One “top hedge fund manager” scoffs that “most people view [OWS] as a ragtag group looking for sex, drugs and rock ‘n’ roll.”

I’m still waiting for the protesters to be afforded the same luxury to tee off on bankers without having to publicly state their names or be held accountable in any kind of way.

One could practically see the vein on CNN anchor Erin Burnett’s head pulsate as she fought to understand why normal citizens would gather to protest against her beloved Wall Street. She crafted a segment called “Seriously?!” in which she made the absurd claim that because protesters purchase products, they can’t possibly simultaneously protest the unethical behavior of Wall Street.

In short, unless protesters live in caves and craft tools out of rocks and mud, they’re not permitted to protest the gross wealth divide in the United States.

Burnett commented that she “saw dancing, bongo drums, even a clown” at the protest, but its participants “did not know what they want,” except that “it seems like people want a messiah leader, just like they did when they anointed Barack Obama,” which is such an abysmal misreading of OWS that it’s difficult to know where to begin.

OWS is a leaderless movement precisely because it does not want a “messiah leader.” The group is a pure democratic force that literally votes on every decision—and I do need to emphasize every decision. The General Assemblies are a remarkable thing to behold—a time when every single future action of OWS is voted on democratically by the assembled body.

Second, “they” did not “anoint” President Obama. While OWS leans to the liberal end of the spectrum, it is also comprised of a large number of independents and even some Ron Paul supporters. Furthermore, many activists who did vote for Obama in the past told me they did not plan to do so in the future, and even the ones who did say they would support the president come election time added they felt profoundly disappointed in both Obama and the Democrats in Congress. That’s hardly stirring praise for a messiah.

Finally, if the media doesn’t understand by now what OWS wants, it simply hasn’t been paying attention. Quite simply, OWS wants accountability and a one-tier justice system that holds corrupt bankers, Wall Street speculators and hedge fund managers responsible when they wreck the world’s economies. OWS wants to live in a society that properly funds schools, and doesn’t offer tax breaks to massive corporations and pump endless money into two failed wars. OWS wants every person, regardless of income, to have a chance to live a dignified life, complete with a home, healthcare and steady employment. OWS believes in the right to unionize in order to fight for this dignity, and also that those Americans who earn more than $1 million a year should, yes, probably pay a larger percentage of their earnings in taxes than their maids.

The motives are hard to miss, but of course, documenting them entails showing up to the Occupy movements and talking to more than one person.

Here, the failure is not the Times’ and CNN’s alone. In numerous outlets and publications, I see the accusation of “scattered ideologies” as if a movement that claims to represent 99% of the population can come up with a fixed, 10-point agenda overnight. Of course the complaints are numerous. There’s a lot wrong with the country right now, and the fact that OWS hasn’t come up with a solution for all the country’s woes in, oh, a little less than two months, isn’t a poor reflection on the movement, but rather a reflection on the media demanding the impossible.

What the media can’t seem to grasp is that any specific OWS policy demand would die instantly in the Congress we currently have, and so OWS chooses to fight back the only way it can—by living outside of the system and physically resisting.

Yet, to the media, the movement remains a mystery—shapeless, leaderless, existing everywhere and yet refusing to adhere to a traditional hierarchy. This is new, scary and therefore must be comprised of a tribe of dirty, bongo-playing hippies.