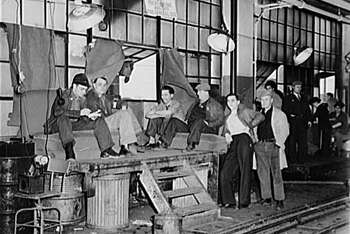 Occupy has gone viral. First we had flash trading, then flash mobs, and now a flash movement.

But this is no flash in the pan.

The Occupy movement is here to stay, come hell or high water, because the status quo is unacceptable. Not since the 1960s and 1930s have tens of thousands of people been this defiant and determined to win economic and social justice. What is unfolding is in many ways a synthesis of the movements of those eras.

Our emphasis on mass, nonviolent resistance in the face of repression is a product of the civil rights movement. When four black students used the occupy tactic at a whites-only Woolworth’s lunch counter on February 1, 1960, they had no idea they would trigger a wave of occupations at lunch counters throughout the South and solidarity pickets at segregationist stores in the North.

Similarly, the Occupy movement spread to 250 cities and towns in every region of the country in less than a month. Occupy has even spread to South Korea, Pakistan, and Australia.

After the passage of the Civil Rights Act in 1964, Dr. King launched a Poor People’s Campaign which he saw as “the opening of a bloodless war to final victory over racism and poverty.” King was aiding a black sanitation workers’ strike when he was murdered in Memphis, Tennessee in 1968.

Today, the occupiers in Liberty Plaza sport buttons from the 1963 march for jobs and freedom where Dr. King gave his “I Have a Dream” speech, a sign that Dr. King’s struggle against poverty and racism did not die with him.

While it took a decade before the civil rights movement spread north into inner city black and Hispanic communities, it took weeks for Occupy the Hood to appear. The support of unions from the get-go allowed us to avoid the hardhat-activist divide that plagued the 1960s movements.

The occupy tactic was pioneered in the 1930s by the unemployed, veterans, and labor movements. The Bloombergville occupations that came just before Occupy Wall Street sought to highlight the plight of people affected by Mayor Bloomberg’s budget cuts by creating modern day Hoovervilles, the Great Depression’s shantytowns that thousands lived in after the lost their homes, jobs, and savings as the Hoover administration did nothing.

In the early 1930s, thousands of unemployed people occupied parks near city halls demanding jobs, unemployment benefits, and government relief. Many of these occupations were dispersed by the police, but they succeeded with the creation relief programs and public works projects.

In 1932 tens of thousands of unemployed World War One veterans occupied Capitol Hill in Washington, D.C. seeking the bonus Congress promised them for wages lost while they served in European trenches. They were brutally dispersed by the U.S. military, but ultimately won when Congress passed the G.I. bill in 1944 giving veterans money for college and low-interest loans to buy homes and start business.

Workers in Flint, Michigan occupied their factories in 1936, sparking copycat actions in workplaces all over America that eventually gave birth to the AFL-CIO.

History came full circle when the AFL-CIO, created by the occupy tactic, mobilized its members early Friday morning to block Mayor Bloomberg from evicting us. The Occupy movement and the unions are catalysts for one another. We march with union workers locked out by Sotheby’s, with Verizon’s union members, and alongside postal workers who are fighting mass layoffs. Because of the Occupy movement, the AFL-CIO recently signed up 25,000 new, unorganized workers in one week.

Some of us may not realize it, but we stand on the shoulders of the giants who came before us.

Pham Binh’s articles have been published by Asia Times Online, Znet, Counterpunch, and The Indypendent. All of his writings on Occupy Wall Street and other topics can be found at www.planetanarchy.net

This article was originally published by DissidentVoice.