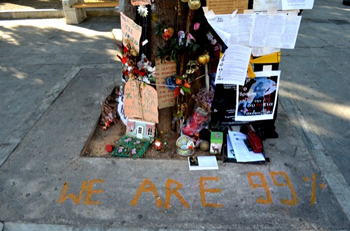 From a glance at a recent front page of The New York Times, you might guess that a political meeting in Athens this week would be full of talk about the resigning prime minister, bailout deals, and the Euro. The land that gave birth to European civilization now seems on the brink of sinking the whole continent’s economy. But, among those gathered on Monday in a basement in the neighborhood of Exarcheia—a kind of Haight-Ashbury for Greek anarchists—the agenda was completely different. They talked instead about parks, public kitchens, and barter bazaars. They even seemed pretty hopeful.

The lack of concern for political figureheads, in retrospect, was to be expected. Greek anarchists see no more reason to care about whether George Papandreou goes or stays than those at Occupy Wall Street are agonizing over Herman Cain’s sexual foibles. They have another kind of politics in mind.

The meeting, convened by a group called Assembly for the Circulation of Struggles, consisted of progress reports from neighborhood assemblies around Athens. Located down some stairs under a graffiti black cat, the basement included a ping-pong table, a kitchen, a bar, and a selection of radical books in Greek. (“If the books do better than the bar,” said a woman who would know, “we consider that a good night.”) For five hours, 50 or so people sat in an ovular jumble of plastic chairs and cafe tables, smoking hand-rolled cigarettes and nursing beers. Among them were Argentine activist Claudia Acuna and Marina Sitrin, a New York-based activist, lawyer, and scholar who has been a central organizer of Occupy Wall Street since the planning stages. The Assembly had just published a Greek translation of Sitrin’s book, Horizontalism: Voices of Popular Power in Argentina. Thanks to Acuna and Sitrin, the conversation about neighborhoods got a little more global—a spitting image of the emerging global justice movement that is focused less on shuttling around to particular economic summits, as was common a decade ago, than on occupying public spaces everywhere.

“In New York, we’re still the baby movement in the world,” said Sitrin. Since Occupy Wall Street began on September 17, occupations and open assemblies have spread to more than a hundred cities and towns around the United States. But assemblies are only starting to find their way from the central squares into neighborhoods and workplaces, where most people spend most of their time, and where many of their most vital concerns lie.

The Argentines and the Greeks have had more practice. Following the economic collapse and popular rebellion in late 2001, non-hierarchical, “horizontal” assemblies appeared across Argentina, reopening closed factories and occupying defunct banks. When the government stopped being able to provide basic services, people organized on the local level to provide for themselves. Since then, the assemblies have both lived on and faltered, while the national government increasingly tries to co-opt and supplant them. 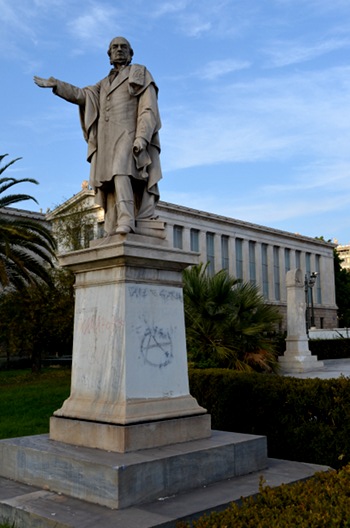 As does Argentina, Greece has a long history of anarchist thought and practice. The most recent iteration dates back to the riots of 2008, following the shooting of a teenage boy by police. The country’s economic crisis of the past two years and the government’s effort to respond with austerity measures has only strengthened the movement. There have been enormous, volatile protests and occupations in Athens’ Syntagma Square, which spread images of Molotov cocktails and riot police around the world. But those protests also gave birth to assemblies, as people revived the terminology of ancient Athenian democracy to explain their participatory, non-hierarchical decision making process. Since the recent demonstrations at Syntagma, such assemblies have became the norm among activists from around the country, who have now taken assemblies home with them.

Like the Occupy movement in the U.S., Greek protesters have often been blamed for being selfish, impractical and short on clear demands. But, to the anarchists like those the Assembly for the Circulation of Struggles gathered on Monday, such complaints ring hollow. (Graffiti on the metal covering the windows of a post office on Syntagma Square reads, “CAN A REVOLUTION BE SELLFISH.”) Rather than demanding particular reforms of the government, they focus on creating alternative institutions to replace it, actively resisting by getting a head start on building the world they want to see.

Gandhi called this kind of work the “constructive program”—as he put it, the effort to achieve “complete independence by truthful and nonviolent means.” Toward the end of a life spent building ashram communities, wearing homespun cloth and preaching self-reliance, he came to see the constructive program as the most vital part of a transformative resistance movement. 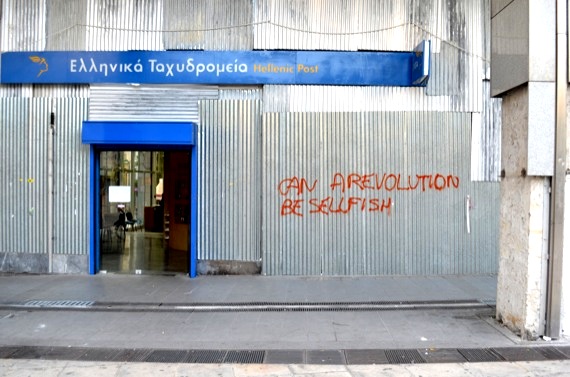 As they take hold in neighborhoods, the Greek and Argentine assemblies are concerned less with ideology than with finding direct ways to address the needs of people and the crises of the community. One man with long hair running down his back—characteristically Greek—reported on how his assembly built a park on a block that was slated to become a parking lot, while another described efforts to save preschools and public entertainment from being lost to privatization. Politics, however, becomes unavoidable. Everyone who uses a reclaimed park, or sends a child to a reclaimed school, is taking part in an act of political resistance. They’re radicalized by implication, by necessity.

Both the Greek and Argentine autonomous movements have dealt with a lot of ideological infighting, especially as various leftist political parties try to use the assemblies to win recruits and parliamentary votes, distracting from the assembly’s own agenda. Since open assemblies can thereby become too unwieldy, some anarchists have started smaller, closed assemblies with more rigid philosophical boundaries.

In the United States, says Marina Sitrin, “Our leftist political parties are nothing compared to those in Argentina and Greece.” The Democratic Party much less impact on American radical groups than do the smaller communist and socialist parties that parliamentary systems allow to flourish elsewhere.

What worries Sitrin especially about Occupy Wall Street right now is another form of co-option. The Greeks smiled half enviously when she said, “Only in the U.S. do you start a movement and people give you money.” But Sitrin wasn’t bragging. “As a movement, we can’t have money. It’s a massive problem.” When supporters start donating large quantities cash—as opposed to actual necessities like food and blankets—they threaten to turn the movement into a bureaucracy, or worse.

With their country’s economic crisis worsening, the Greek anarchists said they are similarly worried that aid money pouring in will enrich bureaucratic NGOs, while further accustoming people to taking handouts from above rather than providing for themselves. Claudia Acuna nodded knowingly.

Instead, the anarchists are trying to create alternative economies, through projects like public kitchens and barter markets for clothing and other necessities. As in Argentina, doing so has meant weaning people away from the taboo against using second-hand goods or from accepting food when one can’t afford it—a taboo the anarchists blame on the capitalist state’s false promises of a luxurious life for all.

As the evening went on, the different assemblies described their plans for the future. One is organizing a demonstration on motorcycles. (Motorcycle helmets and leather jackets are as common among Greek activists as messenger bags and fixed-gear bicycles are for their U.S. counterparts.) A union of delivery workers is trying to create a new vision of labor in their industry based on a four-hour work day. Through assemblies of assemblies, neighborhoods are also taking part in larger-scale resistance campaigns, including ones against a new tax on electricity and the privatization of public transit. The Greeks asked Sitrin about last week’s “general strike” organized by Occupy Oakland, and she in turn asked them about how the various occupations in the U.S. might coordinate with each other better. 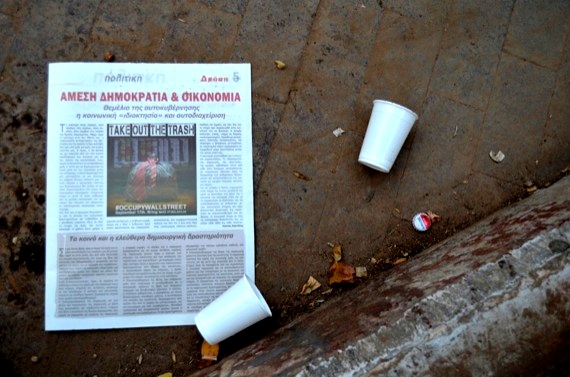 Around two in the morning, a pair from the Assembly for the Circulation of Struggles finally drove Sitrin and Acuna back to their hotel, roughly tracing the marching route from Exarcheia to Syntagma Square. They passed, and mourned at, a bank once torched by Molotov cocktails, accidentally killing three people inside. Though earlier the Greeks had been joking about which beer bottles to use for Molotovs, this time they spoke of the bomb-throwers as uncontrollable kids, as “not really even anarchists.” They passed the columns around the square where marble had been torn off and thrown at riot police. A handful of police with shields were still stationed nearby, just in case.

At least as much as the riot police, and hopefully more, that evening’s meeting seemed like a sign of things to come: a global resistance movement coming together to face global problems. It’s being built, however, around the particular needs of local communities, of people who are learning to organize themselves and resist in the course of providing for one another.