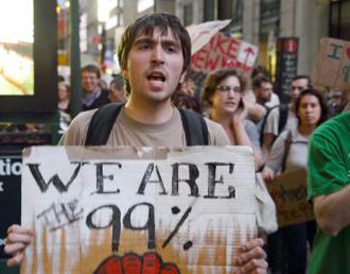 Billionaire Mayor Michael Bloomberg says the NYPD’s raid on the Occupy Wall Street encampment in New York City was merely to ensure security and public health, without limiting the right to free speech–and his words were parroted by mayors and the media around the U.S. to justify other assaults.

But then Police Lt. John Pike showed the world what’s really going on.

A cop at the University of California Davis, Pike carried out the sadistic pepper-spraying of students during a peaceful November 18 sit-in–capturing in an indelible image the vengeful and violent crackdown on the Occupy movement that has been ordered by the wealthy and powerful across the U.S.

The raids, the arrests and the police violence are about trying to silence a movement that is giving voice to the accumulated discontent of the working-class majority in U.S. society. They’re also about showing who’s the boss–the political and business establishment.

As for free speech and democracy, the real attitude of the 1 percent was on full display in a November 21 Wall Street Journal editorial that reeked of contempt for ordinary people and hatred of anyone who dares to take a stand for justice:

In New York City and elsewhere, the occupiers reacted to being cleared out of their aromatic tent-towns this week by breaking the law and disrupting the lives and work of people trying to earn a living.

The logic–perhaps not the right word–of these protests seems to be that by inconveniencing millions of people the protesters will inspire a political revolt of the exploited masses. More likely, they will inspire the masses to be revolted by this vanguard of the college-educated proletariat.

America’s elite think they’ve put our movement in its proper place–intimidated by the police powers of the U.S. state and pessimistic that any real change can be achieved.

But they’re wrong. The Occupy movement has already changed the way millions of people think about their lives, the world they live in, and their political beliefs–and that isn’t going away, whatever form the struggle takes now.

In just two months of existence, the movement has shifted the national debate by casting a spotlight on the question of corporate greed and economic inequality–no small achievement given the stiflingly narrow discussion permitted in the corporate media. Occupiers have shown that it’s possible to win wide support for some powerful left-wing arguments–tax the rich, create jobs, end the wars, hold political leaders accountable.

And the struggle has brought together many thousands of people who want to do something about all this–and do it now. Whether they could maintain permanent encampments or not, local Occupy movements have been a political gathering place for both veterans of labor and grassroots organizing and people completely new to activism to find each other and make common cause.

Many Occupy actions have been about the outrageous attacks on the right to free speech and peaceable assembly–that is, about defending our right to protest at all. But the movement has also been deepened by linking up with working people’s struggles of all kinds, from resisting budget cuts and school closures to supporting strikes and efforts to block evictions from foreclosed homes.

If the movement isn’t yet capable of the kind of mass civil disobedience that can defend the camps everywhere, it has nevertheless created new networks of activists who now have the practical experience of mutual solidarity to put to use in the struggles ahead.

From the general strike call in Oakland, Calif., that shut down the city’s port November 2 to the pickets in support of locked-out workers at Sotheby’s in New York and uncounted anti-eviction protests in many cities in between, Occupy has shown the potential to build a mass, activist left in the U.S. for the first time in decades.

The question for activists in many cities now is whether and how to rebuild encampments that have been wrecked–with their former sites turned into “free speech-free” zones by police and local authorities (almost all of those authorities Democrats, by the way).Some voices on the left are advising the Occupy movement to shrug off the loss of the camps. According to this argument, activists can now change focus from the narrow question of defending their right to occupy public space against the forces of the state to the broader issues that the struggle has connected to in the past few months.

But while these broader issues are certainly very important, those who want to move on are missing some crucial points.

First of all, the national security state, engorged by hundreds of billions in spending since the September 11 attacks, is now being used against those who simply wish to critique a society in which 1 percent of the population controls nearly 40 percent of the wealth–and question a system of laws that says corporations are people and therefore have the right to purchase both political parties, lock, stock and barrel.

That encroachment on basic democratic rights has to be challenged. Activists should keep up the heat on politicians like Michael Bloomberg or Chicago’s Mayor Rahm Emanuel–who tailor their interpretation of First Amendment rights to cater to the interests of the 1 percent.

The importance of such struggles over the right to protest and against police violence were clear from the massive rally and General Assembly November 21 at UC Davis in response to the pepper-spraying of demonstrators. Around a quarter of the entire student population–and maybe more–attended, according to estimates.

Second, the encampments at Zuccotti Park and other public spaces were more than symbols of the movement. Occupy camps and the structures that have arisen in conjunction with them provide a space for people to connect to the struggle–where they can raise their own grievances, learn about the issues and hear discussions about what we’re trying to achieve and how.

In cities where the camps have been broken up–as well as those, like Chicago, where a permanent encampment was never established–activists have to consider how to maintain this open interplay.

Another important question for the movement is its attitude toward the mainstream political system. On the one hand, unions such as the Service Employees International Union SEIU and liberal organizations like MoveOn.org, want to use Occupy as a brand for their multimillion-dollar electoral efforts–starting with an “Occupy Congress” tent city in Washington that’s intended to put heat on House Republicans, but not Barack Obama and the Democrats.

One of the great strengths of the movement in its first months has been the willingness to critique the Washington political system as a whole, not just one wing of it. In fact, most of the activists who came to Occupy are looking for ways to build a lasting movement in their own communities, while forging ties with like-minded people in other localities.

For them, it’s important to consider what Occupy has achieved so far. It has validated the feelings of tens of millions of working people who are furious at the way the people who run the banks and big corporations have continued to thrive despite the economic crisis, even as working people keep losing ground–if they’re not forced into desperation through debt and the loss of their homes and jobs.

Keeping that spirit at the center of the struggle is the key to the future.

The sustained offensive against the Occupy movement isn’t just about police repression. There’s an ideological component–and some of most prominent figures carrying out this campaign claim to support the ideals of the struggle.The next time you hear a supposed liberal like the chancellor of the University of California-Berkeley justify a police crackdown by declaring that Occupy tactics of nonviolent direct action have nothing to do with the 1960s civil rights movement, consider these words from Martin Luther King Jr.. They come from a speech in 1967, the last year of King’s life, just before he called for a Poor Peoples Movement to establish—yes, an encampment–in Washington, D.C.:

The movement must address itself to the question of restructuring the whole of American society. There are forty million poor people here. And one day we must ask the question, “Why are there forty million poor people in America?” And when you begin to ask that question, you are raising questions about the economic system, about a broader distribution of wealth. When you ask that question, you begin to question the capitalistic economy. And I’m simply saying that more and more, we’ve got to begin to ask questions about the whole society.

Those questions have gone unanswered for more than 40 years, even as politicians annually use the holiday in King’s name to assure us of their commitment to equality.

Now, Occupy has raised King’s questions again. Yet while King was focused primarily on the struggles of African Americans and the poor locked out of the American Dream amid a booming economy, today, the entire U.S. working class faces a deep and permanent cut in their living standards through wage cuts, joblessness and sweeping reductions in what remains of the social safety net.

In King’s day, politicians promised African Americans, women and others struggling for change that if they were patient, they’d see results…someday. Today, however, Democratic and Republican politicians are marching in lockstep to impose austerity, austerity and more austerity.

Our future, they tell us, is going to get worse–and we’d better get used to it. The only debate is over how much more to cut, rather than creating jobs and devoting resources to those in urgent need.

Now, the Occupy movement has followed King’s advice and begun “to ask questions about the whole society.” And activists have gotten an answer from authorities–in the form of a near-lethal police tear gas canister fired at the head of Iraq war veteran Scott Olsen, pepper spray down the throats of Davis campus protesters, the trashing of the library at Occupy Wall Street and military-style police sweeps of Occupy encampments across the U.S., coordinated in a conference call of double-talking Democratic mayors.

But Occupy isn’t defeated. On the contrary, activists are debating how to take up new challenges–from helping the International Longshore and Warehouse Union activists take on union-busting by the grain giant EGT to preparing for big labor contract showdowns for transit workers in Chicago and New York.

Many other smaller struggles are newly infused with people and energy as activists who stood up to the political lies and police nightsticks join the fight. Occupy, after all, has the support of the working class–and to move forward, it has to involve itself in workers’ struggle wherever possible.

The loss of the encampments is a blow, but not a fatal one. In France, after May 1968, a popular poster put it this way: “Beginning of a prolonged struggle.”

Occupy may not have reached the level of the French events of ’68, but it’s clear that we’re at the start of something, with bigger battles to come. The time to prepare for those battles is now.