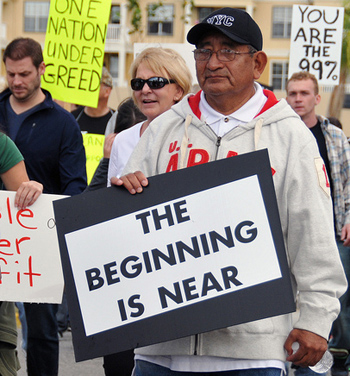 As the live-in protest at Liberty Park approaches its second month, numerous occupations in other cities — including Los Angeles, Portland and Boston — have announced plans for a Nov. 17 National Day of Action. Labor groups, including the Service Employees International Union and the AFL-CIO, have already come out in strong support of this burgeoning nationwide rally.

Earlier this week, the New York City General Assembly (the self-governing system through which the Occupy Wall Street encampment makes decisions) announced on its website that one of its Labor Outreach Committee subgroups would be coordinating actions for Nov. 17 in tandem with labor allies. In a press statement released by several of the occupations within the days that followed, organizers called for “a day of peaceful direct action to reject the economy that divides us.”

The Occupy movement, which has increasingly found support among labor activists who want to create a broader working class movement on the left, has on several occasions allied itself with local worker struggles, including numerous actions in support of locked-out Sotheby’s workers.

As of press time, Occupy Los Angeles, Occupy Together, Occupy Philly, Occupy Pittsburgh, Occupy Sacramento and the Occupy Wall Street official Facebook account have all announced they will be participating in this day of protests, rallies and civil disobedience. According to the Occupy Wall Street media team, 12 cities had confirmed serious coordinated actions as of Thursday morning, including Portland, Boston, Seattle, Milwaukee, Detroit, Minneapolis, Baltimore and Miami.

Occupy Los Angeles vowed to block the 4th Street Bridge in downtown Los Angeles for two hours starting at 7 a.m. on Nov. 17. MoveOn.org has also promised to support the event, using the day to highlight a “national economic emergency.”

The National Day of Action is the latest in a series of alliance-building actions that have attracted new supporters to the Occupy movement while also educating the public about corporate greed and the need for democracy. The announcement of the Nov. 17 action came on the heels of the beginning of a march from New York City to Washington, D.C. Dubbed “Occupy the Highway,” the march, which began Nov. 9, is scheduled to arrive in the nation’s capital on Nov. 23 — just in time for the Congressional “super-committee” deadline to announce a deficit-reduction plan.

Trekking an average of 20 miles a day along a 240-mile route through New Jersey, Pennsylvania, Delaware and Maryland, protesters are demanding an end to the Bush-era tax cuts and the launch of a fairer economic system for the 99 percent.