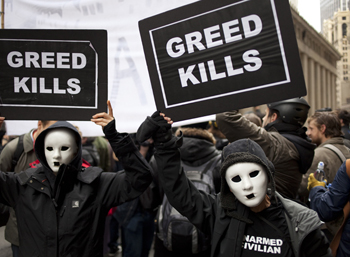 One of the most powerful and interesting things about the Occupy Movement is its reach well beyond Wall Street or even the smallest tent encampments around the nation. The power to bloom and spread has been in its simultaneously coordinated actions combined with the movement’s lack of demands on its own activists to comply with just one assigned set of tactics dictated from afar. Its lack of a consolidated power structure or the control of one mastermind compelling allegiance has strengthened the movement in ways that confounded not only the mainstream media but also the mainstream mindset.

What we used to call the establishment in the 1960s had become so enamored with itself and so entrenched that its generals cannot fathom what happened or why. Rest assured, what has been reported by many as a lack of specific demands or direction coming from OWS ought not be confused with a lack of specific demands or direction. Abusers often act confused when the abused dare to finally confront. They deflect attention back to the abused. So the coward bares its cowardice.

The OWS movement has broken the ice for a torrent of pain and suffering to be acknowledged. One person with one sign in Alaska was an occupation just as significant as a handful in Maine or as 10,000 in Portland. One person’s pain expressed on a hand-scrawled sign about student loan debt out of control was just as significant the next person’s cry about being foreclosed or another’s struggle to find a job at a living wage and a neighbor’s inability to access healthcare while ill. “We are the 99 percent,” is the unifying cry. And we are hurting in a thousand ways at the hands those entrenched in power over us.

The OWS movement allows us to claim a place of pain, and when our broken parts are meshed together they make one huge and unbreakable force. We may not yet know where our force will ultimately take us, but we commit ourselves to outcomes that heal and uplift one another.

Millions of people across the country and the world have watched for decades as those in the omnipotent class lorded their omnipotence over every corner of every life and every community everywhere. Greed for money was not the only motivation. Greed for control, greed for celebrity and greed to be perceived as “the one, the only” elevated maniacal tyrants in boardrooms and political structures where abusing the many for the benefit of the few became a way of life.

We were encouraged to celebrate the business and political leaders who saw themselves as courageous enough to inflict pain and then demand loyalty and praise. The ability to be cruel became a valued character trait rather than a flaw. We immortalized might as right in our financial lives, our working lives, our political arenas and then as a consequence lost our way. It’s hard to see a way out when a whole culture embraces the abuse and the abusers.

The OWS movement offers a thousand ways out, and not all of those ways have to be viewed from tent or on the receiving end of a pepper spray gun or in a jail cell. No one has been shamed for not being beaten or not pitching a tent. No one has been shamed for not being cuffed or not marching. Because the reality for millions in the 99 percent is that they are not in the physical time or space where they can so engage in the public squares or in New York City. But that has not excluded them from being in the 99 percent, and it has not excluded them from knowing they are part of the movement. That is power. When nurses were arrested in Chicago for refusing to take down the first aid station for Occupy Chicago and the occupiers there surrounded them with support and compassion, that is power. That is a movement that honors the many who are suffering and celebrates those fighting more publicly. That is power. That is a movement that will preserver. We fight for and with each other. We cracked the power code.

It is interesting. The people in the entrenched establishment (media, political, corporate or otherwise) have long supported one another by advancing the issues and policies that keep them entrenched and in control. That establishment has not demanded one issue or one set of demands or even one political leaning of its loyal members. The only loyalty required was that to the idea that money and great wealth over others was supreme. If only one industry needed a tax break or special favors, it was unlikely that another industry would block that effort. The wealthy and powerful interests stood together in that way, and no one questioned the overarching agenda of protecting the golden turf for those similarly situated.

So, don’t worry if the mainstream, established media or political powers act like they don’t get it. They understand the occupy movement just fine. Forgive them as they stand in disbelief that the 99 percent might just have embraced the issues and the space that rightfully belong to the many and not the few. It will be painful for the entrenched power structure to let loose of any of its great wealth much less its accoutrements of power. But let loose they must, and the OWS movement will be here until they do.

When the actions unfolded on Thursday, November 17th, in NYC, as the numbers of protestors hovered at a few thousand during the day (or “several hundred” as the mainstream media wanted the world to think), it was powerful to watch from afar. When 5 p.m. hit and tens of thousands more came out from work and swelled the numbers of protestors to more than 32,500 (estimated by a NYPD officer tweet), it was an inspiration and an affirmation that we are – all of us – the 99 percent.

I suspect the occupy movement advocates will stand with one another and together as a movement as the issues faced are addressed, one by one, until the nation and the world is a more just place that reflects the interests of 99 percent of its inhabitants. And in living rooms, in work break rooms, in rooms where the sick wait for health and where those who care for them are helping, in communities and schools and churches, there are millions of people taking courage and claiming hope from the actions of a movement long overdue but so welcome. We are the 99 percent.