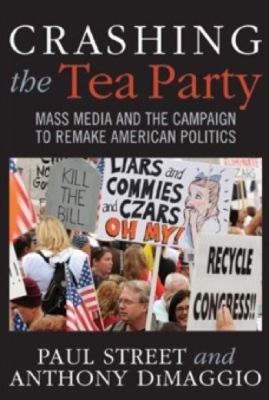 Crashing the Tea Party Mass Media and the Campaign to Remake American Politics
by Paul Street and Anthony DiMaggio
Paradigm Publishers, 2011
Media depictions of Occupy Wall Street (OWS) generally have focused on various police clashes and the pepper spray and fist flying YouTube videos that could be dubbed “white shirts gone wild.” Other coverage claims not to understand the protests or laments the lack of demands or worse is condescending. There is a third narrative building: OWS is the Tea Party of the left.

Before you accept this line, read Crashing the Tea Party by Paul Street and Anthony DiMaggio. The book is a take down of the Tea Party – the authors do not think it qualifies as a party – and its members the book describes as, “predominantly white, significantly racist, militaristic, narcissistically selfish, vicious in its hostility to the poor, deeply undemocratic, profoundly ignorant and deluded, heavily paranoid, wooden-headed, and over reliant on right-wing news…” Any questions?

Crashing the Tea Party relies heavily on media reporting and polls taken over the past two years to glean info on Tea Party activists but offers only brief anecdotes from attending some party events in the Chicago area as their own research. Nevertheless, the book does not feel thin and successfully defends its thesis: the Tea Party is not a social movement or an independent party but akin to a special interest group dedicated to the election of right-wing Republicans. This analysis has become clearer as OWS draws upon populist anger over financial deregulation, growing economic inequalities and runaway corporate spending in elections to name a few of the themes to be found on pizza boxes and signs in Zuccotti Park.

But flash back to the period before the 2010 midterm elections and Ben McGrath’s New Yorker piece “Movement,” and the Tea Party is portrayed as the voice of ordinary Americans. Instead of fury at Wall Street greed, Tea Party activists peddle conspiracies and appear loosely organized, but willingly to elect Republicans. Street and DiMaggio point to Time magazine and other media outlets portraying the Tea Party as upending “elites” and “establishment candidates.” The authors buy none of it and cite CNBC’s Rick Santelli’s infamous rant against bailing out your neighbor’s mortgage that was delivered at the Chicago Board of Trade of all places. The OWS slogan, “We are the 99 percent” was mocked by the very same floor traders who cheered Santelli’s rant by posting “We are the 1 percent” across the Board’s building windows. There’s also the issue of the Koch brothers – who stand to benefit from government deregulation – and former Republican congressman Dick Armey’s Freedom Works subsidizing the growth of the Tea Party. Crashing the Tea Party does believe the Tea Party has a small activist base that captured broad anxiety over the Great Recession though argue their corporatist agenda of slashing millionaire’s taxes and the remnants of the New Deal to be unpopular to most Americans. The book also acknowledges the Tea Party’s influence over the national political dialogue, albeit amplified by another corporate sponsor, Fox News.

So what of OWS? There is little formal polling to say, but anecdotal evidence suggests they are not the Democratic base and possibly minus union leadership, will not fall in line behind President Obama come 2012, barring some dramatic reversal of his administration’s policies. While OWS’s general assemblies can tax your patience, they are democratic and a far cry from backroom strategy meetings with the Koch brothers and Glenn Beck. OWS is the Left finally rearing its head during deep economic turbulence and it’s about time.