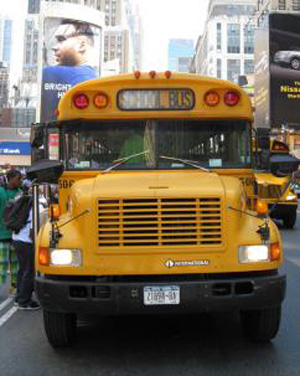 New York’s City Hall and Department of Education are pushing union school bus drivers and attendants toward a strike that would affect service for some 152,000 students, including 70,000 students with disabilities.

Officials from Amalgamated Transit Union (ATU) Local 1181 say a strike is “likely,” though no date has been set. The dispute is over the city’s reversal of policy on a crucial job protection provision that school officials until recently promised would be preserved for the sake of student safety. Apparently, Mayor Michael Bloomberg and his administration have decided that risk is worth it if they can break the union.

Parents of students who get yellow bus service became aware of the conflict from a letter sent home with students from Schools Chancellor Dennis Walcott warning that the union was threatening an immediate strike, and suggesting that parents make alternative arrangements for getting their children to school. The letter was clearly meant to whip up pressure against the union.

At issue in the dispute are bidding requirements for companies competing to win contracts to provide busing to infants and toddlers receiving Early Intervention services, as well as pre-K and preschool special education students. The union representing drivers for these buses want the same job protection provision that exists in bids for busing around 138,000 “school-age” students from kindergarten through high school.

The provision requires bus companies making a bid to agree that drivers laid off by unsuccessful bidders be given priority in hiring, according to seniority. The provision is designed to make sure bus companies won’t attempt to lower their bids by hiring less experienced and lower-paid drivers.

The provision has been included in the contract bidding process for busing school-age children since a 1979 strike that lasted three months and ended in a major victory for the union. It hasn’t been part of bids for transporting younger children because these contracts were previously awarded by the city’s Department of Transportation rather than the DOE. The city has been preparing to transfer this responsibility to the DOE for some years and took the position that there should be uniform terms.

Lawyers for the city argued that including the provision would enhance safety by ensuring the most experienced drivers and attendants were transporting young children. But state courts ruled in favor of the companies’ claim that the job protection provision was unfair. Last June, the New York State Court of Appeals confirmed lower court rulings that barred the city from including the provision in bid requirements for early childhood transportation.

The city responded to the string of unfavorable rulings by asking the state legislature to pass legislation that would allow it to keep the provision–essentially asking lawmakers to undo the court rulings. The city’s lobbyist wrote that passing the legislation “would ensure stability of services for vulnerable children” and would avert the likelihood of a strike. The legislature heeded the city’s call and passed the legislation in July 2011.

At this point, a strange thing happened. The city reversed course and asked Gov. Andrew Cuomo to veto the legislation–and he obliged. In other words, Bloomberg’s administration succeeded in getting the legislation passed in order to assure the safety of “vulnerable children”–and then got the same bill killed by the governor.

Now, Bloomberg and Walcott are taking the bus companies’ side and attacking the union. They say they will file a complaint with the National Labor Relations Board in the event of a strike, claiming that a walkout would be illegal since the collective bargaining agreements are with the bus companies, but the strike would be demanding action by the DOE.

It’s obvious what’s behind the city’s about face: Bloomberg and friends realized they were passing up an opportunity to weaken union power, so they’re now making up for lost time–even if that means provoking a strike that will cause severe hardships for the families of some of the school system’s most vulnerable children. No doubt the Bloomberg administration and the DOE–not to mention the transportation companies who bid to operate yellow buses–see a chance to end job protection for drivers in the bid system for busing older schoolchildren when those transportation contracts expire in December 2012.

New York’s two tabloid newspapers, the Post and Daily News–owned, respectively, by billionaire Rupert Murdoch and billionaire Mort Zuckerman–happily joined in the union-bashing. They managed to avoid any account of the roots of the issue and instead focused on the very real difficulties a strike would cause for parents.

On the other hand, the media managed to refer to Local 1181’s history of corruption. Former union officials have been indicated for receiving kickbacks from busing companies, and the local was placed in receivership in 2005. But there’s no relationship between union corruption, which victimized the members, and the current dispute with the city. The only purpose in reviving these stories is to discredit the drivers and attendants before any possible strike.

The city’s duplicitous conduct is largely unknown to parents, thanks to the media’s one-sided coverage. Most parents, however, understand the difficulty of the job and the vital importance of qualified, experienced personnel driving buses for very young children, many of them disabled.

One man, the parent of a 15-year old with autism who receives door-to-door transportation to and from school, didn’t know the details of the dispute, but said his sympathies were with the drivers and attendants. As he said in an interview:

God bless these people! That’s all I can say. My son isn’t easy, especially in the morning. If he doesn’t want to go to school, and he’s in one of his moods, he’ll charge on that bus yelling and screaming. They just smile and say, “Good morning,” and treat him just like me and my wife do. There’s peace of mind knowing they know how to deal with kids with special needs like my son.

The parent said he thought bus personnel deserve the job protections the city wants to take away. “Why should they work hard and learn how to do what they do, and then get replaced by God-knows-who with no experience?” he said.

The parent said he wouldn’t be comfortable with nonunion drivers:

First of all, that’s my boy–you know what I mean? I’m not trusting his safety with some cowboy off the street. Second, it isn’t right. I don’t know what we’ll do, because we can’t really take him to school and get to work on time. Then again, there’s two of us, and we have a car. Other people are alone and have to take the bus, so I guess we’re the lucky ones.

Given Bloomberg’s overall drive to push through budget cuts for the schools, while pushing the corporate “reform” model of high-stakes testing and charter schools with a campaign that scapegoats teachers, it’s not surprising that the mayor favors discarding another group of school employees with experience for the promise of a small cost savings.

The attempt to blame bus drivers for a situation the city created itself should be countered by efforts to educate the public–especially parents of children who would be affected by a strike–about what’s at stake in this dispute. The link between child safety and job protection for bus drivers, repeatedly acknowledged by the city in the past, must be emphasized.

The threat of a strike could be averted if the city and state establishment put pressure on state legislators to override Cuomo’s veto of the job protection legislation–or on Cuomo to sign the bill if it passes again.

Some grassroots parent organizations have been organizing in support of drivers and attendants. Parents to Improve School Transportation (PIST), working with Class Size Matters, has posted a list of demands addressed to Deputy Chancellor Kathleen Grimm, a lawyer with responsibility for many areas of school operation, including transportation and school meals. Grimm is best known for attempting to ban homemade baked goods from school bake sales, while continuing cafeteria sales of pre-packaged cookies and junk food.

PIST has a 10-point “School Bus Bill of Rights” to improve safety and accountability in school transportation. Among these is safeguarding employee protection through legislation to “maintain an experienced, skilled and dedicated transportation workforce.”

Organizations like PIST are working to counter the DOE’s efforts to pit parents against transportation workers, including by joining in on the picket lines in the event of a strike. Meanwhile, other unions in the schools, such as the United Federation of Teachers, should actively support the drivers and attendants–because teachers will be all the more vulnerable if Bloomberg and Walcott get away with stripping them of their job protections.