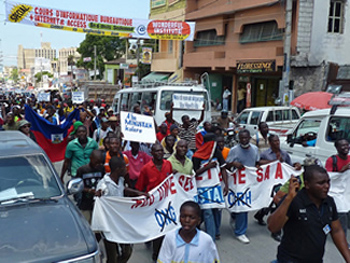 On November 18, thousands of people gathered outside the gates of the U.S. Army School of the Americas (SOA, now renamed the Western Hemisphere Institute for Security Cooperation) to stand in opposition to our government’s involvement in coups, assassinations, torture, disappearances, and other atrocities in Latin America and the Caribbean. Meanwhile, in Haiti, the new president, Michel Martelly, will officially present his plan for the reconstitution of the Haitian army. Although these two events will be separated by over 1000 miles and occur in two different countries, they are directly related.

Twenty-one years ago, the School of the Americas Watch was founded when a small group of friends and I carried out a hunger strike at the gates of Ft. Benning to call for the closing of this school . Today, the movement has grown to the thousands, and our goal remains that of shutting down the now notorious U.S. military facility that has trained numerous Latin American and Caribbean generals, police, and paramilitaries in the brutal techniques through which the poor and disempowered people of the region have been prevented from having a greater role in making decisions that affect their lives. Some of the Western Hemisphere’s most notorious human rights abusers are SOA graduates, and they include Maj. Joseph-Michel Francois, a principal figure in the 1991 coup against President Aristide; other coup figures including Louis Jodel Chamblain, Guy Philippe, and Jean Tatoune also were trained by the U.S. military.

SOA Watch has long been in solidarity with the people of Haiti. Last month, I was part of a large delegation to Haiti to see first hand the challenges that people deal with daily. We met with dozens of people, and visited schools, churches, clinics, and camps for the many internally displaced persons. We listened to survivors of Haiti’s most recent coups, in 1991 and 2004, relate their stories of resistance to military oppression. We heard the first-hand accounts of rape survivors, some of whom were targeted because of their political beliefs.

One aim of our delegation was to witness how the UN Stabilization Mission in Haiti (MINUSTAH) interacts with the Haitian people. These “peace keepers”, who include 7,340 military troops from around the world, took over for U.S. Marines in June 2004, following the second coup against Aristide. A key part of MINUSTAH’s mandate is safety, yet some of the rape survivors we talked with told us that MINUSTAH offers them no protection, even though many more women and girls are now assaulted every day in the 801 camps populated by people who lost their homes in the quake.

We witnessed MINUSTAH’s overwhelming and often threatening presence firsthand. One of us – an octogenarian woman who has made frequent recent trips to Haiti– recounted how a MINUSTAH soldier had pointed his gun at her as she walked down a rural road, alone. We imagined what it must be like for a Haitian man, woman, or child to encounter MINUSTAH soldiers, perhaps several times a day, in their daily lives.

MINUSTAH’s record in Haiti is one marked by violence and scandal. We saw large bullet holes in buildings in Haiti’s poorest slum, Cite Soleil, where MINUSTAH conducted a violent raid in 2005 that left over a dozen unarmed civilians – including children – dead. Just a month before our visit, protests against MINUSTAH erupted in Haiti following the revelation of a video, captured on a cell phone, showing five MINUSTAH soldiers raping an 18-year-old Haitian man. Protests against MINUSTAH had occurred with regularity following the outbreak of cholera a year ago, and the subsequent evidence that UN troops were responsible for introducing the disease which has so far killed some 6,500 people and infected 457,500. Lawyers with the Institute for Justice and Democracy and the Bureau des Avocats Internationaux in Haiti have filed a complaint on behalf of 5,000 cholera victims seeking damages from the UN.

President Martelly has taken advantage of this anti-MINUSTAH sentiment to push forward a plan to reconstitute the Haitian army. While we gather at Fort Benning, Martelly is supposed to officially proclaim his plan, in Haiti. The father of Haitian independence, Jean-Jacques Dessalines, said, it is necessary to “ensure forever the empire of liberty in the country which has given us birth.” Yet the modern Haitian army never allowed the Haitian people to live in liberty. Before the army was dissolved, according to a national poll carried out at the time, the Haitian people had lived in fear. The SOA graduates and others who headed the Haitian army repressed the Haitian people, and Martelly is himself a past supporter of the coups against Aristide and a former Tonton Macoute – a member of the dictator Duvalier’s dreaded secret police. This is why people we talked to in Haiti oppose both the possible return of the Haitian army, and the ongoing presence of MINUSTAH. Both are military solutions to social and economic problems.

U.S. State Department cables made available by Wikileaks show that MINUSTAH acts as a proxy force for the U.S. military, “an indispensable tool in realizing core USG policy interests in Haiti,” as one cable states. Without MINUSTAH, “we would be getting far less help from our hemispheric and European partners in managing Haiti.” Other cables reveal that the U.S. government has acted to ensure that MINUSTAH’s mandate would not require the consent of the Haitian government. Another describes how, at the urging of members of Haiti’s wealthy elite, a former U.S. ambassador in Haiti gave the green light for MINUSTAH to conduct violent raids, such as the one in Cite Soleil, even though this would “inevitably cause unintended civilian casualties.”

Because of the U.S. role behind what is essentially a military occupation force, we must be similarly compelled to stand against MINUSTAH as we have been against the SOA. As with “la Escuela de Golpes”, as the SOA is known there, the people of Latin America are ahead of us, and have launched a campaign against their governments’ participation in MINUSTAH. A letter signed by Nobel Peace laureates such as Adolfo Pérez Esquivel, the Grandmothers of the Plaza de Mayo in Argentina, and various other prominent human rights figures in the region calls for MINUSTAH’s withdrawal. This month a continent-wide conference on MINUSTAH was convened in Brazil, with representatives of the many groups participating calling for MINUSTAH to leave, saying that “Haiti needs doctors, engineers, teachers and technicians — not occupation troops.”

As U.S. citizens, whose government has trained scores of military and paramilitary assassins and rights abusers, we must also stand with the Haitian people and demand MINUSTAH’s withdrawal as well as oppose plans to bring back the Haitian army. We must push instead for economic and social solutions to economic and social problems. Only then will Haiti truly be able to move towards a brighter, more hopeful future.