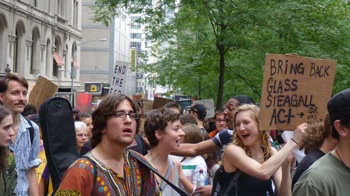 In Times Square on October 15, above us were the usual massive TV screens and blinking advertisements. But something different was happening on the ground. It echoed up and down Broadway: “We are the 99%!” You saw it in the signs that people held, saying “It smells like Spring.”

It’s only been a month, but the movement to Occupy Wall Street has started a wave. From the start with a handful of people staking out a spot in New York’s Liberty Park, thousands have joined the movement to demand an end to policies that benefit the rich and powerful at the expense of everyone else—the 99%.

I have spoken with the women we partner with in Guatemala, who have struggled to demand their labor rights and safe working conditions in sweatshops run by companies that make name-brand clothing for people in the US. They watched with satisfaction as US labor unions spoke out and joined the protesters in the streets.

Since February, the women we work with in Iraq have been leaders in weekly protests demanding jobs, an end to corruption and real democracy. (Sound familiar?) They have been beaten and sexually assaulted by security forces for daring to speak out. Still, every Friday, they return to Baghdad’s Tahrir Square. They were watching as the numbers of protesters on Wall Street only grew after the arrests and police violence. And they were watching when protesters in the US sent messages of solidarity and support.

Across the world, people are watching, hopeful that the people of the US have finally woken up. The signs are telling. The call to action that brought masses, in New York and around the world, to the streets on Saturday read “Neoliberalism is worldwide – it is the reason you no longer have a job, it is the reason you cannot afford healthcare, education, food, your mortgage.”

Communities worldwide are all too familiar with the destructiveness of neoliberal policies. In August, I was in Kenya for ten days. During that time, the price of certain food staples doubled. I was there to bring emergency aid to refugees of the famine in neighboring Somalia, but even middle class people are struggling to buy food.

One woman I met commented that the hike in food prices was a spin-off from the economic crisis triggered in the US—when financial traders shifted from the floundering housing market to speculating in the global food market. This type of speculation has taken off in the wake of the rampant deregulation championed by neoliberal policies worldwide. It is also one of the causes of the current famine in the Horn of Africa.

Treating basic necessities as trade-able commodities instead of human rights is the pattern endorsed by major international financial institutions like the World Bank and the International Monetary Fund, and by rich governments. For decades, they pushed these policies on the governments of the Global South as conditions for receiving development loans. We’ve seen the impact of policies imposing privatization, deregulation and caps on government spending on social services in the communities in which we work: a drastic rise in poverty and inequality.

In some of the places where neo-liberalism was first imposed, people have succeeded in overturning those policies. There is a wealth of models and strategies, allies and teachers, to which the protesters on Wall Street can turn. There are auto workers in Buenos Aires who occupied their factories to set up their own production. There are AIDS activists in South Africa who confronted corporate power to demand the right to health and treatment. And there are people in the Middle East who risked their lives this year to demonstrate that democracy means more than procedural elections.

Mainstream media have slapped every label on the activists on Wall Street, from ignorant stoners to destructive nihilists. They’ve said that the protests have no real demands. What they’ve ignored are the connections that bind the Occupy Wall Street protesters to economic justice movements worldwide and to the concrete demands that have been put forward, again and again, by organizations like MADRE and our partners.

There are viable alternatives to neoliberal policies. It is possible to regulate international trade, operate our global financial system and advance economic policies that benefit—rather than harm—people worldwide. We know it can happen, because women worldwide have already articulated and acted on these possibilities.

They are fighting to make sure that economic policies are negotiated through democratic processes that allow for effective community involvement. They are demanding that life-sustaining resources like food, water and medicines be treated as rights and not as commodities. They are calling on governments to live up to their obligations to provide basic services like health care, housing and education and to require foreign investors to contribute to economic development.

Because of grassroots women who have advanced these demands and more, while confronting the worst burdens of poverty, we already know what an equitable economic system would look like. We have seen what is possible when communities join together to confront corporate power and to create alternatives rooted in fairness and economic justice.

The protesters on Wall Street know what they want. It’s the same thing that the rest of the global 99% wants – a chance to build a good life for themselves, their families and their communities.

Yifat Susskind is the Executive Director of MADRE.

This article was originally published by ZNet.