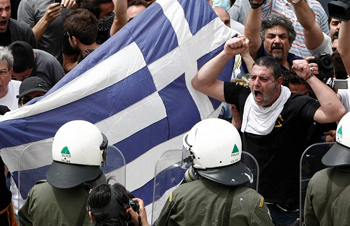 The latest phase of the Greek crisis (a crisis that is only part of the broader European and global capitalist crisis) illustrates the determination of political and economic elites in Greece and Europe to seal the future of ordinary Greeks without asking for their consent. Even more, it is an attempt to push further the devastating and ineffective attempt to solve the European debt crisis through a continuation of draconian austerity measures that have led not only to the spread and deepening of the crisis across the continent but also to mounting popular resistance.

The Greek Prime Minister George Papandreou’s decision to call a referendum on the latest European deal, which included a new bailout for Greece as well as a new round of austerity measures, was not motivated by a noble belief in the right of Greek people to have a say over the decisions that will affect their future. If democracy was Papandreou’s motivation, he would have called a referendum eighteen months ago, before the original bailout package and austerity measures, which were adopted in complete contradiction to the anti-austerity mandate that Greeks had given Papandreou in the fall of 2009. Papandreou was forced to call a referendum because the mounting popular resistance to the devastating effects of his austerity policies had weakened his government, drastically reducing the support he enjoyed not just from the general public but even from the base, labor unionists and deputies within his own party. In an attempt to relegitimize his policies, he chose a referendum because he knew that, according to all the polls, early elections would lead to his Socialist party’s most humiliating defeat in its history.

The announcement of a referendum threw international financial markets into turmoil and enraged European political elites, including French President Nicolas Sarkozy and German chancellor Angela Merkel. The latter summoned Papandreou to the G20 meeting and informed him that the referendum had to take place by early December and that the question had to be whether Greece would remain or leave the eurozone. In the meantime, the next installment of the rescue loan, necessary for the payment of public sector workers, would be frozen until Greece approved the terms of the new rescue loan, which included the commitment of the country to years of austerity policies. These developments led to a temporary revolt within the socialist party, forcing Papandreou to call off the referendum and to promise to form a coalition government that would accept and implement the terms of the latest rescue deal. Whether this government will indeed include any political forces outside the socialist party and who the head of this government will be remain an open question, as I write these lines.

Whether a true coalition government is formed or not, ‘political stability’ (in other words, the smooth continuation of the economic policies that have devastated the vast majority of the Greek population) is not likely to be restored. Class struggle and anti-austerity resistance have sharpened, taking a variety of forms from general strikes to demonstrations and occupations of public buildings. As all the polls show, support for the socialist and conservative parties, which have alternated in power since the fall of the military regime in 1974, has plummeted and this trend is likely to continue after the latest developments. Indeed, one of these developments was that Conservatives have now declared themselves to support the new rescue deal, even though they have not as yet agreed to participate in a coalition government. This is significant because it makes it harder for popular anger to be contained within the two-party system that has long served the interests of economic elites within Greece and beyond. If the conservatives were to relent to the pressure coming from Europe and agreed to participate in a coalition government devoted to the implementation of austerity measures, the two party system’s viability would probably be eroded even further. If they didn’t, elections might have to be called, prolonging global financial volatility and clouding the prospects of the eurozone. 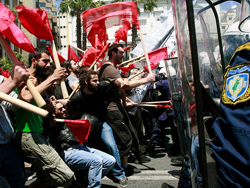 In this context, the responsibility of the Greek left to present a compelling alternative grows. Although the articulation of such an alternative is hampered by disagreements within the anti-austerity camp as to whether Greece should immediately declare a default and exit the eurozone and as to whether Greece’s situation is comparable to that of Argentina, which defaulted on its debt and unpegged its currency from the U.S dollar ten years ago, the global economic havoc that uncertainty regarding Greece continues to generate shows that Europe may still not be able to afford pushing Greece into a disorderly default. This means that Greece continues to have leverage over Europe and may still be able to say No to Sarkozy and Merkel’s extortionate demand that it continue austerity or face the prospect of bankruptcy and an exit from the eurozone.

For this to take place, a very different kind of government is necessary, one that would represent the interests of the millions of ordinary Greeks hit by austerity while also uniting the constituency of left wing parties with the growing number of voters disenchanted with the socialist and conservative parties alike. The natural candidate for carrying out such a political realignment are the parties of the Greek left. Although polls suggest growing support for it, the Greek left is, however, very fragmented and the largest segment within it, the Greek communist party, has long segregated itself from other political forces on the left. The stakes are high, as popular resistance to the austerity policies escalates. If the Greek left does not rise to the occasion, the sense of many protesters that the institutional left in Greece is itself a part of the problem will be confirmed and the articulation of an alternative capable of overcoming the politics of fear on which Socialists continue to rely (either we continue the painful road of austerity or we face the prospect of bankruptcy, ejection from the eurozone, an inability to pay public sector pensions and salaries, a collapse of the banking system and a drastically reduced standard of living for all Greeks) will not be forthcoming.

Other Related Articles by Costas Panayotakis:

Costas Panayotakis is a professor of Sociology at the New York City College of Technology (CUNY) and the author of Remaking Scarcity: From Capitalist Inefficiency to Economic Democracy (Pluto Press)