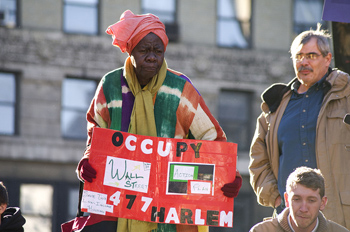 “I work at the airport,” says a well dressed Dominican woman as she stops by our West Harlem Halloween solidarity with Occupy Wall Street event. “I’ve been working there for twenty-six years and I make $14,000 a year. People think that because I wear a fancy uniform I make a lot of money. But after twenty-six years I still make $7.50 an hour. And I don’t have any sick pay, health insurance, vacation time, or benefits. I am the 99%.”

This was one of the many stories that we were to hear over the course of the two-hour event, organized by my neighbor Ely together with the West Harlem 99% group. “We shouldn’t be protesting the bankers,” said an African-American man, who was probably younger than his wizened features suggested. “We should be protesting the landlords. They suck every penny from you and you have nothing left to pay for food, clothes, medical bills, school fees. And that’s to live in a rundown apartment infested with mice. They never fix anything. We don’t care about bankers, we don’t even have money in the bank. But we’re being screwed every day by the landlords.”

A Puerto Rican mother of two said that when she was growing up there were decent public schools in the area. Now the public schools are overcrowded, underfunded, and squeezed into spaces with charter schools.

The predominantly African-American and Latino communities of the West Harlem area have long been struggling to fight unemployment, predatory lenders, gentrification, police brutality, and poor access to education and health services. These issues are now being highlighted more broadly as OWS moves into cities and neighborhoods across the globe. And slogans such as the 99% are producing new lines of solidarity that might bring together these different issues and help build connections between existing groups.

Chanel, an unemployed 28-year-old Puerto Rican woman who is an organizer with the West Harlem group, describes how the idea of the 99% appealed to the group over the idea of occupation. “We decided not to take on the Occupy name because people had negative feelings about it,” said Chanel. “These neighborhoods are already occupied through gentrification. But the vast majority of us are being affected by the economy and the 99% is a way of uniting us and bringing us together.”

It was through Facebook that Chanel first started hearing about the occupation at Zuccotti Park. After looking up information, she went down to Zuccotti Park to see what was going on. She was intrigued by what she saw: “I never thought that a group of five hundred people could get together and listen to each other and mold things, proposals that they decide on collectively. It’s messy and can be exhausting and you have to wait your turn. But when it happens, it’s so powerful, because you were a part of that. Even if you don’t agree with the final decision, you still feel good because the process is fair.”

Democratic procedure is at the core of the vision of the diverse West Harlem organizing collective, who have been inspired by the horizontal democracy techniques they are learning at OWS. Colby Hopkins, an unemployed 32-year-old community worker attended several of the facilitation trainings downtown and helped bring those to the group. “The principles of horizontal democracy are so fundamental to the movement,” he said. “It’s important to spread the concepts and processes and let people figure out how best to use them and adapt them.” The group is very committed to the idea that they are not applying a model from downtown, but rather they are sharing ideas and finding the strategies and issues that will resonate with people in their community.

The West Harlem group held its first general assembly on November 3, attended by about sixty people. The assembly formed working groups around education, economic justice, police, and housing issues, and those groups now plan to meet on a regular basis.

West Harlem has caught the OWS fever. On November 7, I walk across Broadway to visit Queen Mother Dr. Delois Blakely who is occupying her community-managed housing cooperative in defiance of the predatory lenders who want to foreclose on it. As I approach 142nd St, I am stopped by a vibrant march of hundreds of people coming along the footpath. It is the “End to End for 99% march” that had begun in Washington Heights and is continuing on all the way to Zuccotti Park in solidarity with OWS.

The Queen Mother’s house is in the Sugar Hill neighborhood of West Harlem. The number of the house has become the identifying name of the movement that has developed around it: Occupy 477-Sugar Hill.

I enter into her first floor apartment, and am greeted by her several supporters, including OWS activist Tony Cochran. The Queen Mother is waiting inside, dressed in a purple head wrap and brightly colored gown with thick socks and sweaters layered over the top.
It’s cold in there. In August, the lender closed off access to the boiler room so that the residents cannot fix the broken heat. As winter months approach, the lack of heat and hot water is an issue for the senior residents. One activist was arrested when he helped the Queen Mother enter the boiler room to investigate the problem. As I speak with the Queen Mother, one supporter enters with a box full of space heaters that have been donated to Occupy-477.

A former Roman Catholic nun, the Queen Mother explains that she came to Sugar Hill in 1978 with her handicapped daughter, and she came across the building, which was then abandoned. At the time, the toilet wasn’t working and there were homeless people staying there on mattresses. She worked with City College engineering students to rehabilitate the place and she went to trainings to learn how to self-manage a building. She discovered that under Housing Preservation and Development (HPD) guidelines, the apartments could be purchased from the city for $250. “When I put out a flyer to say that you could own your own apartment for $250, everybody thought that I had lost my mind,” the Queen Mother told me. The majority of people who answered her call were young women with children, and these women then became part of her unique experiment in community-managed cooperative housing.

Although the group of women closed on the property and officially purchased their apartments in 1982, the banks started trying to foreclose on the property back in 1991, citing unpaid loans taken out for the building by people who were not even residents but had claimed to act on the building’s behalf. The women — now senior citizens who are themselves grandmothers — have been fighting to maintain their housing through the help of non-profit organizations and pro bono attorneys. In the most recent turn of events, as lenders have tried to sabotage the building heat, the Queen Mother reached out to OWS activists. On day two of the occupation, she joined the movement in Zuccotti Park. She marched in the November 5 “Move your Money” Day against banks, reminding the gathered crowd that they stood on an African burial ground, as the first commodities traded on Wall street were her African ancestors and banks should pay reparations.

Through Occupy-477, the Queen Mother is hoping to highlight the housing problems faced by low-income residents in the neighborhood. “You do things out of a need, not because you’re an expert in building codes,” she told me. “I’m not an expert, I’m not a lawyer, but I’ve got to save this building.” The Queen Mother poses for a photographer with her handmade sign, “We are the 99%, united by 1, divided by 0.”

That same evening of November 7, the Movement for Justice in El Barrio — a northeastern neighborhood of Harlem — held an evening of dialogue with OWS. Building alliances between OWS and organizations such as this with its strong membership of Mexican immigrants is crucial, particularly given the low presence in OWS of immigrants who had mobilized in large numbers in recent years. Speakers at the event focused on the commonalities between their organization and OWS, most notably the fight against the 1%, which they referred to as “capitalism.”

The Movement has close ties to the Zapatista liberation movement in southern Mexico, and works with the tools of horizontal democracy key to both movements. The centrality of direct democracy techniques in the everyday work of the Movement for Justice in El Barrio should caution us against thinking that democratic methods are simply being brought from downtown to uptown. Rather, it reminds us that horizontal democracy as being practiced in OWS is influenced by the techniques forged in Zapatista village assemblies and neighborhood meetings in places like Argentina.

These activities are being mirrored across other parts of Harlem. Central Harlem held a large General Assembly a few weeks ago. On October 21, thirty-three demonstrators — including author Cornel West and OWS activists — were arrested during a civil disobedience act outside Harlem’s 28th precinct to protest the Stop & Frisk policies of the NYPD, which disproportionately target young black and Latino men. Local students are holding meetings on their campuses. The Coalition of Black Trade Unions (CBTU) and the NAACP held a rally in Harlem in support of OWS. And many other groups are organizing community speak outs, rallies and marches.

Yet even if all of these local activists and residents identify with the message of OWS, the 99% is a heterogeneous construct. Factors of race, ethnicity, age, and privilege constitute real obstacles to collaboration, a problem compounded by the tendency of groups to work within enclaves. What might be the practical articulation between these movements? How to overcome differences in a productive and democratic way? How to reach out to the broader population of the neighborhood who may not have the time or energy to become involved? It may take time and practical democratic working through of the issues, but if there is a slogan that can bring people together, the slogan of the 99% seems to have extraordinary imaginative power to do so.

On the day of the Halloween solidarity event, across the street from our table was a group of Dominican men, engaged in their usual Sunday afternoon street corner discussion. One man was sharing a letter from his building union with the others. “They’re telling me my pension is at risk,” he told the gathered group. “I’ve been working the same job for fourteen years, paying into my pension fund for fourteen years, and they tell me that it’s at risk because the financial markets are in collapse. It’s signed ‘Sally Lowe.’ I’m gonna call up Sally Lowe and ask her how much money she makes. Is her pension at risk because of financial markets? No! I bet that Sally Lowe gave herself a raise and a bonus. It’s robbery. The 1% is robbing us 99% blind.”

This article was originally published by the Huffington Post.