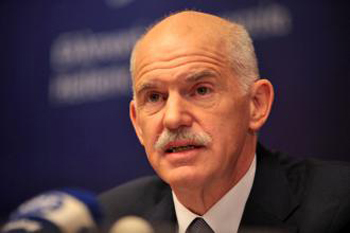 The Greek government led by the center-left PASOK party teetered on the verge of collapse after a week in which its creditors turned the screws to force it to swallow another dose of austerity poison. As this article was being written, political observers were predicting that Prime Minister George Papandreou would resign to make way for a government of “national salvation.”

Current Finance Minister Evangelos Venizelos, a member of Papandreou’s governing social democratic party PASOK, was expected to take over as prime minister. His new coalition government, including members of small right-wing parties, would act as a caretaker until new national elections, which could happen at any time.

On November 4, Papandreou barely survived a “no confidence” vote in parliament, as all members of PASOK and a few independent lawmakers voted for him. But the confidence vote for Papandreou was more of a face-saving measure than an endorsement of his leadership. It’s likely that Papandreou promised to resign in order to win the vote in parliament.

If Papandreou believed his maneuver would force the main opposition party, the right-wing New Democracy, into his “national salvation” government, he was mistaken. “We’ve not asked for any place in his government,” New Democracy leader Antonis Samaras. “All we want is for Mr. Papandreou to resign because he has become dangerous for the country. We insist on immediate elections.”

So the seeming plan of Venizelos’ possible caretaker government to spend up to four months in power may fail if New Democracy’s push for new elections brings down the government even sooner.

The government crisis came to a head after a week in which Papandreou had rattled Greece’s creditors and the country’s political elite with a call for a national referendum on the European bailout package announced October 16.

The October 16 plan, the latest in a series of packages to “rescue” the Greek economy, called for the EU to loan Greece up to $140 billion and request that Greek bondholders voluntarily accept to write off half of Greece’s debts. In exchange, the Greek government was to push through more savage cuts in pensions and wages, laying off thousands of government workers and privatizing more public services.

After two years of forcing austerity down the Greek people’s throats, the prime minister was actually threatening to ask them if they wanted to accept the October deal. But Papandreou’s call for a referendum had less to do with a newfound commitment to direct democracy than it did with a desperate ploy to buy time.

The socialist economist Costas Lapavitsas, writing in The Guardian, noted that Papandreou is “aware of the advancing collapse of his government. But he is reluctant to hold fresh elections because he knows his party would be destroyed. And so he has opted for the desperate gamble of the referendum in the hope of buying time, as well as scaring people with the ‘euro or drachma’ question.”

Lapavitsas wrote that there was no guarantee that Greeks–knowing that rejecting austerity might lead to Greece’s banishment from the eurozone–would vote “no” on the referendum.

But this possible outcome was one the eurozone elites in Greece, Germany, France and elsewhere could not abide. Papandreou’s announcement unleashed a furious backlash, with German Chancellor Angela Merkel and French President Nicolas Sarkozy bluntly threatening to cut off a scheduled loan of 8 billion euros ($11 billion) if Greece went ahead with the referendum.

Immediately, “the market” rendered its verdict: It had no interest in allowing Greek voters a chance at approving the austerity measures. The Dow Jones Industrial average cratered by 573 points the day after Papandreou announced the referendum–only days after the European bailout plan had sent world stock markets to their best October in decades.

Papandreou’s maneuver flushed out Samaras, who, after posturing as a populist opponent of the austerity measures, reportedly agreed to support them. The prospect of Greeks actually voting to leave the Eurozone was too much for Samaras’ big business backers to accept, even if they had been willing to tolerate Samaras’ earlier posturing.

The referendum proposal led to a split in the cabinet, with Venizelos and other ministers threatening to resign if Papandreou did not withdraw the proposal.

In the end, Papandreou bowed to the pressure and withdrew the referendum. He then claimed, in a speech posted on the government’s website, that he had never intended to go through with it. It was only a maneuver to blackmail the opposition to support the bailout, he said.

Whatever the “real” reason for Papandreou’s proposal, the resulting chaos ended up putting Venizelos, who has led negotiations for the Greek government with the “troika” of the International Monetary Fund, the European Union and the European Community Bank, back in the hot seat.

His government will live on borrowed time before new elections most likely deliver a smashing defeat to PASOK and the return of the right-wing New Democracy to power–only two years after the right was driven out in landslide. New elections may also deliver as much as 20-30 percent of the vote to parties on PASOK’s left.

In the two years since PASOK assumed power, it has proceeded–at the behest of the troika–to implement harsh austerity measures that have attacked its “base” among workers, unions and the poor. An October 2011 poll by Greece’s Skai TV and the newspaper Kathimerini showed that 92 percent of those surveyed were “disappointed” in PASOK’s performance.

This fall, that “disappointment” turned to revolt, as students, trade unions and public-sector workers broke from the government to launch huge strikes, rallies and protests against austerity. While the protests have yet to stop the government’s austerity drive, they have undermined the authority of the entire Greek political class.

The summer’s “movement of the squares” denounced the sham of a parliamentary system where politicians supposedly accountable to the people instead carry out the wishes of the banks, big business and international finance.

In September and October, workers took action into their own hands. Power workers announced that they would refuse to carry out the government’s orders to shut off electricity to ordinary people who couldn’t pay their electrical bills due to the cuts. Government workers occupied ministry offices.

And on October 28, protesters across the country disrupted military parades commemorating Greece’s opposition to Italian fascist dictator Mussolini’s invasion in 1940. It was an unprecedented action during what was normally treated as a patriotic and national holiday. Protesters denounced the politicians as traitors, and the Greek president was forced to retreat from the parade-reviewing stand in Salonika.

The politicians hope their parliamentary maneuvers will help them to regain initiative, and to allow Greece to retain its position in the Eurozone. But they may simply be setting the fuse for a far wider popular revolt in the future.