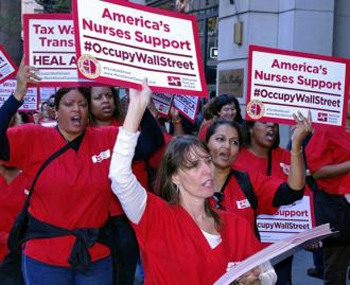 If you want to understand why the November 17 “Out of the Park and Into the Streets” demonstration called by Occupy Wall Street and major unions is going to be big–really big–start with the small table in the thicket of tents that crowd Zuccotti Park in Lower Manhattan.

Visible only because it is attached to a flagpole of sorts with several construction workers’ safety helmets hanging like banners, the table is intended to attract building trades workers who have been regularly visiting the encampment for weeks.

On a sunny Sunday afternoon last weekend, the park was jammed as activists savored a warm-weather break between a freak fall snowstorm and the coming winter chill. A construction worker in his late 50s stood, arms folded, next to the table, where a sign-in sheet for union members lay alongside a copy of the Hindu scripture Bhagavad Gita, a book now popular among New Age practitioners.

A bearded young man in his 20s stopped by for a chat amid a swirl of teach-ins, tourists stopping by, and protesters lining up at the mess tent for a late lunch. Thus, one journalist could sum up Occupy as “hard hats and hippies–together at last.”

It’s this kind of personal interaction–multiplied by tens of thousands across the U.S.–that explains organized labor’s deepening connection to the Occupy movement, including mass demonstrations and labor solidarity actions, both in New York City and across the U.S. Most important of all was labor support for protest marches tied to the November 2 general strike call in Oakland, Calif.

Next comes November 17. In New York, the day of action has been endorsed by major unions such as Service Employees International Union (SEIU) Local 32BJ, the 1199SEIU health care union, Transport Workers Union (TWU) Local 100, the United Federation of Teachers, the Communications Workers of America, the United Auto Workers (UAW) and a wide range of community groups and issue-based campaigns.

The mobilization of the unions in support of the Occupy movement–and their role in physically defending Occupy encampments when threatened by police–wasn’t simply the result of a decision by top AFL-CIO officials or even local union leaders closer to the action. It was a recognition that rank-and-file union members–like working people everywhere–were already responding enthusiastically to the core Occupy message of opposing the greed and power of the 1 percent.

“The truth of the matter is that our members went down on their own,” SEIU Local 32BJ President Mike Fishman said in a radio interview hours before the October 5 march in Lower Manhattan that turned out the first big labor contingents in support of Occupy Wall Street. He continued:

We have 10,000 members who work [as janitors] right in that neighborhood, in every building down there. And our members came to us, and came to the officers, and said, “We need to be supporting these folks, because they’re talking about what we’re talking about.” It’s much more organic than someone talking to someone and saying, “Let’s get our organizations together.”

A political alliance has thus been established between organized labor and Occupy, with an informal but widely accepted platform: stop the budget cuts, tax the rich, create jobs, end corporate domination of the political system and, at least among liberal unions, end the wars.

On the ground, Occupy labor committees in many cities have created new networks linking the activist and radical left to unions, in many cases for the first time since the Cold War anticommunist witch hunts of the 1950s uprooted the socialist current from the labor movement.

Back then, amid a long economic boom, union leaders could preside over contracts that delivered a steady increase in workers’ living standards. Today, by contrast, they’re facing a relentless attack by employers in both the private and public sector, who are determined to slash wages and benefits in an economy that will be stagnant at best, even if a new recession is avoided.

So whether they’re being savvy or simply looking to survive, many labor leaders have correctly seen Occupy as a key to a revival of the union movement.

Among the most vocal union officials in support of the movement is United Steelworkers President Leo Gerard, who hailed the movement as a sign of hope in “a nation gripped by massive unemployment, a nation in which destructive income inequality has risen beyond robber-baron levels, a nation where greed has been perverted from sin to good, a nation where politicians genuflect to money-changers, not majority citizens.”

Gerard also spoke more recently on MSNBC in support of the November 17 protests: “You’re damn right Wall Street occupiers speak for us. They do in Pittsburgh, they do in Chicago, they do in Oakland, they do in San Francisco, they do all across the country. And I think what we need is, we need more militancy.”

The question hanging over both the labor movement and the Occupy movement now is whether the militancy will move from the street to the workplace.

The call for a general strike in Oakland was a big step in that direction, even if unions were unable or unwilling to organize officially sanctioned work actions on a week’s notice. By supporting November 2 as a day of action, the unions turned out thousands of members for a daylong series of marches and actions that culminated in a community picket line that shut down the evening shift at the Port of Oakland, the fifth-busiest in the U.S.

While it wasn’t an all-out general strike, Oakland conducted a “dry run” for such a shutdown, said Clarence Thomas, a veteran member of International Longshore and Warehouse Union (ILWU) Local 10 and leader in the Million Worker March movement. The action was called in response to the near lethal police shooting of Scott Olsen, an Iraq war veteran who was the police attack on Occupy Oakland’s encampment when he was struck in the head by a tear gas canister.

By recalling the legacy of the last time workers shut down a city–in Oakland in 1946–as well as the 1934 San Francisco general strike that founded the ILWU, the Oakland action pointed the way forward for both the labor and Occupy movements.

Meanwhile, in an era in which Corporate America and its political operatives are set to make life dramatically worse for working people, there’s no way for labor to even hold the line without, as Gerard says, more militancy.

The challenge is making that militant action happen.

Already in New York City, the Occupy movement has helped a small group of locked-out Teamsters take on an employer–Sotheby’s auction house, the very name of which is synonymous with the top 1 percent. Occupy Wall Street activists–some union members, some not–have helped the workers disrupt high-profile art auctions.

Verizon workers, still fighting for a contract after a two-week strike in August, marched to company headquarters from Zuccotti Park to build support. Labor protests linking local struggles to Occupy have taken place in Portland, Seattle, Chicago and several other cities. And in Ohio, union members, doubtless energized by the Occupy movement, stepped up their efforts in the final days of a referendum that overturned a Wisconsin-style law which would have stripped public-sector workers of the right to bargain collectively.

At the same time, it’s important to recognize that many union leaders–such as UAW President Bob King–offer enthusiastic support for Occupy Wall Street while pushing through union contracts that lock in the devastating concessions made by autoworkers in recent years.

And while union leaders complain about being betrayed by Democrats, the entire labor leadership will push hard to elect Democrats in next year’s elections–and will often counterpose work around elections to other kinds of activity, such as contract campaigns or organizing the unorganized.

But despite the hesitancy of most union officials to match their rhetoric with action, there are unmistakable signs of a new fighting mood among the rank and file in many unions. Southern Illinois University faculty went on strike November 3 in a battle over the “corporate education” model, among other issues.

On November 17, the 23,000-member California Faculty Association, representing professors, lecturers and other staff in the California State University system, is set to strike. On informational picket lines on November 8, union members carried signs that read, “CSU faculty are and teach the 99 percent.”

Whether or not these big battles take shape, the movement has already created the solidarity networks that can provide crucial support for all kinds of workers’ struggles–from the occupation of a meeting of a school board or government agency pushing through cuts to sustained strike support.

That’s why its so important to make the November 17 protest as big as possible and forge alliances between rank-and-file workers within and between the unions in every city and town and on every college campus. The more the movement links protest with workers action, the greater its social power.