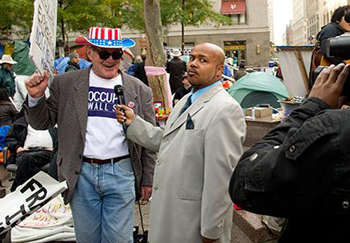 A few weeks ago, as the Occupy Wall Street protests were first spreading, something amazing happened: For 10 whole seconds, the local reporter on my TV screen actually talked about the realities of the recession. He even uttered the phrase “economic inequality.”

My guess is that you’ve seen something similar on your local affiliate—and that’s no minor event. When even the most local of television journalists are compelled to acknowledge this crushing emergency in a country whose media aggressively promotes American Dream agitprop, it means the Occupy protestors have scored a monumental victory. You can almost imagine a Wall Street CEO turning to an aide and muttering a slightly altered riff off LBJ: “If we’ve lost Ron Burgundy, we’ve lost Middle America.”

In response to this stunning turn of events, conservative politicians are retreating to non sequiturs. They seem to think that if they shout the phrase “class warfare” enough, the nation will go back to not caring about the divide between the rich and poor.

But something has changed.

For most of the post-World War II era, we tolerated relatively high inequality because we envisioned it as a necessary side effect of an exceptional economy that (supposedly) guaranteed opportunities for advancement. As The Wall Street Journal put it, we believed that “it is OK to have ever-greater differences between rich and poor … as long as (our) children have a good chance of grasping the brass ring.”

However, the last three decades have invalidated our standing hypothesis. After the conservatives’ successful assault on the New Deal, America has lived a different reality—one perfectly summarized by a new Federal Reserve study revealing that today’s increasing inequality accompanies comparatively low social mobility.

“U.S. family income mobility has decreased over the 1969-2006 time span, and especially since the 1980s,” notes the Fed paper, adding that “a family’s position at (the) end of (the) 2000s was … more correlated with its start position than was the case 20 years earlier.”

Of course, some class mobility still exists. The trouble is that it’s primarily of the downward kind. As the Pew Charitable Trusts reports, roughly a third of those who grew up in the middle class have now fallen below that station in adulthood.

This is why, for all the right-wing mythology about “Eurosocialism” snuffing out upward mobility, data from the Organization for Economic Cooperation and Development show that social mobility in uber-capitalist America is actually lower than in most industrialized countries.

This is why almost three-quarters of respondents just told The Hill newspaper’s pollsters that income inequality is a problem.

This is why my local TV news is suddenly airing pieces on economic inequality between sports, weather and all the “you stay classy” small talk.

And this is why, among all the fights over economic policy, the debate about taxes is the most crucial of all.

As the Fed noted in a separate report, the federal tax code—which remains vaguely progressive—has been the one proven way to “mitigate income inequality.” But with congressional Republicans gradually flattening federal income tax rates and with already-regressive state tax rates in GOP bastions like Texas, Wyoming, Tennessee, South Dakota and Mississippi, the tax system has lately been preserving or exacerbating existing inequality.

The good news is that if we return to the slightly higher tax rates of the Reagan or Clinton eras—i.e., the rates that existed when the economy was doing better—we can begin fixing things. If, though, we keep tax rates the same or make them even more regressive, we’ll be seeing a whole lot more about economic inequality on our local news as the current crisis inevitably reaches an ugly boiling point.