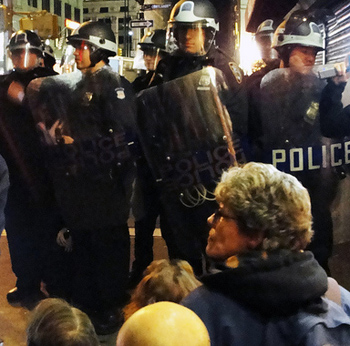 At 1 a.m. the New York Police Department (NYPD) began clearing Liberty Plaza of the hundreds of occupiers who camp there every night. People were told to leave with their property or face arrest. About 100 or so refused to move. Some of them chained themselves to trees, others linked arms.While this was going on, the General Assembly (GA) met at Foley Square a few blocks away and voted to move the occupation there. In practice, this meant that the diehard occupiers were left to be arrested by those who moved out after the NYPD’s warning. A few hundred New Yorkers mobilized via an emergency text message system when word of the impending eviction got out, but they were blocked from reaching the site by police barricades erected blocks away.

At 6:30 a.m. a New York State Supreme Court judge issued an injunction barring evictions without cause as well as the enforcement of park rules created after the occupation began. The law-breakers in Liberty Plaza are the NYPD who are unlawfully occupying a privately owned public space in defiance of a court order. Protestors with the text of the judge’s order in their hands approached the barricades sealing the park have been turned away repeatedly. The few people who have jumped the fences have been ejected.

By noon, the park’s barricades were surrounded by hundreds of protesters. It was an eerie sight and a strange role reversal. The cops were occupying the park, surrounded on all sides by occupiers. The number of people surrounding the park is growing, spilling over onto nearby streets as anticipation grows for a final court ruling on the legal status of the occupation.

The NYPD’s illegal eviction and occupation have cruelly exposed Occupy Wall Street’s (OWS) shortcomings. The police divided the occupiers by giving them a warning before moving in, allowing people to choose whether to stay and be arrested or leave with their freedom. The working groups are in disarray because they did not have contingency plans in place for this eventuality. The media team lost all of its expensive equipment in the raid, over 5,000 books in the People’s Library ended up in sanitation department trash bins, and as of this writing it was unclear what happened to the numerous pet dogs that were in the park with the occupiers.

After Bloomberg’s previous eviction attempt failed, the occupiers felt invincible. They began erecting tents, one by one, until the entire park was populated with them, confident that Bloomberg would not try again. A few days ago, when a cop belligerently marched into the park, Malik Rhasaan of Occupy the Hood noted occupiers had become “too comfortable” because the officer was not followed by a single camera or occupier’s eyeball. Rhasaan called out to alert people to the intrusion but no one paid attention.

Just as “too big to fail” banks foreclose on people without proper documentation, Bloomberg evicted the occupiers illegally. Unlike the banks, he will not succeed. His paper work is not in order. We are not isolated individuals or families up against impersonal, multi-billion dollar corporations. Liberty Plaza will not remain closed forever.

The whole world is watching. Over 10,000 people are on OWS’s livestream, the highest number ever.

Every time the NYPD comes down on the movement, the movement grows. After Anthony Bologna pepper sprayed young women near Union Square on September 24, we grew. After 700 activists were lured and trapped on the Brooklyn Bridge on October 1, almost 30,000 marched on October 5. When Iraq veteran Scott Olson was severely injured after Oakland police shot him in the face with a tear gas canister on October 25, we replied with a November 2 general strike.

The post-repression growth is not only numerical but also qualitative. A month ago, no one would have thought any occupy could pull off a general strike.

An uprising that grows larger and matures politically with each attack by the 1% is their worst nightmare. When armed Mubarak supporters attacked peaceful demonstrators in Tahrir Square on February 2, the revolution lost its innocence; the crowds became angrier and their determination to drive the dictator out became steeled. When Qaddafi killed demonstrators in Benghazi on February 20, the revolution militarized, went underground into neighborhood cells, and infected even agents of his secret police.

This same revolutionary dynamic is at work in the occupy movement, although it has a long way to go before it reaches the proportions, maturity, and intensity to truly threaten the dictatorship of the 1%. Fortunately for us, time only moves in one direction.

Editor’s note: The People’s Library has not been thrown out and is in storage as of press time.

Pham Binh’s articles have been published by Asia Times Online, Znet,
Counterpunch, and The Indypendent. All of his writings on Occupy Wall Street and
other topics can be found at www.planetanarchy.net