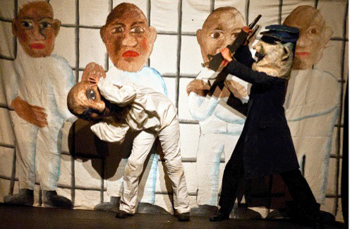 Attica and Man of Flesh and Cardboard
Performed by Bread and Puppet
Theater for the New City, 155 Fifth Avenue
Show runs through Dec. 18

Watching the engorged head of the “Governor” in Bread and Puppet’s current revival of Attica it is easy to imagine Attorney General Eric Holder in the same role. “This is a good country,” grumbles the large puppet, meanwhile giving orders to shoot the prisoners who have dared to “fight the gun with a ‘spoon.’” Holder (and the Obama administration) may not be issuing orders to shoot prisoners as Governor Rockefeller did in 1971, but they have consistently upheld conditions of detention worthy of many uprisings.

Bread and Puppet understands the relevance of this older performance, originally performed in the wake of the Attica Prison uprising, which is precisely why they are re-staging it this month at Theater for the New City. The story is paired with Man of Flesh and Cardboard, a tale of Bradley Manning, the soldier who leaked classified military information to Wiki-leaks in hopes of revealing the brutality of the U.S. occupation of Iraq. Or as he is described by Bread and Puppet’s Peter Shumann, “the courageous soldier who is charged with war crimes because he revealed war crimes.” Told as an absurd dance of sorts featuring cardboard skeletons of fallen soldiers and the inane chattering of an embedded media, the story is presented as that of a soldier’s growing consciousness.

Through a series of scenes that touch on the corruption and repression explicit in the U.S. military enterprise in Iraq we watch as Manning becomes, or rather realizes that he is a “two legged human with other agendas besides soldiering.” The penalty for acting on this realization of his own humanity is to face conditions that have aptly been described by human rights groups as torture, namely, prolonged solitary confinement. The dehumanizing conditions Manning was initially held in, powerfully staged by Bread and Puppet and a large cast of local volunteers, are similar to those endured by Fahad Hashmi and others who find themselves on the wrong side of the U.S. war on (of) terror. “For further security blah blah blah you are denied…,” declares the “Emphasizer” in Man of Flesh and Cardboard, so accurately parodying the rationale often given for this most recent round of the U.S. government’s attack on civil liberties.

Bringing Manning’s story to the stage and connecting it with the story of Attica asks us as an audience to think about detention more broadly. The righteousness with which the jailer confines and abuses the jailed is revealed as grotesque in both stories, epitomized by the guard in Revenge of the Law who lectures the prisoner he is beating: “You are cold because you are bad, you are hungry because you are bad…,” and so on. This kind of self-justifying, circular logic has been in full swing in post 9-11 prosecution of terror suspects. In case after case, the use of extreme conditions of detention, be it pre-trail or post sentencing, at Guantanamo or in the federal system, are used not as punishment for crimes committed, but rather as a justification for accusations leveled — i.e. you are dangerous precisely because you are being held in solitary confinement (blah blah blah…).

In what has always been standard fare for Bread and Puppet, who first began creating politically-charged-giant-puppet-laden performances in the Lower East Side in 1963, Man of Flesh and Cardboard is an attempt at “serving up a white bean of truth in the daily grey stew of untruths.” (This is also how the show describes the actions of Bradley Manning.) Bread and Puppet’s work has long been “self-supported” and unlike upcoming programming at the Brooklyn Academy of Music, Attica and Man of Flesh and Cardboard are not sponsored by Chase Bank. No doubt, its “white bean of truth” is better for it.

You can catch the show Wednesday-Sunday at 8 p.m. through Dec. 18 at Theater for the New City. There is also a kid-friendly show, Man = Carrot Circus, which performs Saturday and Sunday at 3 p.m. Tickets are available at 212-254-1109 or online at theaterforthenewcity.net. Or just show up the old-fashioned way. Listen for the band that plays outside the theater before each performance.