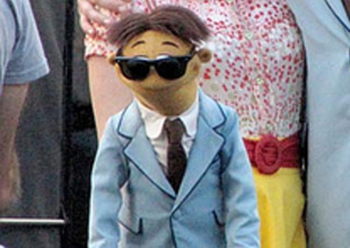 The Muppets will save thousands of gay children. In American cinema, one of the rarest narratives is a joyful coming out story, and on the surface, The Muppets seems a simple reboot of a faded franchise. But watch again and you’ll see Walter, the protagonist muppet, in the classic stages of gay liberation. At the film’s climax he claims full muppethood—and through him, young viewers trapped in the wrong body can feel free.

Historically, being gay is portrayed as tragic in American cinema. Whether in Philadelphia, Boys Don’t Cry or Milk, gays die by HIV or die by loneliness or die by hate. Very few live with joy, which makes claiming one’s sexuality a candidacy for martyrdom. Such films are designed to wring tears of sympathy from straight people, who are shocked by the brutality of bigotry.

But The Muppets is a surreal, playful and hopeful universe where every difference has a home. In the film, Walter and best friend Gary (played by big-jawed Jason Segel) share a room, share clothes and just share, share, share. They are in a “homosocial” relationship, defined by queer theorist Eve Sedgewick as a passionate bond between men—a bond closed from sexuality but can’t include the opposite sex. It gives the film a homoerotic subtext. Gary and Walter mirror each other so closely that no room is left for Gary’s girlfriend of ten years, Mary, who watches them play with furrowed brow.

But an inevitable split opens between them. One is a muppet, the other a man. When Gary grows, his mom notches the wall—but Walter never grows. He is alienated, lost amid humans. Identity crisis is the conflict that drives Walter, who undergoes the same stages of homosexual coming out mapped in 1979 by Vivian C. Cass in her paper “Homosexual Identity Formation.”

First is identity confusion; Walter stumbles around with Gary without comprehending how or why he is different, but determined to try and fit in. Second and third are identity comparison and tolerance. Walter sees the “Muppet Show” on TV and instantly feels a bond with them. In one visual gag, he runs into the glass screen trying to leap into the “Muppet Show” to join them. He accepts that he is a muppet and surrounds himself with their memorabilia as if to cocoon himself in their world.

Next are identity acceptance and pride. Walter goes to LA with Gary to go on the Muppet tour and, hopefully, meet them. After hearing evil oil-tycoon Tex Richman, played with ooze by Chris Cooper, brag about tearing down their theater to drill, Walter meets Kermit and the duo plans to save it. On the feisty road trip, Walter is taken in by Gonzo and Miss Piggy, Fozzie the Bear and Animal.

But the homosocial bond between him and Gary stunts them. Neither can grow as individuals until they let go of each other. Gary has not committed himself to his girlfriend of ten years. He is too dedicated to Walter—who is himself becoming more muppet. It is only after a lonely Mary dashes back home that Gary is forced to make a decision. Is he loyal to Mary or the Muppets? And Walter must answer who he belongs with. They answer the question with the showstopper song, “Man or Muppet,” in which they each wrestle with their identity.

Watching this, I was stunned. Who thought that American children would be exposed to W.E.B. Du Bois’s concept of Double-Consciousness, in which one is “always looking at one’s self through the eyes of others, of measuring one’s soul by the tape of a world that looks on in amused contempt and pity.”

The film is a culmination of Generation X nostalgia. Having seen “The Muppet Show” as children, Gen X’ers carried them into adolescence and adulthood. Each step brought adult confusion and fear and sexuality to the muppets. Years ago in a Calvin Klein ad, we saw Kermit smirking coyly in underwear. On the internet are images of him vomiting into a toilet after binge drinking or doing heroin or having sex or standing gangsta style with a machine gun.

In the acclaimed Broadway show Avenue Q, muppets re-enact the disillusionment of adult life, the terror of failure, questioned sexuality and enduring social discrimination. The latest adult use of childhood nostalgia was the Occupy Sesame Street video on YouTube. Characters from the show are fused with scenes from Occupy Wall Street. Elmo is kneed down by cops. Bert walked away in handcuffs. The Count is crying from pepper-spray.

Hilarious as those scenes are, they rely on a deep pessimism. The Muppets reverses that dynamic of destroying innocence. The film’s message is that difference is neither a mark of shame nor a thing to be feared. It can be a source of power. When they run out of acts during the fundraiser, Walter takes the stage and whistles an operatic symphony. The audience throws roses at him—because the stage is as far from the closet as anyone can be.

This article was first published by Alternet.