Civil liberties groups and many citizen activists are outraged over language in the National Defense Authorization Act of 2011 (NDAA) that appears to lay the legal groundwork for indefinite detention of U.S. citizens without trial.

David Gespass, president of the National Lawyers Guild, called it an "enormous attack on the U.S. and our heritage" and a "significant step" towards fascism, in an interview with IPS.

"For a very long time the U.S. has been moving towards what I personally think of as fascist – the integration of monopoly capital with state power, that's combined with an increased repression at home and greater aggression around the world. I don't think we're there yet, but I do see that we're going in that direction," Gespass said. "I think the… act is a significant step in that direction."

"It's quite severe. If this continues, people will not be able to count on constitutional protections at all," Debra Sweet, national director of the group World Can't Wait, told IPS.

When those detentions were challenged in the courts, the federal government argued that the Authorization for Use of Military Force (AUMF), passed by the U.S. Congress on Sep. 18, 2001, allowed for the detentions to occur. In 2004, the Supreme Court agreed in Hamdi v. Rumsfeld.

"I know a lot of people who voted in favour of it (AUMF) back then didn't think they voted in favour of what ended up happening, but what it said is the president is authorized (to do) whatever is necessary," Gespass said. "The language as I recall it is not at all restrictive."

The current language in the NDAA seeks to legislatively affirm that the U.S. has the right to detain people, even though the courts already ruled, at least in the case of Hamdi, a prisoner captured during armed conflict in Afghanistan, that it already has that power.

Section 1021 defines who can be detained by the military.

The definition of "covered persons" under the provision includes not only those who planned, authorised, committed, or aided the terrorist attacks of Sep. 11, 2011, but also "a person who was a part of or substantially supported al-Qaeda, the Taliban, or associated forces that are engaged in hostilities against the United States or its coalition partners, including anyone who has committed a belligerent act or has directly supported such hostilities in aid of such enemy forces."

Critics say problems with this language include the vagueness of the terms "substantial support", "belligerent act", or "directly supported".

Moreover, because the act allows for individuals suspected of support or belligerence to be held indefinitely without trial – until the end of the "war on terror", which could be never – there could be no opportunities for these individuals to challenge the vagueness of the charges against them.

Section 1021(e) says the act does not alter any rights of U.S. citizens, meaning that the Bill of Rights of the Constitution remains intact. It might be up to the courts, however, to eventually determine whether the application of these NDAA provisions to a U.S. citizen would be constitutional.

However, if they are being detained indefinitely with no lawyer, then how does anyone know they are there, to appeal to the civilian courts on their behalf?

Another section says "the requirement to detain a person in military custody under this section does not extend to citizens of the United States". It does not say military custody is not an option; merely that it is not required.

The bill was presented to President Barack Obama on Dec. 21 and is currently awaiting his signature. 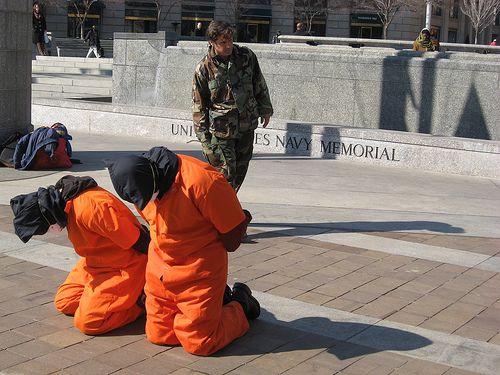 However, numerous members of Congress have raised concerns.

Prior to its passage, on Dec. 12, Representatives Hank Johnson, Martin Heinrich and 30 others sent a letter to the chairs and ranking members of the U.S. House and Senate's respective Armed Services Committees.

They expressed their opposition to "an expansive authorization for detention of and use of military force against broadly defined adversaries substantially exceeding the scope of such authorizations already in law."

"The expanded authority has no geographical limits, provides authority for open-ended armed conflict, and is unacceptably broad," they wrote.

"We are deeply concerned that this provision could undermine the Fourth, Fifth, Sixth, Seventh, and Eighth amendment rights of U.S. citizens who might be subjects of detention or prosecution by the military," they wrote.

On Dec. 15, Senator Dianne Feinstein introduced the Due Process Guarantee Act of 2011 (DPGA), with 15 co-sponsors.

This legislation states, "An authorization to use military force, a declaration of war, or any similar authority shall not authorize the detention without charge or trial of a citizen or lawful permanent resident of the United States apprehended in the United States, unless an Act of Congress expressly authorizes such detention."

A companion piece was introduced in the U.S. House on Dec. 16; it has 29 co-sponsors.

Meanwhile, in Montana, activists have begun an effort to recall their entire Congressional delegation for supporting the NDAA.

This article was originally published by IPS News.