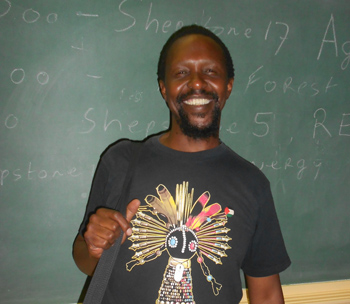 Trevor Ngwane is a long time South African activist and organizer. He currently serves as the national organizer of the Million Climate Jobs Campaign and is a Masters student at the University of KwaZulu Natal’s Centre for Civil Society. He was formerly a trade union organizer and led the Anti-Privatisation Forum and Soweto Electricity Crisis Committee. He is currently participating in events at the people’s space organized in Durban to mobilize civil society action for climate justice during COP 17.

Ngwane talked about how the campaign to find one million jobs in South Africa is an answer to the climate crisis that is currently unfolding around the world as well as the 25 percent unemployment rate in the country. He stressed the need to seize on ordinary people’s interest and lived experience to mobilize them for the struggle to achieve one million climate jobs. He puts the potential for a million climate jobs in the context of a hobbled neoliberal system and talks about what the movement to halt climate change can learn from South Africa’s liberation struggle.

Janis Rosheuvel: Why are you in Durban now during the 17th Conference (COP 17) of the Parties to the United Nations Framework Convention on Climate Change (UNFCCC)?

Trevor Ngwane: At the moment I am an organizer for the Million Climate Jobs Campaign. This is a campaign that started about three months ago. It was inspired by COP 17 coming here to South Africa. It’s an intervention, what I’d call a positive campaign, because instead of just moaning about climate change we are trying to come up with solutions. At the same time also we are trying to address the unemployed or the workers who are threatened by losing jobs because of the need to change production methods. Let’s say, a coal miner I’m sure is not happy now with everyone attacking coal, you know. In South Africa we can create a minimum of one million climate jobs to actually fight against climate change to reduce carbon emissions. So what we are here [in Durban] is to promote this campaign.

JR: What is a climate job and how is it different from other jobs? In particular how does it address the need for good quality jobs at just wages?

TN: The campaign is actually inspired by socialist thinkers, so we really want decent permanent jobs and we emphasize that they should be public sector driven. Because the public sector, the government, is less likely to kick people out [of work]. And also it is less motivated by profit. I am not saying that governments don’t dance to the music of profit, but at least we have got some kind of democratic controls over governments. So a climate job is a public sector driven job which aims to reduce carbon emissions and also help people adapt to the consequences of global warming and climate change.

JR: What industries would be impacted by generating one million climate jobs?

TN: In South Africa many people still don’t have electricity in their houses and even those who do have electricity their access is insecure due to commodification, people have to pay for electricity. So if you can’t pay they cut you off. Sometimes [the electricity company] installs pre-payment meters. So a climate job in that sector would involve a building/manufacturing solar panels using the power of the sun to actually generate electricity. At the moment in South Africa almost all our electricity is generated through burning coal. So we could create 100,000 jobs in six months if we just imported solar panels and installed them for people without electricity. We could also, install water geysers which are powered through solar energy. But our vision is that the whole house actually has clean energy. Of course going into the future we want to move away from coal powered energy all together. Also because South Africa is a sunny place we don’t have to import all our solar panels. We could also design solar panels which are more suitable to our conditions. We’ve got many young people sitting at home with a high school education we could train them in engineering design for that kind of technology: installing the solar panels, maintaining them, also educating them [about the reliability of solar energy]. You know, there is still this prejudice that solar power is not the best power, is not reliable. 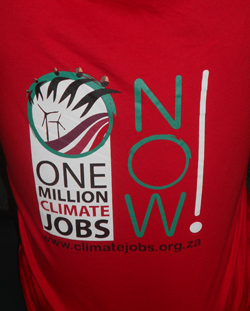 JR: What is climate adaptation and how does it fit in with the Million Climate Jobs Campaign?

TN: Climate change means, the climate is going to change maybe in ways ways which are unpredictable, which are extreme, which are abrupt. So instead of having the rainy season where the rain goes on for three months, you might have all that rain coming down in two weeks. Now if it comes down in two weeks you’re going to have flooding, floods. So you have to anticipate that. So you could have a national disaster program in case there is flooding. In South Africa we have a lot of shacks—shantytowns, people who live in houses built with corrugated iron, all sorts of materials. So we could build houses for those people which are strong and can withstand floods. That’s adaptation.

JR: In the Untied Stated, President Obama has talked a lot about this notion of green jobs, but there is limited political will to make green jobs or the kinds of adaptations you are talking about happen there. Do you think the political will exists in South Africa for a Million Climate Jobs to Come to fruition?

TN: I think we have a better chance because we only got our independence literally from colonialism in the last 20 years. In fact, Nelson Mandela was released from jail in 1990 and then we had a new government in 1994 so we are 17 years on, so there is still that hope, that energy, that momentum that we want a better life. Also neoliberal policy which is commodification [about]—everything must be up for sale—that way of thinking is losing its power in the world. Especially with the 2008 economic recession where the same people who were saying government must keeps its hands off the economy were busy using government money, tax money, to bail out banks, so now it it’s acceptable for government to intervene decisively in the economy, so we’ve got that going for us.

JR: What is the continental impact of climate change likely to be?

TN: South Africa is one of the most advanced economies in Africa: we’ve got industry, we got good roads, almost a first world sector. Africa will suffer the most from climate change, and from the consequences of global warming. What happens is, we’re got the Sahara dessert, already expanding through desertification. And people are starting to migrate, what you call climate refugees. As you know, in South Africa, you get many people from north of the border here coming down. There was crisis in Zimbabwe. We’ve got more than three million Zimbabweans in South Africa. We’ve got many Mozambicans. You can call them economic refugees. But you also get people from the [Democratic Republic of] the Congo who are actually war refugees. With climate change, it’s just going to make things worse. You are going to have problems with food security, as people have less coming from their fields so it’s imperative for us to come up with solutions to the climate crisis. I think our government, and our people in particular, will respond positively to this campaign.

JR: How are you mobilizing for the campaign? How is the movement being built?

TN: At the moment we are just using the fact that COP 17 is here. Everyone in South Africa is talking about climate change. There is this big meeting in Durban every a child, the taxi driver, the church man and woman, they want to know what’s going on? So we are using that. But some people feel overwhelmed. “If the climate changes there is nothing I can do, who am I?” Some would even say it’s God’s will, you know. Our campaign is trying to say, no, you can do something. You can take to the streets and march. You can campaign in your church, in your school to put pressure on the powers that be to actually create a million climate jobs. You can also do other things within your own community, for example, premaculture. Because there is going to be a crisis with food, so you can encourage people to plan gardens, or the government to release land so that we move away from agribusiness, you know big farms, owned by multinational corporations, they are high carbon emitters.

JR: So you are mobilizing the grassroots, what else are you doing?

TN: The second think we are doing is building alliances between community organizations. In South Africa we are lucky, we have a lot of community organizations, social movements, nongovernmental organizations involved in a variety of activities. We are trying to link up with the trade unions, with church movements, around climate change. We are using the COP 17 dynamic. But I think our campaign will really take off after COP 17, when we down to brass tacks, the nitty gritty, when we actually go to our government with clear proposals. We are also conducting research on generating energy from wind turbines and ocean wave technology. We are also thinking of public transport. So instead of people driving their cars, we can have low carbon buses and trains. Also housing, so that you build houses that don’t need a lot of artificial energy. These are all the things we are looking toward emphasizing as we move forward with our campaign.

JR: What do you think the movement for climate justice have to learn from South Africa’s liberation struggle?

TN: Well, in South Africa we were facing a formidable enemy. Apartheid was a fascist state with big guns. They were prepared to kill, they killed. They sent Nelson Mandela and many others to jail for many years. They were pushing people off 10 story buildings. It looked as if the people had no power. But through coming together, in particular through the international support we got from African Americans, workers in Germany, trade unions in the UK, from our brothers and sisters in the rest of Africa, we were able to build a formidable movement which was able to match and win against the apartheid monster. So, although climate change might seem such an overwhelming problem especially given the fact that the very system we live in—capitalism—is profit driven. It’s hard to convince a multinational corporation making money from oil to stop producing oil! But we can win through building solidarity, through raising awareness. The solution cannot come from the elites it can only come from the ground. And people must be made to feel they count, their action counts, what they say counts. That’s the inspiration we get from the apartheid movement. By coming together through solidarity we can win. You don’t have to fight alone. In fact, you can’t win alone. The only way is if we stand together.

JR: Do you have any special message for US readers?

TN: People in the U.S. firstly must think about Africa. Africa will suffer the most from the consequences of global warming and climate change. Secondly, the whole world is going to suffer. But when the suffering begins the people who suffer first are the poor, the working class. It’s important that we come up with ideas and a vision which puts the poor, the working class, the ordinary John or Mary in the street at the forefront of social change. That is our vision, people driven social change.