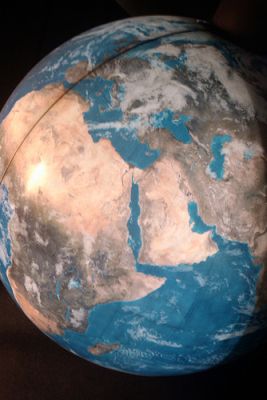 The economic localization movement is growing. Locavores have become widespread, with the “100 mile diet” representing the new eco-conscious food trend. Author Helena Norberg-Hodge begins her TEDx talk, The Economics of Happiness, with this impassioned plea: “For all of us around the world the highest priority, the most urgent issue, is fundamental change to the economy,” and goes on to say, “The change that we need to make is shifting away from globalizing to localizing economic activity.” This, she suggests, is the economics of happiness. Even in my own town, a yoga studio has a sign on the wall urging yoga practitioners to shop locally.

As a humane educator who teaches about the interconnected issues of human rights, environmental preservation and animal protection, I am uncomfortable with the fervor surrounding localization. While the farmer’s market and local food movements have certainly been beneficial – helping farmers, communities, and individuals alike – it’s not realistic, desirable, or responsible to reject global trade out of hand or to advocate localization as the urgent answer for our times.

A full commitment to local economies would mean that in Maine, where I live, people would need to give up coffee, citrus, rice, cotton and synthetic fabrics (among many other things) and rely on potatoes, wheat, lobsters and clams, canned food stored from our brief summers, and wear linen clothing and deer hides. It would also mean that medicines discovered and produced by scientists working in New England would no longer be exported to places where they are most needed. Perhaps they wouldn’t be discovered or produced at all, given that many ingredients and processes are derived across the globe.

Imagine what would happen to the Ethiopian coffee farmers depicted in the film Black Gold whose organic, fair trade coffee would no longer have a market outside their communities, or to the sustainable and fair trade collectives in Central and South America which are exporting goods, foods, and clothes to the north. These collectives are lifting countless individuals out of poverty. Many of them would simply go out of business if their products had to be sold only locally.

The choice between localization and globalization is a false one. Too often the phrase “local economy” is associated with small, just, sustainable, and humane, and “global economy” with big, impersonal, cruel, and destructive. Yet plenty of local companies are large, exploitative, and cruel (like Maine’s biggest chicken producer), and plenty of companies overseas are sustainable, humane, and just (like many fair trade businesses). We need to make more nuanced choices. If the primary agricultural problems, for example, lie in monoculture farms, poisonous chemicals, environmentally hazardous GMOs, “pharmed” animals, fuel-guzzling animal agriculture, exploitation of farm workers, cruelty to animals, and reduction in biological diversity of crops, we can address these problems directly. Fair trade, organic, sustainable, diverse, plant-based farming are meaningful alternatives that shift the economics of agriculture away from exploitation and abuse without closing markets between north and south, east and west, or in the U.S. between the fertile heartland, citrus-bearing Florida, and California (where just about everything grows). I’m happy that my state of Maine provides blueberries, potatoes, and lumber to people across the country (although I would like it to do so without toxic pesticides and clear-cutting), and I’m also happy that I can live in Maine and still drink green tea and eat cashews.

Globalization does require the use of fossil fuels to transport crops and products across the globe, but as Michael Berners-Lee reveals in his carbon footprint assessment of hundreds of products and foods in his book, How Bad Are Bananas?, local doesn’t necessarily mean less carbon intensive. Bananas from equatorial regions, he points out, use a small fraction of the fuel of hothouse tomatoes grown next door to him in England. And local beef has a bigger global warming impact than wheat transported across the country. Ironically, the energy it takes for local small farmers to drive their many pickups to a farmer’s market often significantly exceeds the carbon footprint of one semi bringing food produced from further away. Production and distribution of foods and goods to 7 billion people come replete with complex problems that are going to require innovative solutions in order to ensure they are humane, restorative, and just. And regardless of whether we rely on locally or globally produced foods and goods, we’re going to have to find and create clean energy sources.

It may well be that there are communities and nations that by luck of terrain and resources are self-sufficient and can forego economic globalization in favor of cultural integrity and local production, but for most rich and poor countries alike a wise mix of local and global trade is probably the best hope for healthy and thriving communities. It’s certainly a positive trend that we’re witnessing a revival of local, sustainably-produced foods and goods, and I feel good about the fact that I produce a large portion of my family’s food in our 900-square-foot organic garden, but localization is not a panacea. My hope is that in the process of coming up with solutions to our very complex global challenges, we will not fall into an either/or trap that prevents us from harnessing the creativity we really need to build a just, healthy, and humane world for all.