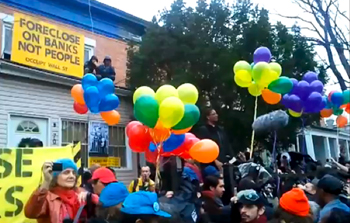 On Dec. 6, thousands of Occupy Wall Street supporters took to the streets once more. Instead of heading for their local square or park, this time protesters and their allies headed to neighborhoods hardest hit by foreclosures as part of a national day of action, “Occupy Our Homes.” An estimated 6 million homes have been foreclosed on since 2007, and another 8 million are likely to face foreclosure in the next four years, according to a recent Bank of America report.

Taking inspiration from property reclamation actions by groups like Take Back the Land, groups in New York City headed to East New York to liberate the house on 702 Vermont St., which had been unoccupied for the past three years. Joined by tenants, homeless rights and civic groups, more than 500 protesters descended on the property to reclaim, clean and renovate the home for Alfred Carrasquillo, Tasha Glasgow and their two children. The family has spent the last few years in and out of homeless shelters. At around 3:30 p.m. hundreds of supporters welcomed them to their home, hanging a yellow “Foreclose on Banks, Not People” banner and beginning the day-long project of making the house habitable.

New York activists were joined by actions in more than 20 cities throughout the country. Occupy Oakland occupied the foreclosed home of Gayla Newsome, mother of three. More than 100 supporters from a different “Occupy Our Homes” contingent in Oakland entered and reclaimed a Fannie Mae owned duplex on 10th St. near Mandela Parkway, promising to turn it into affordable community housing.

In Missouri, Debbie and Robert Henry of Southgate announced that they would not comply with any eviction or foreclosure efforts on their home. “If we lose our home, we don’t know what will happen,” said an emotional Debbie Henry in front of her home, surrounded by dozens of supporters who vowed to defend her family from eviction.

In Chicago, activists helped reclaim two homes. Sabrina Morey was joined by a group of 20 protesters in a march through the Westside neighborhood of Belmont-Cragin to a home that she has illegally occupied for the past month with her extended family of ten. “It’s either pay your rent or you eat, and I don’t know which one is more important because we need housing and we need food,” Morey told WBEZ. Activists with Occupy Chicago and the Chicago Anti-Eviction Campaign also coordinated the reclamation of an abandoned home for two homeless women and a one-year-old relative.

In Atlanta, the disruption of foreclosed home auctions at three courthouses around the city was also accompanied by the occupation of homes. Among the homes liberated were that of 44-year-old Iraq War veteran Brigitte Walker. In 2004, shock from mortar rounds crushed her spine, limiting her mobility and eventually leading to a medical retirement from the army that left her short on money when the mortgage payment came. The bank notified Walker they will take her home on Jan. 3, but Occupy Atlanta supporters vowed to protect the former soldier from eviction.

The reclamation of foreclosed homes represents a new stage for the Occupy movement, one that comes in the wake of violent police dispersal of protest camps nationwide. With 1 in 4 mortgages currently “underwater” and a new Government Accounting Office report showing an increase in vacant residential properties from 7 million in 2007 to 10 million in 2010, it seems more than likely that the movement will continue to find ample support and opportunities to “Occupy our Homes.”