The backers of the controversial Keystone XL tar sands oil pipeline, intended to carry tar sands crude oil from Canada to the Texas gulf coast, have attempted to sell the U.S. public on the notion that the project is actually a keystone to conservation. They have claimed the pipeline would not only conserve U.S. jobs but create 119,000 new ones. The company eager to build it, TransCanada, has stated the pipeline would save, or conserve, U.S. motorists money by lowering gas prices. They argue it would lead to greater energy security. Proponents have even asserted that Keystone XL would help us preserve our moral integrity. Because tar sands oil does not come from dictatorships, they say, it’s “ethical oil.”

Keystone XL would do none of these things.

TransCanada, Enbridge, and fossil fuel magnates like Charles and David Koch see Keystone XL as a keystone to conservation, all right – of their profits. In reality, it is a keystone to devastation.

In the only jobs study independent of Keystone proponents’ influence, Cornell University’s Global Labor Institute concluded that TransCanada’s job numbers are unsubstantiated and the project could actually kill more jobs than it creates. By slowing the transformation to a clean energy economy, Keystone XL would cost the U.S. thousands of well-paying jobs in the renewable energy industry – the fastest growing sector of the economy.

In its 2008 permit application, TransCanada stated that one of the reasons it wants to build Keystone is to raise gas prices in the Midwest, which the company claims are too low relative to other parts of the country. Yet TransCanada told investors that much of the oil would be shipped from Texas to Asia and Europe. Because they are located in foreign trade zones, many of the refineries on the Texas coast can sell Canadian oil to overseas markets without paying U.S. taxes.

Our energy security depends on dramatically decreasing use of the fossil fuels that are wrecking our climate – especially extreme fossil fuels like tar sands that result in much higher greenhouse gas emissions than conventional oil. A letter to House and Senate leaders last year signed by 33 retired U.S. generals and admirals stated, “Climate change is threatening America’s security. The Pentagon and security leaders of both parties consider climate disruption to be a ’threat multiplier‘ – it exacerbates existing problems by decreasing stability, increasing conflict, and incubating conditions that foster terrorist recruitment.”

A Morality of Devastation

As for preserving our moral integrity, this is pipeline backers’ most laughable claim. We Wisconsinites are no more ethical than the people of Canada; last year we allowed another tar sands pipeline, the Alberta Clipper, to bisect our state and threaten our precious ground and surface waters. But we are also the keepers of Aldo Leopold’s legacy. Leopold, the father of the Land Ethic, spent the latter part of his life in Wisconsin, and once wrote, “. . . regard for community welfare is the keystone to conservation.” Leopold defined “community” broadly; he was talking about the entire biosphere.

“A system of conservation based solely on economic self-interest,” he wrote, “tends to ignore and thus eventually to eliminate, many elements in the land community that lack commercial value, but that are . . . essential to its healthy functioning.”

Keystone XL would not only eliminate elements essential to the planet’s healthy functioning that lack commercial value, it would irreparably harm resources and ecological processes of immeasurable commercial value. It jeopardizes the Ogallala Aquifer, drinking water source to millions and irrigation tank for the nation’s breadbasket. Most importantly, if used as intended it would be a stake through the heart of the moderate climate on which human civilization utterly depends. As NASA’s chief climate scientist, James Hansen, has said, if the Canadian tar sands deposits are developed to their full potential, it’s essentially “game over” for the climate.

The choice could not be starker: Big Oil’s keystone, which supports the fossil fuel industry’s short-term profits and could actually bring about ecological collapse – or the keystone of conservation Leopold and others championed, sculpted from a regard for the welfare of the entire earthly cathedral and its inhabitants. Leopold’s keystone supports the entire structure, which holds the finite natural capital upon which all industry depends. Keystone XL threatens to bring it all crashing down on our heads. 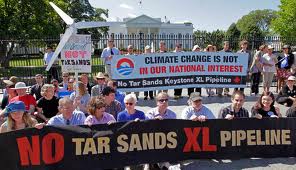 In November, President Obama wisely delayed a decision on the pipeline until 2013, saying all its impacts should be better understood before construction begins. Last week, a majority of U.S. Senators, many of whom took large sums of campaign cash from the fossil fuel industry, voted to hold a payroll tax cut extension hostage to rushed approval of the project. The White House has said the accelerated timeframe means the project will be denied. I hope so.

Regardless, the fossil fuel industry will not stop trying to conserve its obscene profits at all costs, even if it means long-term, irreversible damage to the planet from which those profits are wrung. Which is why shutting down the money pipeline running from corporations to lawmakers’ pockets is critical. To achieve that, and to prevent us from reaching the climatological tipping point Hansen and many other scientists say we’re perilously close to may require more strategic, non-violent civil disobedience of the kind I and thousands of other Americans took part in at the White House last summer.

We stand ready for such action again. Only now we have tens of thousands more allies in the Occupy movement standing with us.