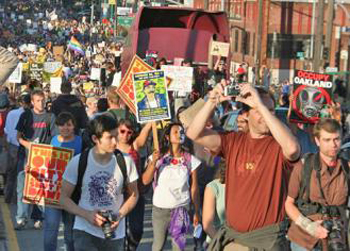 The model for the West Coast effort is the mobilization of some 15,000 people to picket the Port of Oakland during a November 2 day of action. That protest came after police violence against Occupy Oakland nearly killed Iraq war vet Scott Olsen, prompting a call for a general strike in the city.

Now, Occupy activists again want to take action–not just in Oakland, but up and down the West Coast.

While the initial focus of Occupy activists was union-busting by the grain terminal operator EGT in Longview, Wash., the planned pickets will confront other actors on the docks–such as SSA Marine, an anti-labor terminal operator owned by Wall Street powerhouse Goldman Sachs, and the anti-union policies of terminal operators who employ truck drivers to move goods from the docks to warehouses and rail links.

In fact, the date for the action was chosen by Los Angeles port drivers. December 12 is the day of the Virgin of Guadalupe, an important cultural figure in Mexico, and traditionally a day of protest for the largely immigrant port drivers. The drivers been fighting for years against company policies that treat them as independent contractors rather than employees, a practice that forces drivers to be paid per load rather than per hour, and pay for their own trucks.

As Tara Lohan pointed out on Alternet, 82 percent of the 110,000 port drivers in the U.S. are classified as independent contractors. An additional spur for the drivers’ protest in LA was the firing in October of some 26 drivers who work for the Toll Group. The reason: they wore Teamsters t-shirts to work.

Thus, on the eve of the December 12 action, port driver activists and supporters said drivers in LA and Long Beach were prepared to stay away from work, and they were appealing to their counterparts in other cities to act in solidarity.

Teamsters in the port of Oakland were also prepared to stay away from their jobs, said Dana Blanchard, a member of the Berkeley Federation of Teachers who is active in the December 12 effort:

This is a huge contradiction to all the press we are getting. After three organized leafleting shifts at the port, the feeling is also that many of the unorganized port drivers will also not come to work tomorrow. The ILWU has also officially e-mailed its members that they are not going to be escorted in by police, and that many terminals have decided to shut down or have skeleton crews in anticipation of the protests. Overwhelmingly, all of the conversations we have had with port drivers when we flier has been positive.

Predictably, shipping bosses denounced the effort in a coordinated advertising campaign in Bay Area newspapers and media outlets.More surprising has been the response of the International Longshore and Warehouse Union (ILWU). Union president Robert McEllrath issued a statement declaring that the Occupy protest was a third-party action not authorized by the ILWU, which cannot call for a work stoppage without violating its contracts.

However, McEllrath’s statement outlined steps that union members could take if they felt that the community picket made it unsafe to work–for example, as the result of a large police presence. In that case, members are entitled to notify employers, who would then call upon an arbitrator to make the decision.

But as December 12 approached, ILWU officials ratcheted up their criticism of the community pickets. In an article in Britain’s Guardian newspaper, ILWU spokesperson Craig Merrilees was quoted as describing Occupy protesters as “disrespectful, arrogant and misguided.” He added: “This is being promoted by a group of people who apparently think they can call general strikes and workplace shutdowns without talking to workers and without involving the unions.”

But according to retired ILWU Local 10 member Jack Heyman, ILWU international officials are reacting to pressure from employers, rather than the sentiment in the union rank-and-file to put the heat on EGT in Longview, where the first ship will call on the company’s scab grain operation in the next few weeks. He said:

This call by Occupy Oakland for a West Coast solidarity port shutdown is a build-up to when the first ship comes in next month. If Occupy is successful now, then momentum for a coastwide shutdown by longshore workers is highly likely when the scab ship arrives. However, with hostile statements like those emanating from ILWU spokesman Craig Merrilees and President McEllrath it drives a wedge between the union and its activist supporters.

ILWU has usually honored community picket lines like the one in San Francisco in 1977 against apartheid. And when the ILWU shut down all West Coast ports on May Day 2008 to protest the wars in Iraq and Afghanistan, it didn’t check with other port workers’ unions, like the machinists or the Teamsters.

ILWU union tops have thwarted union democracy at every turn in the Longview struggle–preventing a special caucus or an emergency meeting of all rank-and-file longshoremen in the Northwest. Occupy represents a popular outrage against the excesses of capitalism as exemplified by Wall Street. They should be greeted with open arms by the ILWU, not shunned and castigated, if unions are to prevail against attacks from the employing class.

In fact, rank-and-file ILWU members are also involved in organizing support for the pickets. “I am a longshoreman, and I support the December 12 blockade against EGT,” said Anthony Leviege, another member of ILWU Local 10. “EGT is a threat to the survival of the ILWU.”

“These ports are public,” said Clarence Thomas, a former official and veteran activist in Local 10. “People have a right to come to the port and protest. The ILWU has historically honored picket lines at the port.”

While the success of each port action is bound to be uneven, the seriousness with which activists are responding to such an audacious call to action is a sign of the Occupy movement’s continuing vibrancy.Occupy movement supporters along the Gulf of Mexico recently announced that they, too, would join the call by blockading the Port of Houston. This is an ambitious task, however, for several reasons. Houston longshore labor is organized by the International Longshoreman’s Association, a more conservative union that doesn’t share the ILWU’s tradition of honoring community pickets. Moreover, the port of Houston stretches for many miles, making it virtually impossible for a community picket to have much of an impact.

Also away from the West Coast, Occupy Denver plans to show solidarity through a blockade of Wal-Mart’s Colorado distribution center, and it has called on all landlocked Occupy supporters to take similar action. And in New York City and Chicago, Occupy activists will target Goldman Sachs with protests as well.

While the impact of the protests will vary widely by city, the December 12 action will have an important impact on the Occupy movement as it debates its next steps following the coordinated police shutdowns of encampments.

For example, the Service Employees International Union (SEIU), in the wake of its early endorsement of President Barack Obama’s reelection, recently concluded its weeklong “Occupy Congress” actions in Washington, D.C. as part of the union’s focus on the 2012 elections. A the same time, Adbusters magazine recently proposed that activists “#OccupyXmas” to disrupt consumer culture.

Occupy Oakland is spearheading a different kind of strategy, which is focused on the struggles of workers at the point of production. As one Occupy Oakland activist put it, “If the mayors of the 1 percent are sharing tactics for class war, then why shouldn’t we?”

Occupy Oakland was able to shut down the port on November 2 by setting up community pickets with rank-and-file support. It was crucial to maintain mass community pickets long enough to ensure that a port labor arbitrator rules the picket lines have made it impossible to ensure a safe work environment.

Rank-and-file longshore and trucker support was critical for all of the past Oakland port shutdowns and will be critical for the shutdown on December 12. To build these bonds of solidarity, Occupy Oakland and others on the West Coast have not only been distributing leaflets, but talking with port workers about how to fight union-busting on the waterfront and how to build solidarity between the Occupy movement and organized labor.

By building on this kind of community-labor solidarity seen on December 12 and beyond, we can link the Occupy movement with the effort to organize where workers have power–at the point of production.

This article was originally published by the Socialist Worker.