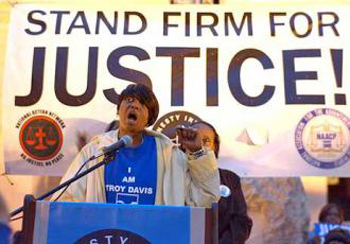 On December 1, we lost a true and courageous warrior in the fight against the death penalty and the criminal injustice system: Martina Correia. She died after a decade-long battle with breast cancer. She was 44.

Martina often joked that she had become known around the country and the world as “The Sister”–that is, the sister of Troy Davis, the Georgia death row prisoner who fought against his wrongful conviction and death sentence for more than 20 years.

Martina was Troy’s staunchest advocate, and she worked tirelessly to bring attention to her brother’s case. Her efforts to save her brother made Troy Davis a household name–not a small feat given the fact that the media was never allowed access to film or interview Troy in prison.

Over the years, she spoke to audiences large and small. She said she figured people might think, “Oh, well, that’s his sister, of course she defends him.” So she set out to make sure everyone saw the same things she did: that Troy was an African American man accused of shooting a white police officer; that police and prosecutors would do anything to get a suspect behind bars and then sent to death row; that the supposed “eyewitness” testimony against Troy was coerced, as seven of the nine original witnesses admitted; that the court system was committing a horrifying injustice by refusing to hear evidence of Troy’s innocence because of restrictions on post-conviction appeals.

And through it all, Martina, like Troy, recognized that the struggle was bigger than his case alone. She understood that the death penalty was a failure on every level and needed to be abolished.

Martina fought her illness all the while she was fighting for Troy. She surprised doctors, who, when she was diagnosed with cancer at age 31, had given her only six months to live. On the night that Troy was executed, Martina was so weak that she needed a wheelchair. But she spoke out anyway, and even stood up to declare that Troy’s death would not be in vain.

Martina gave everyone she came in contact with the resolve to keep fighting. She worked with many different organizations: Amnesty International, the NAACP, the Campaign to End the Death Penalty and many others. She helped bring all these forces together to get behind her brother and to use his situation to shed light on the injustices of the death penalty.

A case that might otherwise have gotten attention only in local newspapers instead moved people around the globe and shook the foundations of the death penalty system in the U.S. That is the impact of the movement Martina spearheaded.

When Martina was unable to attend a large rally in Atlanta to protest Troy’s pending execution, a few of us from Chicago called her during our car trip back. She was thrilled to hear that her son DeJaun had spoken out for his uncle at the Ebenezer Baptist Church–and she was filled with excitement as we told her about the outpouring of support for Troy. As she told us:

After all the years of going to speak at different events, getting on planes and in cars, and traveling all over to speak to so many different organizations, I just never would have imagined that this was going to be the result. It’s like the movement for Troy has a life of its own. It’s so wonderful. And now, if they try to go through with it, they are going to have such a hard time, because so many people are going to be outraged.

Everyone who had the good fortune to meet Martina could feel her determination and courage. In one of our last conversations, she said to me that a person from France had emailed her to say they were sorry that despite all their efforts and protests for Troy, they had failed to stop the execution.

Martina said, “I want people to know that we didn’t fail. As long as we keep hammering away at this thing, as long as we refuse to give up, we haven’t failed. We’ll be doing what Troy would have wanted us to do. Our efforts made an impact and will continue to make an impact.”

That is how she was: Defiant. Never willing to succumb to defeat. Always giving people hope and inspiration to keep fighting, even after her brother’s execution. Martina had every intention of being there to support a bill to abolish the death penalty in Troy Davis’ name when it came up in January in the “yellow dome” Capitol building in Georgia. “I am not going to be quiet,” she told me in a telephone conversation not long after Troy’s execution. “Oh no–they’re going to be hearing from me.”

In the middle of November, Martina addressed the annual convention of the Campaign to End the Death Penalty via speakerphone. It was one of the last speeches she made, and she was as focused as ever on the fight ahead:

One lasting image I have of Martina is seeing her at Troy’s funeral, wearing a bright white suit. She was determined that the funeral should not be about his death, but about his life and the continuation of the struggle that he was so much a part of. Though looking frail in her wheelchair, she nonetheless stood several times to clap and acknowledge the many voices who paid tribute to Troy and who called for action to win abolition.

Like so many, many people, I feel honored to have worked alongside Martina and Troy. While it seems unbelievable that we will have to carry on without the two of them in our midst, continue we must.

Martina was, of course, very fond of the slogan “I am Troy Davis,” and we heard those words echoed around the country and the world in our struggle to save him from execution. Now, I think we need to get acquainted with another slogan, too: “I am Martina Correia.”

This article was originally published at the Campaign to End the Death Penalty website.