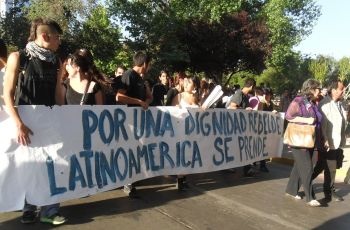 In support of Chile’s ongoing student protests, and voicing their own demands, thousands of people took to the streets in more than a dozen cities in Latin America Thursday demanding quality public education.

Some 10,000 protesters – according to the organisers – marched through the streets of Santiago once again demanding reforms of the educational system. And again, there was a crackdown by the anti-riot police, who arrested some 60 people.

The demonstrations in other cities in the region were peaceful, with the exception of an incident in Bogotá, Colombia where the police fired tear gas.

“Today is a very special day because we are marching throughout Latin America,” Esteban Miranda, president of the University of Chile law students centre, told IPS.

He said the region-wide mobilisation was a demonstration of the similarity of demands by students in the region, as well as of the support for the movement in Chile.

“They are hanging in there with us, because we still have a long road ahead,” the student leader said.

José Barrera, a civil engineering student at the Catholic University, said that what is happening in Chile “is an example of what education is like when it’s privatised, when it is no longer defended as a right of everyone.”

An education law enacted by the 1973-1990 dictatorship of General Augusto Pinochet set off a process of decentralisation and privatisation that gave private schools free rein to pursue profit and use entrance exams to select their students.

The Chilean system is not just divided into paid private education and tuition-free public education, but is split into three: municipal schools run by local governments, which are publicly funded and free, state-subsidised private schools, and private schools that charge tuition.

Within the sphere of state-subsidised private education, students get free tuition at some schools, while at others families pay monthly fees, an arrangement known as “shared financing.”

The protest movement is calling for an end to the freedom of private schools receiving state subsidies to levy fees at will. Instead of the current system, under which administrators of these institutions rack up profits, the demonstrators want school fees to be invested in under-funded public schools.

They also want public primary and secondary schools to be directly managed by the Education Ministry, instead of by local governments, because the decentralisation accentuated the inequality in education quality between rich and poor districts.

“Countries that see the Chilean model as an example, and that are moving towards privatisation, have to realise how harmful this kind of system can be for education in general,” he argued.

The march in downtown Santiago was supported by organisations of students from secondary schools, technical, vocational and arts institutes, as well as trade unions and teachers.

Luis Garrido, a representative of the Sindicato Único de Trabajadores de la Educación (SUTE) teachers union, said the protest was against the rightwing government of Sebastián Piñera’s insistence on continuing to apply the logic of the market to the educational system.

“Capitalism is profits, business, buying and selling, and that is not what educators are about,” said Garrido. He added that the movement in which teachers and students have come together is demanding a “social transformation.”

The participants in Thursday’s march say the student protests have become a broader social movement that will continue to fight for structural changes above and beyond the educational system, such as reforms to the free-market, neoliberal economic system inherited from the dictatorship.

“We want to tell the Chilean government that even though this has dragged on, we can continue, because we are still strong,” Alfredo Vielma, spokesman for the Asamblea Coordinadora de Estudiantes Secundarios assembly of secondary school students, told IPS.

After six months of conflict, including more than 40 marches in Santiago and other cities around Chile, there is no sign of an agreement with the Piñera administration. The government says the debate should be left to Congress, which is currently discussing the share of the national budget to be assigned to education next year.

“If this really is about education, the march is completely gratuitous; it is only causing problems for people,” said the minister, who blamed Congress for the failure to reach a solution.

But the students said the conflict is not limited to the debate on the education budget, which is merely discussing whether to offer fewer or more scholarships or student loans, without addressing the need for reforms.

“What they are doing in Congress is whitewashing the system by providing a lot of scholarships. But they aren’t responding to our demands,” said Miranda. “What we want is direct financing of the institutions; we want free quality public education for all.”

The university student leader said the debate on the budget may make some progress, but the problems underlying the conflict cannot be solved by the same politicians who have protected the system for decades.

“We don’t agree that this can be resolved in parliament; we want it to be resolved by consulting with the citizens, through a plebiscite or people’s assemblies,” he said.

“The problem is Chile’s institutions, and education is a symptom of that larger problem,” said Loreto Fernández, president of the social science student centre at the University of Chile.

She told IPS “we need a more democratic country, where the voices of society are really heard. It can’t just be the same old political class reaching decisions between four walls.”

* With additional reporting by Helda Martínez in Bogotá.