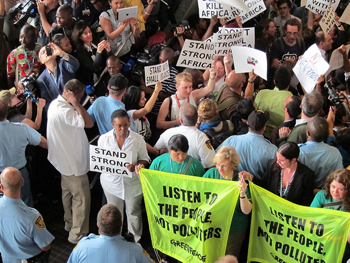 This past week, world leaders, technocrats, and NGOs descended upon Durban for the 17th Conference of Parties (dubbed Conference of Polluters by its critics). After 17 years of meetings to address climate change, the lack of action from world leaders clearly shows that the biggest polluting nations not only lack the political will to address the issue, but also seem to be actively carrying out the anti-environmental agenda of the largest corporations on this planet.

The sizeable NGOs who have made their name fighting climate change are surely correct when they link the Obama and Harper governments, and indeed the entire COP process, to the likes of Royal Dutch Shell, Eskom and Koch Industries. Some great slogans have come out of this opposition to the conference. Earthlife Africa’s catchphrase on their t-shirts tells us to “never trust a COP” playing off of the duplicity and corruption of both the police and the COP process.

Yet the opposition front of civil society that came together to form C17 and organized this past Saturday’s Global Day of Action, tells only part of the story. The issue that is glossed over relates to the definitions of who is ‘civil society’ and therefore who was really speaking at the myriad events organized by C17 NGOs, such as the International Climate Jobs Conference, the People’s Space at UKZN, Greenpeace’s Solar Tent, and even the 10,000 strong Global Day of Action.

On the Climate Bus Part 1

On the 1st of December, we embarked on a grueling 27 hour trip from Cape Town to Durban. The C17 Climate Bus Caravan was populated mostly by poor activists and lower level NGO workers. The conditions in our two buses coming from Cape Town were less than ideal, especially the hourly pit-stops that resulted from the lack of a toilet on-board. The organizing was also less than ideal; we got lost on the way and did not know where we were staying once we arrived in Durban.

But these were hardcore activists, many who live in shacks or council homes and some who have been shot at and jailed for their activism. Conditions were not the issue. The overriding complaint I heard over and over from fellow travelers was the unfairness of the situation: why were the actual NGO directors who paid for the trip not on the bus with us?

Slumming it at the Refugee Camp

Upon arrival in Durban, we eventually found our accommodation for the next three days: C17’s Climate Change Refugee Camp. As activists, we were willing to make a political statement by living in huge communal tents with sub-par ablution facilities, dirty blankets and conditions mirroring a refugee camp.

As Mzonke Poni from Abahlali baseMjondolo told me: “The camp was a true reflection of a people’s space. The actual People’s Space at UKZN was more of an intellectual space…I enjoyed the experience at the camp.” Indeed, communal spaces where the poor are dumped are often much more open and accessible spaces than the rigidly organized initiatives built to include the poor.

Once again, the underlying grievance behind the majority of participants was that the executives of the C17 social justice NGOs who organized the camp to make a political statement, were sleeping comfortably in beach-front hotels.

What became clear throughout the trip was that we (the thousands of activists brought in from all over the country) were a crowd whose primary purpose was to provide legitimacy to the C17 NGO’s claims that their agendas had popular support. This was why free t-shirts were handed out advertising NGOs and their environmental justice campaigns.

Furthermore, activists’ trips sponsored by C17 NGOs were told to wear Earthlife Africa or Million Climate Jobs shirts instead of those of their own organizations. Activists whose trip was sponsored by the Democratic Left Front (DLF) were encouraged to wear only DLF t-shirts. What this meant is, as Mzonke Poni put it, “the role of community-based organizations (CBOs) have been undermined…the crowd was rented to top up the numbers.”

Indeed, there was effectively no space for CBOs and movements to talk about what climate change actually means to their lived experience. Their anti-climate change agenda was defined on their behalf. Even at the massive march on the 3rd of December, only a couple of high-powered speakers such as COSATU’s Zwelinzima Vavi were given a space to speak.

As Charles Adams from Mitchell’s Plain explained: “They [NGOs] should have involved the community people and given them a space to speak, not just the organisers.”

This was evident not only at the NGO controlled march, but also at all other C17 events. It seems that at times even the Occupy COP17 General Assembly was itself occupied by NGOs, and its agenda set from the top-down by these organizations’ directors.

In one instance, community activists eventually fought back. According to participants, the DLF leadership had placed members in accommodation “not fit for a human being” and given “expired food” while they themselves stayed in much better lodging. Members revolted against the DLF leadership by disrupting a public lecture and shamed them into ensuring that their conditions were improved. Still, members remained angry and unsatisfied at the reproduction of inequality by the DLF leadership.

The end result was not only that C17 NGO autocrats used the bodies of community activists while silencing their voices, they also undermined the entire anti-climate change agenda. A discussion with Melissa Jaxa from the artistic collective Soundz of the South was instructive: “I think we should be consulted as the masses. As we call ourselves socialists, we should make decisions together about who should speak at our events. They [C17] didn’t take us seriously. We are against COP17 but we ended up working with them”.

In fact, anyone present at the Global Day of Action would have clearly seen the ANC supporters donning official eThekwini COP17 uniforms, shouting pro-Zuma slogans, and abusing and assaulting other protesters. How could the C17 organizers have allowed them to participate in the same space as a march meant to call Zuma and other world leaders to account? How did the municipality get away with using public funds to rent an ANC crowd of their own?

In other words, we activists felt that we were sold out by the very NGOs that claim to represent our interests. As INCITE’s The Revolution Will Not Be Funded shows, NGOs have no structural accountability to their so-called beneficiaries. They are externally funded organizations that, like the World Bank, are accountable to outside forces through the power of the purse.

We who feel that another (more just) world is necessary should then look toward the unfunded revolutions in Tunisia and Egypt or the Occupy Movement for reference. We need to support community self-organizing and accept community driven agendas and philosophies. This does not need millions in funding. But it does need painstaking perseverance and commitment to radical democratic politics. In other words, a commitment to building authentic peoples spaces.

On the Climate Bus Part 2

On the road back to Cape Town, the one bus broke down twice while the other’s tire burst. In Colesburg the bus drivers purposely left dozens of activists stranded until those of us still onboard forced the buses to turn back to get them. After spending another 30 hours on the return bus, we finally arrived at the Alternative Information Development Centre (AIDC) in Cape Town at 23h30. However, half of us were stuck once again; someone forgot to organize taxis home.

Even something as simple as a bus trip becomes a struggle when we as participants have no say.

RELATED COVERAGE FROM THE INDYPENDENT:

Fighting for Climate Justice in South Africa: An Interview with Trevor Ngwane at the Climate Change conference in Durban, South Africa

Saving the Forests with Indigenous Knowledge