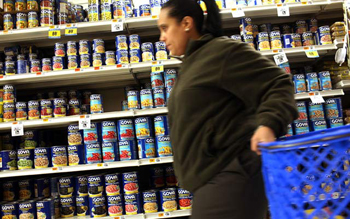 This week, the White House announced a new plan to save a few federal dollars: a crack down on food stamp fraud. Over 46 million people rely on the federal food assistance program to eat, according to Agriculture Department statistics. For many families, it’s the only assistance they’re eligible for in the recession’s long slump. As with anything where money’s involved, it’s also vulnerable to fraud and rule-bending.

But food stamp fraud of the kind described by the administration is actually a very tricky tangle that can’t be reduced to good and bad recipients. And it’s a perfect example of how poor people get squeezed when Democrats and Republicans compete to slay the government-waste boogeyman.

The president and vice president on Monday rolled out a plan to “ensure program integrity …[to] make sure the program is targeted towards those families who need it the most.” The White House statement, which was released as part of the Obama administration’s “Campaign to Cut Waste,” noted that “fraud occurs relatively infrequently”—about a penny on every dollar of food assistance is used fraudulently—but that to protect taxpayers it is nonetheless important to go after misuse.

According to the Washington Post, the administration plans to target two types of food stamp fraud—retailer fraud and fraud committed by beneficiaries. On the retailer side this means penalizing grocery stores and bodegas from stealing people’s benefits by keeping their PIN numbers after beneficiaries use their government issued debit card to buy food. On the beneficiary side, the plan is to go after people who turn their benefits into cash. The Post describes this scenario:

… beneficiaries who receive monthly deposits of food aid on to plastic cards similar to bank cards intentionally use SNAP benefits to purchase water or other beverages with bottle deposits, dump the liquid and then obtain cash for bottle deposits.

The premise is that food assistance should only go to those who actually qualify, and that those who get it should only use it for their families and nobody should be making a profit off the federal program.

That all seems right, but it’s complicated.

A couple years ago, when the recession was still news, I wrote a Colorlines investigation on single moms struggling to make it. Mothers who’d been kicked off of cash assistance because of harsh welfare reform rules told me they now sell their food assistance at the corner bodega for 70 cents on the dollar, just to cover basics like utility bills and clothes for their kids.

One mom I met, a 28-year-old with two young girls who could not find a job and had been booted off cash assistance, had a choice each month when the benefits came in: trade the stamps for cash to pay rent or use the benefits solely for food and risk becoming homeless with her kids. That wasn’t much of a choice, but since she felt she could scrape by getting cans of food from soup kitchens and from friends, she decided she needed the cash and the roof over her head.

It’s hard to see how she and her family should be the target of an anti-fraud campaign.

The practices of retailers is a little more clear cut. Food stamp beneficiaries walk into a corner bodega, hand over their card and the bodega hands back about 70 cents on the dollar in cash. The stores make a profit and there’s little doubt that the practice is exploitative and fraudulent.

The food stamp program has expanded rapidly in the recession and in many way’s it’s been a huge success, putting food on the tables of tens of millions in the deepest recession most of us have ever lived through. It’s rarely noted though that for many families food stamps are often the only real assistance program left. With the welfare program in many states barely responding to growing recessionary need and unemployment insurance running out or never kicking in for many poor families, food assistance is all there is. Some recipients decide they have to use the benefits illegally to fill in the gaps left by our nation’s political choices.

According to the White House, last year, “investigations of individuals and retailers resulted in over 44,000 persons being disqualified from SNAP and 931 retailers being permanently barred from accepting benefits.” Going after exploitative retailer fraud may make some sense, but beneficiary fraud of the kind the White House is concerned with may be less a matter of fraud than it is an exercise in creative survival on the part of those doing the surviving.