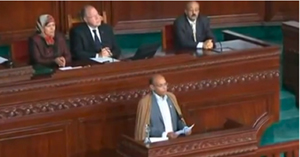 Tunisia’s new president Moncef Marzouki has been sworn in in front of the country’s constituent assembly as the nation turned a new page nearly a year after the uprising that toppled Zine el Abidine Ben Ali in the first of the so-called “Arab Spring” revolutions.”I will be the guarantor of the national interests, the state of laws and institutions. I will be faithful to the martyrs and to the objectives of the revolution,” Marzouki said as he took the oath of office on Tuesday morning with his hand on the Quran.

Wearing a burnous, a long traditional woollen clock, he solemnly promised to be president of all Tunisians and to do everything he could to improve the living standard of his compatriots.

He paid homage to those who died during the uprising against former president Ben Ali a year ago.

“Without their sacrifice, I wouldn’t be here in this place,” the former activist said with tears in his eyes.

“It was a historic moment that Tunisians will remember for generations to come,” he said.

Marzouki outlined the blueprint of the government and political institutions, adding: “We’re committed to democracy and we’re going to help our friends in Syria and Yemen,” said our correspondent.

He was elected with 153 votes in the 217-member constituent assembly, with three of the 202 deputies present voting against, two abstaining and 44 opposition members casting blank ballots.

The finance minister in Tunisia’s new coalition government will be nominated by a left-leaning party while the Islamist Ennahdha party will hold the foreign affairs and interior portfolios, two coalition sources told the Reuters news agency.

They said Ennahdha and its two smaller coalition partners had agreed that the finance ministry would go to the left-wing Ettakatol party. The name of the candidate was not confirmed.

The sources said Ennahdha official and former political prisoner Ali Larayedh would be interior minister, and Ennahdha’s Rafik Abdesslem, an analyst with Al Jazeera, would be foreign minister.

Abdesslem is married to one of the daughters of Ennahdha’s leader, Rachid Ghannouchi.

Marzouki, a French-trained doctor, headed the Tunisian League for the Defence of Human Rights (LTDH) from 1989 until he was forced out of the country in 1994.

An admirer of India’s independence hero Mahatma Gandhi, he travelled to that country as well as South Africa after its transition from apartheid to democracy.

A prolific writer, he has penned several books in French and Arabic including one titled “Dictators on Watch: A Democratic Path for the Arab World.”

Marzouki’s first order of business will be to name the prime minister, with Hamadi Jebali, the number two of the moderate Islamist Ennahdha party, expected to get the nod.

Critics accuse Marzouki of being a pawn of Ennahdha, the Islamist party which came in first in the October 23 constituent assembly elections with 89 seats.

Marzouki’s Congress Party for the Republic, whose symbol is a pair of red glasses inspired by his giant spectacles, was second, winning 29 seats.

His election came two days after the assembly adopted a provisional constitution allowing the country to name a government.

The vote came after five days of often tumultuous debate which saw hundreds of people demonstrating outside the assembly building shouting slogans demanding “Freedom and dignity”.

This article was originally published by Al Jazeera.