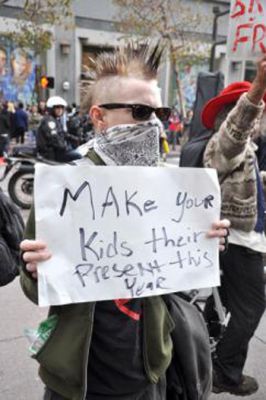 With the holiday gift-buying season in full swing, Adbusters magazine, which issued the initial call to Occupy Wall Street, has launched #OccupyXmas. The idea, according to Adbusters, is to persuade consumers not to buy gifts and to “hit the empire where it really hurts…in the wallet” by organizing “a whirly mart, Santa sit-in or Jesus walk” (though what these actions might look like is not at all specified).

In one sense, this represents a return to the bedrock principle that has anchored Adbusters for two decades–a snarky, hipper-than-thou condemnation of consumers and consumption. For example, in 2000 Adbusters founder Kalle Lasn published the book Culture Jam: How to Reverse America’s Suicidal Consumer Binge–and Why We Must.

But the #OccupyXmas campaign is actually worse than looking down on consumerism. Consider the call to action for #OccupyXmas.

You’ve been sleeping on the streets for two months pleading peacefully for a new spirit in economics. And just as your camps are raided, your eyes pepper sprayed and your head’s knocked in, another group of people are preparing to camp out. Only these people aren’t here to support occupy Wall Street, they’re here to secure their spot in line for a Black Friday bargain at Super Target and Macy’s.

In the space of three sentences, this passage summons the courage and sacrifice of Occupy protesters and the anger felt around the country at police repression, and turns these sentiments against an undeserving target: holiday shoppers looking for a bargain.

Take, for example, this tweet featured on Adbusters #OccupyXmas page: “Shaking my head…Wal-Mart shoppers ‘riot’ over two-dollar waffle irons.” The tweet links to a video of customers shrieking as they try to grab a waffle iron before all are taken.

But focusing hostility against consumers instead of the 1 percent only serves to mystify the circumstances that create such frenzies.

First, there’s the plain fact that people are struggling especially hard this year to make ends meet, and the search for affordable but nice gifts for family and friends is cause for anxiety for millions of Americans.

In a recent survey, 45 percent of U.S. adults said that they will face difficulties affording purchases of gifts this year, and of those who report these struggles, two-thirds say that this year will be worse than last year. More than 20 percent of people plan to get another job to help them afford the holidays this year.

Second, a “riot” is precisely what Wal-Mart and other retailers are trying to create in their stores. They do this in part by making a very limited quantities of desirable items available at very low prices in order to create a crush of demand. That’s how big-box retailers get people out of bed at 4 a.m. for special Black Friday sales. The corporate behemoths are good at this kind of Marketing 101, and–surprise–it works.

It should also be pointed out that at some of these holiday sales, people may be buying presents, but some may be buying for themselves what they can’t afford at any other time of the year.

Adbusters mayhave shown a knack for tapping into the underlying discontent with the system by coining the slogan Occupy Wall Street, but thankfully, the call to OccupyXmas hasn’t attracted the same following. Indeed, many who identify with the Occupy movement have criticized the #OccupyXmas approach.

But there are others who have run with the call, organizing “mic checks” in Wal-Marts and K-Marts around the country on Black Friday and holding pickets in malls with signs saying, “Don’t buy gifts, make your own.”

This is counterproductive for the Occupy movement on at least three levels.

First, it is remarkably foolish to direct movement energy at attacking probably the most beloved of American holiday traditions. This is especially true at a time when our movement has an opportunity to spread the anti-corporate, tax-the-rich message to the largest audience in more than a generation. Occupy activists need to build bridges that will bring more people into the movement–whereas this campaign will do the exact opposite.

Some 20 years ago, Canadian artist Ted Dave founded Buy Nothing Day, annually timed to coincide with Black Friday. Adbusters helped to promote Buy Nothing Day over the years, and Dave says he “enjoyed” watching Adbusters spark the Occupy movement. But he doesn’t think that Adbusters‘ “#OccupyXmas campaign will build on the Occupy phenomenon.” He continues:

In our sound-bite culture, brevity and clarity are crucial. Focusing on an anti-Christmas message isn’t really going to help [the Occupy] cause because Christmas just doesn’t have enough to do in a direct way with stock market crashes and government bailouts. At a time when they finally have the ear of the public via mainstream news coverage, they move further away from their initial message of dire economic disparity and corporate accountability…

Linus and Snoopy taught us all years ago that Christmas has been overcommercialized, but not everyone celebrates in a garish way…People donate generously at Christmastime, and the idea of trying to connect it to something like the Occupy movement seems awkward and spurious. I don’t think you win many friends by knocking the one day of the year people attempt to treat each other decently.

Second, #OccupyXmas accepts the very logic of consumerism that it decries at a time when millions of people are open looking at the world in a way. After all, it’s the 1 percent that relentlessly encourages us to think of ourselves only in terms of what we consume, to measure ourselves by what we can buy, and to define our identities in terms of the products we possess.

What the Occupy movement has succeeded in doing was taking the discussion beyond a focus on the consumption choices that we as individuals make, and creating a new focus on how those decisions are embedded in a larger social framework–one that benefits the 1 percent at every turn, from individual and corporate tax policy, to the drive to privatize public institutions, to the outsized political influence that the 1 percent wields.

And instead of focusing on the consumer and lifestyle choices we make–or don’t make–as atomized individuals, the Occupy movement brought together large numbers of people around the collective principles of solidarity, mass participation and struggle from below.

We have been witness to popular uprisings around the globe that have brought down U.S.-backed dictators in Tunisia and Egypt, we have watched a mass uprising in Wisconsin, and we saw the first general strike in the U.S. in more than half a century.

All of these struggles began to build on the public consciousness of the power of ordinary people to act collectively. They also gave our movement living examples of what people, when viewed as workers rather than consumers, can do to use their social power. This is essential if we are to confront the economic and political power of the 1 percent.

When longshore workers at the Port of Oakland honored a mass picket organized by the Occupy movement on November 2, the shutdown of America’s fifth-busiest port did hit the empire in the wallet. But it did more than that. It gave working people a glimpse of the impact they can have on the global economy.

In this context, #OccupyXmas seems especially backward–an attempt to encourage us to return to the view that we should aim to “vote” for the change we want in society by how we use our consumer dollars–just when the example of the power of working-class protest and struggle has been shown vividly.

Third, #OccupyXmas starts from the assumption that the desire to consume has necessarily reactionary political implications, and that if we could somehow curb those desires, our world could be better.

This is plain wrong. The problem isn’t consumption, but the cost-cutting, wage-depressing, pollution-causing methods of production that make profits for the 1 percent.

The fact that the economic crisis has made it so difficult for millions to afford the holiday season combined with the way that the Occupy movement has changed the debate about inequality in society means that consumption choices can be linked to an entirely progressive agenda–of demanding better pay and benefits for workers so they can make ends meet without a desperate struggle.

Rather than falling into the trap of opposing Christmas, the Occupy movement should be clear that it is the 1 percent that is making the holidays miserable for the rest of us. We should make clear that it’s the corporate giants and their political servants who are behind the widely felt anxieties of the holidays. The movement should sympathize with the anguish people feel in trying to afford gifts that will bring a smile to their children’s faces at the holidays.

In truth, for the vast majority of what we need to survive and live, there are no realistic alternatives to buying them from capitalist businesses, large and small. This is part of the dynamic of capitalism–of separating individuals and families from the means to produce for themselves.

If you happen to be one of those people who enjoys making presents for everyone on your holiday list, rather than buying them, that’s great–but there’s no need to demand that everyone else should be just like you, or be dismissed as just another sheep of consumer culture.

As a moral value, [anti-consumerism] reeks of puritanism, because it brackets off certain pleasures as base and animalistic, and therefore suggests we should be better than that. The parallels between leftists scolding me about how I don’t know what I really want and need in terms of material goods and conservatives scolding me about how I don’t really know what I want and need with regards to sex are just too uncomfortable for me. Plus, declaiming the pleasure of having a nifty new toy makes it a matter of individual worth, making it a culture war issue, allowing wingnuts to pretend they’re defending the basic right to feel pleasure against nanny state liberals.

Our movement should demand that the 1 percent give back what they stole–and not blame the very people whose solidarity and collective action can make that holiday wish into a reality.