A recent report by the Asia Foundation cites corruption—next to security and poverty—as one of the three issues Afghans are most concerned about. A recent example of corruption can be found in the transportation of timber in Kunar. According to a member of the Lower House of Afghanistan’s parliament, who did not want his name to be disclosed, the Afghan Ministry of Finance has estimated that the revenue generated from the transportation of the timber from Kunar to be over 2,000 million Afghanis ($50 million USD), but after the timber was taken away the Kunar provincial government says that they collected just 480 million Afghanis from it. The problem in the Kunar timber industry is just one of the many examples of widespread corruption in the country.

Most Afghans see the direct impact of corruption in their daily lives. We have to pay bribes to the government officials for minor services, such as getting a national identity card. Provincial officials use their political influence to obtain shares in the development projects that are implemented in their province. Nepotism and political corruption has increased to drastic levels. The central Afghan government is not only callous to this, but its complicity is apparent. Meanwhile, provincial officials are becoming increasingly despotic as they compete with one another for more of the spoils. They act is if they are not accountable to the people, the Constitution or a system of law. Unfortunately, they are right.

There is no manner for the population to hold the government to account. In cases of extreme pressure, the central government sends a delegation to evaluate an issue in a province. The delegation goes to the province, spends its time with the corrupt official, and returns with gifts and pockets full of cash. Thousands of such commissions and delegations were made by the Afghan government in the last decade, but they have not shown any positive results.

I have often been asked what are we Afghans doing to change this situation. My answer is always the same: We are not doing anything. Ordinary Afghans feel helpless. We feel stuck with this government, and we feel that international intervention is necessary to make it any different. We are so tired of these paradoxes of conflict that we can only think about our lives at this moment, today. Tomorrow is too far, as if beyond the next mountain. This ethos of survival has made our people passive, and even numb, towards these abuses.

Meanwhile, the Afghan government has done little to win the hearts and minds of its people. It seems that politicians either do not want to act against corrupt officials, because they benefit from the graft, or they are incapable of acting against them, because they are politically so weak. The level of foreign assistance and the careless involvement of the international community generally exacerbates this problem. If the international community intends to achieve the goal of stability by representative democracy, then it needs to start helping Afghan civil society mobilize itself against corruption. Civil society should be encouraged to exercise nonviolent civic mobilization on the local level against corrupt officials.

Some of the tactics of nonviolent civic mobilization, such as protests and boycotts, have already been used in Afghanistan against the government and other entities. Even the Afghan Mujahideen, while fighting against the Soviet occupation in Afghanistan, created a parallel government in Peshawar as a tactic of nonviolent civic mobilization. Further, Afghan culture has some institutions—like the Jirga, a consensus-based tribal assembly—that can be used for mobilizing against corruption.

However, our civil society is not yet well-organized in a way that cuts across ethnic and linguistic boundaries. It lacks the knowledge and experience to launch strong civic mobilization campaigns. A low level of organization in such campaigns can make them easy to hijack by politicians or insurgents.

Nonviolent civic mobilization campaigns are necessary for bringing Afghans from passivity to activity. If people are empowered, then they can affect change in their society. Changing people’s mentality to think that this is even possible, however, is the first and most important step in empowerment. It is a long process and should not be expected to take place overnight.

People must be first educated, disciplined in thought and then mobilized for change. Citizens of Afghanistan must be taught nonviolent conflict as a means of struggle, especially through its roots in Islamic tradition. Afghan civil society throughout the country must convey the message that people have a right to employ nonviolent struggle for making a difference in their lives. 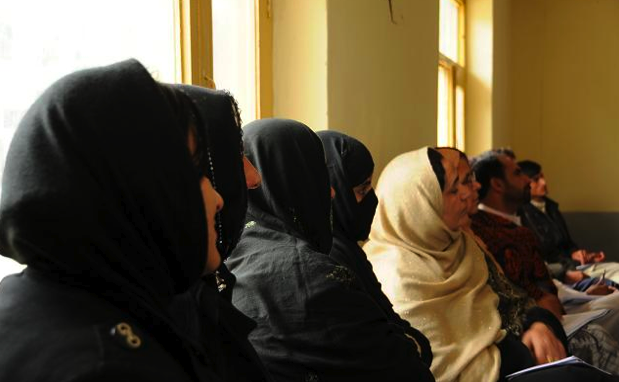 A workshop led by the author's Organization for Social, Cultural, Awareness, and Rehabilitation.

Part of the problem, too, is that Afghan security forces, particularly the police, lack a culture of tolerance. They do not recognize that ordinary citizens have a right to participate in peaceful demonstrations and protests. The Afghan security forces need to be educated in nonviolent civic mobilization and other related legal issues so they do not continue to needlessly suppress peaceful protestors and violate the basic civil rights of others.

Youth across Afghanistan, particularly in big metropolitan centers, have realized the need for nonviolent mobilization. They are mobilizing. Almost every week, we read that youth and university students are taking action for bringing change to their country. Volunteer non-political associations have been established, Facebook groups have been created, and youth are organizing against the status quo of conflict and corruption.

The Arab Spring has shown the world that Muslims can ably employ methods of nonviolence and democracy. Many Afghan youth would like to follow suit, but they lack guidance and direction for implementing such campaigns. They lack expertise in organizing across ethnic groups and mobilizing the whole population. They do not know where to begin or how to begin. They need experience and leadership.

Once Afghans understand that they are empowered, they will find their own ways to eradicate corruption and struggle nonviolently against ineffective officials in their localities. This will help strengthen governance, bringing Afghans closer to a more legitimate democratic government than the international community ever could.