The destruction of the Post Office has moved into a higher gear.  Last year 3600 communities were put on notice that they will likely lose their local post office. “We will start to see post offices closing at the rate of a hundred a week,” predicts Steve Hutkins whose Save the Post Office is by far the single best source of information on all things post office.  “They've been closing at a rate of one hundred a year for the past 40 years.”

The Postmaster General promises to close half the country's 32,000 post offices over the next four years. He will be closing more than half the nation’s 487 mail processing centers even more rapidly.

The high handedness with which the post office is undermining our communities infuriates growing numbers.  Speaking for many, one lady in Lodi, Texas writes, “It appears that the USPS has set these closing procedures on autopilot and there is really nothing anyone can do to stop them…They don’t actually ‘study’ a post office for closure; they target it for closure and then proceed to process it.  There is NO careful consideration made.”

A nationwide grassroots resistance is emerging that cuts across party lines, uniting rich and poor, rural and urban, black, white and Hispanic.  Rallies protesting closures have occurred in half a dozen states. They are fighting to save a government institution that fundamentally contributes to their sense of community, of social cohesion, of well-being. “The postal service tries to say there is no historical significance to (our) post office”, writes William Duncan, a resident of Grapevine, Arkansas.  “We beg to differ. 131 years in a community is historical no matter where you are located. It is the only office remaining in our community, due to school consolidations. But, without the post office, Grapevine no longer exists. It becomes a place, not a community.

After the Prairie City, South Dakota post office closed Daniel Beckman, a recently widowed farmer told the Wall Street Journal,   “That was the gathering place for people to come in the mornings, have a cup of coffee or a can of pop, and visit, but we don’t have that no more.  All that’s left in the town now is just a church; it’s totally depressing.”

The New York Times describes Neville, Ohio’s postmistress, soon to be unemployed as “anything but a faceless bureaucrat—she plays a community booster, historian and newscaster, telling people why that ambulance came to town a day earlier and warning people to lock their doors when an escaped convict was in the area.”

But a sense of place has no place in the decision making calculus the post office management is using.  By law management must assess the impact of a closure on the host community.  But in doing so the postal service puts no value on community itself.  Perhaps even more remarkable, it doesn’t even take into account the out of pocket costs to the community.

To management closing a post office results in all savings and no costs.   This public institution is using a cost-benefit methodology virtually identical to that used by Walmart or McDonalds.  Indeed Dean Granholm, vice president of delivery and post office operations makes the comparison explicit. “We’re not the only ones going through this trend. All sorts of retailers are trying to find ways to do this.”

What would happen if the postal service actually did take into account the real cost of closures to the community?  Consider the case of tiny Cambridge, Maine, population 520.  Its post office serves as a community hub and by abutting the town’s general store sustains its only other meeting place. The post office estimates a closure will save $91,000 a year. (Whether that figure is accurate we’ll never know because the post office rarely justifies its numbers.) The alternative post office is 5 miles distant. With $4 a gallon gas the 10 mile round trip will cost the community over $100,000 a year, excluding depreciation on the car, accidents from driving 10 miles on Maine’s wintry roads or the value of people’s time.

Students at the University of Wisconsin-Madison undertook a more sophisticated analysis.  They chose to examine a rural post office that as a result of its tiny revenue and nearby alternatives would best justify closure by the economic model the post office uses.  After taking into account the additional transportation related expenses, they determined the post office would save $560,000 while the community would lose $1.3 million!

Adding insult to injury, the postal service is disrupting the lives of tens of millions of Americans to save, by its own estimate, an almost trivial sum.  Closing all 3600 on its list would save $200 million, .03 percent of a budget of $64 billion.

Communities can appeal a closing. But their chances of success are slim to none because a tie vote at the Postal Regulatory Commission affirms management. And voting tends to break down along party lines.  And Republicans support closure. And two of the four members of the Commission are Republicans.  A recent week saw 9 appeals and 8 decisions.  Seven were affirmed.  Six of these had 2-2 votes. 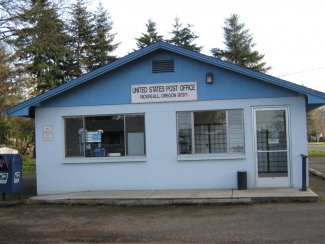 Why are Democrats keeping mum about the fact that Republicans are playing a key role in closing our post offices?

The postal service is also planning to close more than half its 487 processing centers.  These are not community gathering places but their closure will significantly burden their communities.  In Springfield, Oregon for example, the closure of the Gateway plant will lead to the loss of 68 jobs and the movement of another 70 or so to Portland, a severe blow to the local economy.  And the local area will experience significant indirect costs as well.  U.S. Postmaster General Patrick R. Donahoe concedes that “local mail would be a two-day product rather than a one-day for mail dropped in the blue mailbox.”  As a 30 year veteran mail clerk at the Gateway plant that serves southern Oregon explains a several day delay might well kill weekly newspapers.  Ironically in its first 200 years of operation the post office was required to deliver newspapers at a low rate to fulfill its public mission to promote an informed citizenry.

All of which means that popular resistance will reemerge in the spring and move into high gear just as the election campaign heats up.

We need people to stand in the doorways of Post Offices and insist, “Not on our watch”.  We need to insist on a national conversation about whether the Post Office deficit needs to be tackled by dismantling a universal infrastructure built over 225 years, robbing thousands of communities of their gathering places and eliminating hundreds of thousands of well-paid jobs.

We need to inform Americans that the post office was debt free in 2005 but in 2006 was forced to spend some $5 billion a year to prepay 75 years of retirement benefits over 10 years, a move I discuss in more detail here.

We need to explain that rather than cutting back services, the post office could choose to expand them by, for example, reviving the postal savings bank it operated so effectively from 1911 to 1966.  In 1934 the postal savings banks had an astounding $1.2 billion in deposits, equal to about one third of all deposits at the nation’s Savings and Loans.

We could take a page from some of the more innovative private companies and bypass management to ask the front line postal workers how to make the post office more efficient.   A few weeks ago John Meredith, a former letter carrier wrote to his Congressman offering one suggestion:

“Letter carriers are forbidden by management to deliver mail in the easiest and fastest way.  For instance, the Post Office now has machines that allow mail to be already sorted in order of delivery when the carriers prepare the mail to go out on the route.  This does save time in the office, but when the carriers are out on the street, they have one bundle for the letters, another bundle for the magazine-size mail, another bundle of ads, and maybe even another bundle for a second set of ads.  They have to stand in front of every house to sort this mail all together.

How do you think a carrier on a walking route can do that, especially when so many of them are now working in the dark?  I believe the rural route carriers can sort the mail together in the morning so when they go out on the street they just have to use one motion at every delivery point.”

And finally, and perhaps most importantly, we might suggest revisiting the decision made in 1970 to end taxpayer support for the post office and transform it into an increasingly private enterprise that looks to strengthen its internal balance sheet by weakening the balance sheet of hundreds of millions of Americans it serves.