The victory is a reminder that in the four months of the Occupy Wall Street (OWS) movement, it has relied on an army of legal supporters in the face of police repression and mass arrests. One such group is the National Lawyers Guild (NLG), which has been working around the clock, springing protesters from jail and documenting police tactics. The activist attorneys of the NLG are dedicated and well trained, but OWS has been a test like no other.

Gideon Oliver, head of the NLG’s New York chapter, had a busy week during the Republican National Convention protests of 2004, in which 1,800 people were arrested. The 2004 RNC was a dramatic confrontation, but it lasted only a matter of days. “No one expected such a long standing occupation,” Oliver said during an interview at his lower Manhattan office. “Since Sept. 17, we have increased our staff and volunteer legal workers.” More than 2,000 have been arrested in the city since the occupation began.

Because most OWS protesters who are arrested are charged with low-level offenses, the NLG is able to spring these people from jail with relative ease, with OWS working groups committed to setting aside money for bail. But, Oliver said, “More and more of these cases are being charged as felonies,” adding that “it’s reasonable to expect there will be an increasingly high bail set.”

The NLG is, therefore, urging people to contribute either their time or money. It has a website devoted to this, at nlg.org/occupy.

But more than just being on hand to post bail, the NLG is playing a central role in trying to bring to light the systemic police violence against people exercising their First Amendment rights. Oliver pointed to the first famous case of NYPD excess in OWS: Anthony Bologna, the commanding officer who was caught on tape pepper-spraying nonviolent female protesters. Police advocates have countered that these acts are isolated incidents and are dealt with internally, but Oliver sees it otherwise.
“There’s very little mechanism for accountability for the police who engage in that kind of violent conduct,” he told The Indypendent, noting that the commander’s punishment included docked vacation days and a transfer to Staten Island, where he resides. “It’s a reward, at the end of the day. At least with respect to the supervisors, Police Commissioner Ray Kelly has the backs of the other bosses who stick their necks out this way very consistently.” 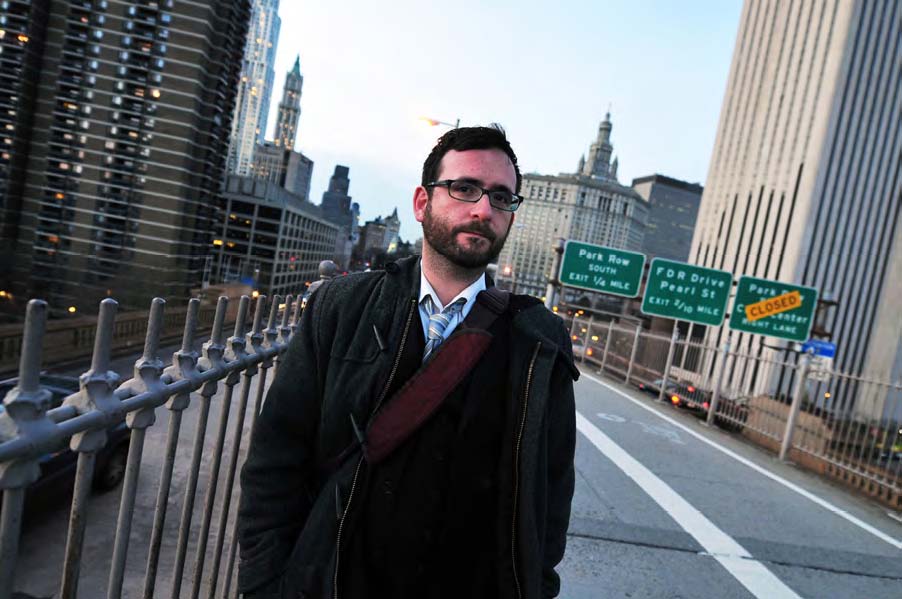 Oliver continued, “The Police Department is going back to a lot of the RNC-style kettling and crowd control tactics and using force in individual arrests and cases and using more pepper spray. …I think there’s been an escalation in response to Occupy Wall Street.”

OWS protesters are fighting back in the courts. More than 350 of the 700 people arrested for marching on the Brooklyn Bridge Oct. 1 are taking their cases to trial, arguing that police led them onto the bridge before carrying out a mass arrest.

While two city councilmembers have been violently arrested in the past several months — one of them during the eviction of OWS in Zuccotti Park in November — that body’s police oversight committee has never vigorously investigated aggressive tactics against protesters. (The committee is chaired by Peter Vallone, Jr., an outspoken NYPD advocate.)

Further, there is no real way to deal with NYPD overreach, despite the department’s own Internal Affairs Bureau (IAB) and the Civilian Complaint Review Board (CCRB). “It’s not like they’re apolitical,” Oliver said of the IAB. “The CCRB has no teeth in a sense because it doesn’t have the authority to punish officers. It can only make recommendations, so everybody knows at the end of the day, it’s going to end up in-house. That’s not really an effective accountability mechanism. Officers can eat a couple of CCRB decisions. It’s not the end of the world.”

The result is a dangerous one for democracy. “One of the reasons why the Police Department acts the way that it does is to chill people, to scare them from being on the streets by making it unpredictable on how you can stay safe,” Oliver said.

He added that the city’s unwillingness to confront excessive force and unjust arrests means the taxpayers have to pay the litigation costs and the settlements between the city and the victims in class-action lawsuits.

“We’re going to be paying for the police department’s behavior in 2004 for the RNC protest litigation for a long time,” Oliver said. “This is only repeating and in some ways escalating the same problems.”

Conspiring to use the First Amendment
New York is not the only city where the power of the legal system is being more zealously deployed against the Occupy movement.

In San Diego, police arrested four Occupy protesters Jan. 11 for heckling Mayor Jerry Sanders during his annual State of the City address and slapped each of them with a felony conspiracy charge. The felony charge increased the protesters’ bail from $500 to $10,000. They each face up to two years in jail if convicted. A police spokesperson told voicesofsandiego.org, that conspiracy charges had been applied because the four protesters had chanted from identical scripts.
—John Tarleton

National Lawyers Guild: A Short History
Founded in 1937 “to emphasize humanrights over property rights,” the National Lawyers Guild has provided legal support to just about every left-leaning protest movement over the past 75 years — from striking autoworkers in the 1930s to 1960s-era civil rights and antiwar activists to today’s Occupiers. NLG members also helped prosecute Nazis at the Nuremberg Trials, participated in drafting the 1948 Universal Declaration of Human Rights and pioneered storefront law offices for low-income clients, which became the model for the community-based offices of the Legal Services Corporation. With their clipboards and fluorescent green ballcaps , NLG legal observers are fixtures at protests in many cities. The organization currently has 4,000 members nationwide with 800 based in New York City. For more information, see nlg.org or nlgnyc.org.
— John Tarleton