The marble floor in Chicago City Hall vibrated as labor union members and other protesters stamped their feet and loudly chanted "Shame! Shame! Shame!" after the council overwhelmingly voted for two ordinances Wednesday related to police powers and protest restrictions in advance of the simultaneous G8 and NATO summits in Chicago in May. 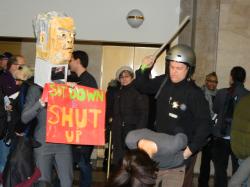 it an acceptable alternative. Changes included the elimination of increased fines for resisting arrest, and scaling back a requirement that all sound and recording equipment, signs and banners to be used by protesters be described in a parade permit application.

But opponents—including the labor-community coalition Stand Up Chicago! and members and leaders of SEIU Local 73, Jobs with Justice and other workers and grassroots groups—say the ordinances are still a serious attack on basic civil rights. Among other things, they allow the city to deputize police officers from outside Chicago for temporary duty, change the requirements for obtaining a protest permit and allow the city to enter into no-bid security contracts without city council approval. (The ordinances can be read here and here.)

They said it would make it especially hard for disabled and low-income people to exercise their rights to protest, and hence it will make it even harder for people to challenge city policies that disenfranchise low-income and African American communities, the disabled, the homeless and others who already feel they have been attacked by first-year Chicago Mayor Rahm Emanuel, who the movement has dubbed "Mayor One Percent."

Wayne Lindwall, Chicago division director for SEIU Local 73, told In These Times that the ordinance is a direct insult to labor unions and other groups that engage in peaceful protests. Along with civil rights issues, provisions for no-bid security contracts during protests are a major concern for labor unions and taxpayer watchdog groups.

"SEIU Local 73 is one of the oldest, most trusted public sector unions in the country," he said. "We don’t go out and break bottles and mess with the public. We are the public."

Protesters described the ordinance as just the latest in a series of attacks on working people since Emanuel took office, in many cases continuing or stepping up various initiatives started under former mayor Richard M. Daley. These include plans passed by City Council to close mental health clinics that serve the poor and privatize a range of services and public jobs, including at public health clinics.

Lindwall said the city’s move to privatize and eliminate SEIU jobs especially at O'Hare International Airport and public libraries will hurt the local economy and disproportionately minority communities, given the demographics of those workers.

He also described lay-offs of union traffic control aides and their union supervisors as a safety threat to workers and the public, especially since, he said, the laid-off supervisors were replaced with part-timers with less training.

Lindwall thinks the traffic control lay-offs will exacerbate tensions and security issues during the G8 summit, especially since the people laid off had longtime relationships with or were former members of the Chicago Police Department, while the newcomers do not have these ties.

Lindwall sees Emanuel’s actions as direct efforts at union-busting, particularly in light of the fact that, the union says, the salaries of custodians in positions slated for privatization at the airport are paid by the airlines and federal funds, not costing the city money.

"We think he’s trying to make good on his promises to outsource," Lindwall said. "He claimed to be so for labor…we really didn’t expect him to go after labor like this…but (now) we believe he’s really anti-union and all about his connections to big business…The mayor’s using the whole G8-NATO summit as a blank check to get what he wants and to muffle the sounds of labor."

As several opponents marched out of the City Council chambers announcing the results of the G8 ordinance vote, a crowd pressed up against cordons in the lobby began hissing, stomping and chanting phrases including "One term mayor, Rahm’s got to go, we just thought we’d let you know." They attempted to block the elevators as several were removed by police.

Protesters also staged a play of scenes they envision playing out during the G8: an actor with a large papier-mache Rahm Emanuel head overseeing a riot helmeted-cop beating seated protesters with hands bound in plastic cuffs. Protest signs proclaimed "RIP Bill of Rights: 1789-2012" and "Rahmageddon."

"I was deployed to the wrong war," said Iraq Veterans Against the War member Aaron Hughes at a press conference before the vote. "My fight is here at home for democracy and civil rights…Here we are seeing democracy erode, even as my brothers and sisters are sent to Iraq and Afghanistan to supposedly fight for democracy there."

Andy Thayer, a leader of the Coalition Against the NATO/G8 War & Poverty Agenda, which received a permit to protest the summits from the city last week, had stronger words earlier this week.

"If the ordinances pass tomorrow, all bets are off," Thayer said Tuesday during a press conference at city hall. If you cancel people's constitutional rights, the onus is on you for what happens."

Thayer wouldn't elaborate on exactly what he meant, but with the ordinances now passed, activists have about four months to plan protests during the international summits. For the first time since 1977, they are being held in the same city at the same time.