Wikipedia and Google blacked out? Redditers in an uproar? Thousands of geeks abandoning their cubicles to take to the streets?

Today's nationwide protest of Internet blacklist legislation is part of a brewing movement to keep control over the Internet out of the hands of corporations and governments. It's a struggle that puts Internet users before information gatekeepers. At stake is everyone's democratic right to information.

The movement owes its momentum to a recent sequence of events. In 2010 millions of Internet users became advocates in support of Net Neutrality protections. In 2011, the importance of digital freedom spilled out onto the streets as demonstrators with a mobile phones and a connection became a force in global protests.

Now, millions are rallying against two bills in Congress that allegedly protect intellectual property but go way too far, threatening to hold our free speech rights captive and stifle the creativity and innovation that's become a hallmark of the online community.

Over the weekend the White House succumbed to popular pressure and modified its position on the Stop Online Piracy Act (SOPA) and the Protect-IP Act (PIPA) saying it would not support any legislation that "reduces freedom of expression" or "undermines the dynamic, innovative global Internet."

The White House's change of heart gave one media tycoon fits. News Corporation Chairman Rupert Murdoch, who has been a staunch supporter of the most draconian curbs to Internet freedom, sent outrapid-fire series of tweets accusing President Obama of throwing in his lot with thieves, pirates andterrorists.

That Murdoch doesn't get the Internet shouldn't surprise anyone watching his recent efforts to control it. It's a campaign that goes well beyond Murdoch's MySpace miscalculation to include tens of millions of dollars spent on Washington lobbyists who are intent on passing laws to undermine the Internet's open architecture.

What's happening is that millions of people are joining to protest Murdoch and his ilk and protect our fundamental freedom to connect, link to and share information without censor or filter.

This open Internet movement is the natural outgrowth of a network that was conceived upon a principle of non-discrimination — a network engineering ideal that had profound ramifications for democracy. According to one of its founders, Sir Tim Berners Lee, the Internet's original architecture was guided by a powerful concept: "that any person could share information with anyone else, anywhere. In this spirit, the Web spread quickly from the grassroots up."

Indeed, the open web evolved to become an indispensable organizing tool of social movements worldwide. It's no surprise then that the Internet would soon have a movement all its own. 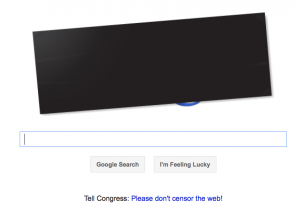 Today's Web blackouts are its latest face, but the movement dates far back to the earlier days of the popular Internet — about eight years ago — when powerful phone and cable companies began to talk up ways they could control network traffic. Those words gave birth to Net Neutrality advocacy and engaged millions in efforts to stop industry efforts to filter or block content.

It also has antecedents in the backlash to web censorship by China and other repressive regimes. The blocking of online content from Beijing to Cairo only served to highlight the Internet's vital role in democracy movements and galvanize global efforts to pierce official firewalls and protect online activists.

And the movement has grown out of an open source community that believes decades of Luddite copyright legislation have stifled, not fostered, the online creativity and innovation that's essential to growth and prosperity.

In truth, the principles behind the open Internet movement go back much further, to the First Amendment, which was written to protect the sort of popular exchange of ideas that is the lifeblood of any democracy.

While America's founding fathers likely could not have imagined a technology that would put the power of the mass media into the hands of millions, they understood that, in the words of James Madison, a democracy must allow people to "arm themselves with the power knowledge gives."

The open Internet is the means to this power. The movement to protect it has found a voice in the millions of people who are taking action today. And the implications should be clear to any person, government or corporation that thinks it can harm our network without a fight.

This article was originally published by Save the Internet and Common Dreams.