Inequality is a disease of society, a cancer growing out of control at one end of the body while the rest of it withers away.

It's not just about the money, although income and wealth inequality have never been worse in the United States. It's also the pathological adherence to free market principles that have not worked for most of the country. And a bizarre idolization of the 'innovators' who have rigged the financial system in their favor.

High-priced schemers and swindlers and scoundrels roam free on Wall Street, while the downtrodden are condemned for trying to survive. "If you steal $10 from a man's wallet," observed former Secretary of the Interior Walter Hickel, "you're likely to get into a fight, but if you steal billions from the the commons, co-owned by him and his descendants, he may not even notice."

— Leandro Andrade is serving a life sentence in California for stealing five videotapes from a K-Mart. He was convicted under the state's three strikes law, after convictions for petty theft, burglary, and possession of marijuana. Justice David Souter noted that Andrade "committed theft of trifling value…with no violent crimes against the person." 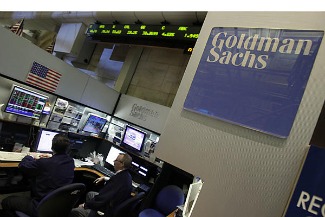 for either of them. They spent 17 years in jail.

— As of 2003 in California there were 344 individuals serving sentences of 25 years or more for shoplifting as a third offense, in many cases after two non-violent offenses.

If you steal billions from the commons…

— The savings and loan fraud cost the nation between $300 billion and $500 billion, about 100 times more than the total cost of burglaries in 2010. The financial system bailout has already cost the country $3 trillion.

— Goldman Sachs packaged bad debt, sold it under a different name, persuaded ratings services to label it AAA, and then bet against it by selling it short. Other firms accused of fraud and insider trading were Morgan Stanley, Bear Stearns, Bank of America, Countrywide Financial, and Wells Fargo.

— The New York Times reported in 2008 that the Justice Department had postponed the bribery or fraud prosecutions of over 50 corporations, choosing instead to enter into agreements involving fines and 'monitoring' periods.

America is suffering from a "pathology of inequality," a term coined by Chilean economist Fernando Fajnzylber with regard to third-world Latin American countries that seemed autocratic and poverty-stricken at the time, but many of whom are now less unequal than the United States.

One percent of our body doesn't feel the pain. American Psychological Association research indicates that wealthier people "may just not be as adept at recognizing the cues and signals of suffering because they haven't had to deal with as many obstacles in their lives."

As the body gets sicker, thinking becomes incoherent:

"The financial system led us into the crisis and it will lead us out." — Goldman Sachs chairman Lloyd Blankfein. "Western-style private enterprise…will lead the world out of the mess it led the world into." — Chicago Tribune. "If capitalism is perceived to not be working in America…it's because the system isn't capitalist enough." — Rachel Marsden

And dementia sets in.