The day after the Obama administration rejected a proposal for the Keystone XL tar sands pipeline — a move widely, if cautiously, applauded by environmental groups and advocates of renewable energy — a new report highlights the destructive impact of fossil fuel consumption in the United States. The report, called Fueling Extinction: How Dirty Energy Drives Wildlife to the Brink, highlights the top 10 US species whose survival is most threatened by the development, extraction, transportation, and consumption of fossil fuels.

Generated by a coalition of environmental and conservation groups, the report looks at the impact of the coal, natural gas, and oil industries and asks the fundamental question: "What have we gained from our nation's unquenchable appetite for fossil fuels?" Coalition members nominated species for inclusion in the report; submissions were then reviewed, judged and voted on by a panel of scientists. The report identifies the home range, conservation status, remaining population and specific threat facing each of the 10 finalists.

“America’s outsized reliance on dirty and dangerous fuels is making it much harder to protect our most vulnerable wildlife,” said Mark Salvo with coalition member WildEarth Guardians, said in a statement. “We should not sacrifice our irreplaceable natural heritage in order to make the fossil fuels industry even wealthier.”

The report itself does not shy away from pointing its finger directly at the profit-driven aspect of the fossil fuel industry, nor its dependence on taxpayer-funded subsidies:

The oil and gas industry is subsidized with huge tax breaks and numerous loopholes. Taxpayers will hand out nearly $100 billion to oil and gas companies in the coming decades.

The myth that we can lower gas prices with our own oil reserves has been disproved time and again. It is a well-known fact that the United States uses about 22% of the world’s oil, but we sit on only 1.5% of proven oil reserves. […] 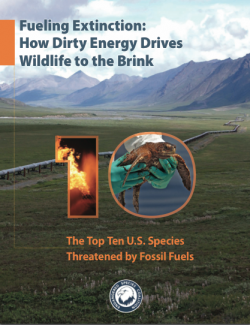 The American people are clearly getting the short end of the stick from the fossil fuel industry, both in terms of jobs and in preserving our natural heritage.

The oil, gas and coal industries pour millions into campaign coffers, and some members of Congress have benefited greatly from this largesse. We should not sacrifice our irreplaceable natural resources in order to make politicians and oil companies rich.

The animals (and one plant) highlighted by the group range from the relatively unknown and small Tan Riffleshell, a freshwater mussel found in only five rivers in the eastern US, to the large and majestic Bowhead Whale, believed to be among the oldest mammals on earth and the only whale that lives exclusively in arctic waters.  The other eight species examined in the report include: the Dunes Sagebrush Lizard, the Graham’s Penstemon (a wildflower), the Greater Sage Grouse, the Kemp’s Ridley Sea Turtle, the Kentucky Arrow Darter, the Spectacled Eider, the Whooping Crane, and the Wyoming Pocket Gopher. Receiving the 'activist's choice award' from the voting members was the Polar Bear, chosen because it was "the species they were most concerned about."

Each species was given a section of the report where information was provided on its range, conservation status, remaining population, general background, and how it was specifically threatened by fossil fuel development.  Of course, each species' circumstances are different, but looked at from above, the stories are the same: fragile ecosystems destroyed in the name of US "energy security" or sacrificed at the altar of US consumer demand.

Whether or oil exploration in the arctic (Bowhead Whale and Polar Bear), mountaintop removal and coal mining in Appalachia (Kentucky Arrow Darter and Tan Riffleshell), tar sands extraction in the US West and Canada (Whooping Crane and Wyoming Pocket Gopher), or western shale oil and gas development (Graham's Pentsemon and Sagebrush Lizard), the pattern holds. "These diverse species all have at least one thing in common," writes Mitch Merry at the Stop Extinction blog. "They're being driven closer to the edge of extinction by our nation's continued reliance on energy sources produced in the age of dinosaurs."

The Public News Service interviewed wildlife biologist Jan Randall, a professor emeritus at San Francisco State University who contributed to the report, who said, "Coal, all the oil exploration, development, transportation, the spills, and now there's the shale oil, and then you get into the fracking. We're paying a huge environmental cost."