An estimated 36,000 post-secondary students in Quebec have left their classrooms for strikes planned in response to proposed tuition-fee hikes. The Charest government plans to double tuition (the current $2,200 fee will rise to $3,800 over the next five years).

Montreal police arrested 37 people last week after the protesters occupied a downtown college, and it appears as though the police are escalating actions against the students. CBC posted a photo of police using pepper spray to disperse a crowd blocking the Delta hotel during a demonstration on Thursday. Riot police were brought in to suppress a group of people responsible for smashing furniture and windows and spraying graffiti.

While the striking students represent less than 10 percent of all Quebec students, their numbers have dramatically grown in the past few days.

"In just one week, the strike has more than tripled," said Jeanne Reynolds, a spokeswoman for the CLASSE coalition.

"The (government) now has no choice but to take our strike seriously. If it does not (act) quickly, the Quebec education system will paralyzed even more."

Thus far, Charest has shown no sign of budging.

He called his government's policy "fair" and well-thought-out, following consultations held over a number of years. Charest added that bursaries and loans would increase in order to guarantee student access, as part of a broader series of measures to increase funding for Quebec universities.

Of course, as in the United States, loan interest rates could crush Quebec students who use them, and Charest's "solution" will surely be a bitter pill to swallow for any student who imagined they might complete their university years loan-free. 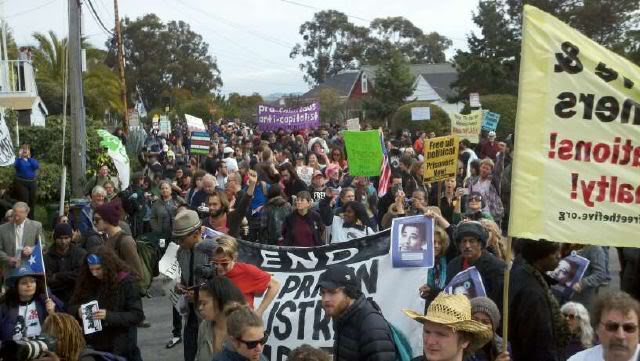 Occupy 4 Prisoners said the estimated 700 demonstrators who showed up for the protest Sunday afternoon want the elimination of solitary confinement, a ban on the death penalty, and an end to California's Three Strikes law.

The San Francisco Chronicle reports that San Quentin was placed on lockdown in anticipation of the protest.

Activists say that, while it's important Occupy Wall Street focuses on the actions of the top one percent, they shouldn't forget about the existence of the bottom one percent.

Activist Barbara Becnel said prisoners were drawing inspiration from the Occupy movement, which spread across the country last autumn with calls for greater economic equality. The movement has lost ground as many U.S. cities evicted protesters from their tent camps.

“We have merged the prison rights movement with the Occupy movement,” Becnel said, quoting a message she said came from San Quentin death row prisoner Kevin Cooper. “The 99 percent has to be concerned about the bottom 1 percent.”

The California penal system has long been the target of widespread criticism for its inhumane living conditions, but especially this week when a 27-year-old convicted murderer died while on a hunger strike to protest restrictions on access to health, good food, legal services, among other amenities.

Christian Alexander Gomez died on February 2, six days after he and 31 other inmates in the Corcoran State Prison’s administrative segregation unit began refusing food, said Terry Thornton, a spokeswoman for the California Department of Corrections and Rehabilitation.

At least 4,000 prisoners participated in the strikes at their height in October, according to prison officials, but advocates put the figure higher at up to 12,000.

Shaw further explains why he chose to return to San Quentin and protest. He talks about the "dehumanizing" conditions in prison, including how guards don't permit the other prisoners to look at death row inmates as they're transferred.