The Nuclear Regulatory Commission’s (NRC) approval today of a proposal for the construction and operation of two new reactors in Georgia is a move in the wrong direction. The license granted to Southern Company is the first in 30 years and comes nearly one year after an earthquake initiated a still-uncontained nuclear crisis in Japan.

Nuclear development in the U.S. has been dormant for decades for a variety of good reasons, so it is inexplicable that we’ve chosen this moment in history to expand the use of a failed and dangerous technology.

To cement their shared national business interests, the two leaders are expected to agree joint deals worth £500 million between British companies and French state-owned nuclear giants EDF and Areva.

EDF is building a new generation of nuclear power plants in Britain and Mr Cameron is anxious that the French companies uses British contractors like Rolls Royce, Keir and BAM Nuttall.

The emphasis on building nuclear plants isn't popular with many in both countries, the BBC explains:

Nuclear power is used to generate about three-quarters of France's electricity, but Doug Parr of Greenpeace said it was "no longer popular" in the country.

"No amount of talking up of the French nuclear industry by David Cameron and Nicolas Sarkozy will cover up the fact that the economics of new nuclear reactors don't stack up.

''So instead of using UK taxpayers' money to prop up failing French industries, David Cameron should follow the lead of Germany and concentrate on securing vast numbers of jobs and economic growth in the rapidly expanding clean energy industries such as wind and solar power."

The Associated Press reports that residents in China are becoming increasingly vocal against their government's plan to move forward with increased nuclear power.

Despite widespread public concern over possible radiation contamination from the disaster and calls for improved safety precautions and emergency preparedness, China remains committed to building up nuclear power to help reduce emissions from coal-fired power plants and curb its reliance on costly oil imports.

China currently has 13 nuclear reactors that provide about 10 gigawatts of generating capacity and plans call for expanding that to about 40 gigawatts by 2015. […]

Although the government has generally pushed ahead with whatever infrastructure projects it wants, the Chinese public is becoming increasingly vocal in its concerns over potential environmental risks or other disruptions.

Associated Press continues saying that a new plant in the town of Pengze on the Yangtze River in Jiangxi province has sparked tremendous outrage from residents of neighboring town who are petitioning to have the plans for the plant canceled. 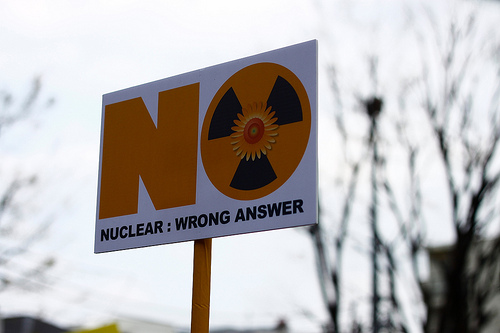 Worries Over Fukushima-style Nuclear Power Plants in the U.S.

In addition to outcry over new plants being built, serious concerns hover over the General Electric-made nuclear plant design known as Mark I, the design of over 20 nuclear plants in the U.S., also the design of the Fukushima Daiichi nuclear power plant.  A CNN report today details how the design similarity is sparking concerns:

[C]oncerns about the Mark I's ability to contain the consequences of a severe accident have been raised for decades, and critics say the Fukushima Daiichi accident shows it can't survive a real-world disaster.[…]

Arnie Gundersen, a former nuclear engineer and a leading critic of the Vermont Yankee plant, says the Japanese accident shows the Mark I containment system can't prevent a release of radioactivity in a meltdown.

In an October hearing before the NRC's Petition Review Board, he said the [vent system change in 1989 to release steam during an emergency was] a "Band-Aid fix" for the design that failed "not once, not twice, but three times" at Fukushima Daiichi.

"True wisdom means knowing when to modify something and knowing when to stop," said Gundersen, who leads a state commission set up to monitor the Vermont Yankee plant.[…]

GE says it has made several changes to the Mark I design since 1980 aimed at improving safety in the event of an accident. The manufacturer, which has a partnership with Japanese industrial giant Hitachi, stands by its product and says the tsunami that struck Fukushima Daiichi would have devastated any plant.