This year promises to be another historic year of people calling for change worldwide. Citizens took to the streets for a wide variety of reasons, from the Wisconsin Capitol to D.C., which hosted many actions last year including the highly visible civil disobedience of activists seeking to halt the proposed Keystone XL Pipeline. The resulting mass arrests, totaling over 1,200 by early September, surely played a large role in President Obama’s decision to delay approval of that climate- and water supply-threatening project.

The climate justice movement also experienced a low point this year, though, when its most visible young leader, Tim DeChristopher, was sentenced to two years in prison for disrupting a Federal oil and gas lease auction by peaceful means. Even though the auction was later shown to be illegal, DeChristopher’s case proceeded in a manner that made it clear that the government’s prosecutor sought to make an example of an activist who showed no remorse. 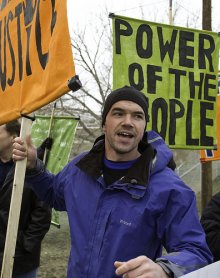 For his part, Tim saw it as a necessary action to protect his future from runaway climate change, and seemed ready to prove that his movement is unafraid of such retribution when he refused to apologize or take a plea deal. As he told Terry Tempest Williams in Orion recently, “…it’s important to make sure that the government doesn’t win in their quest to intimidate people…They’re trying to make an example out of me to scare other people into obedience.” The punishing of protest is not unusual, and can result in long-term victories for those targeted, but that didn’t comfort Patrick Shea, DeChristopher’s lawyer, who said in a recent post that he’d witnessed “a miscarriage of justice, fairness, and what I believed America stood for.”

Occupiers, though, have racked up many more detentions, with 6,526 arrested in 110 U.S. cities so far, according to OccupyArrests.com. This wave of action and reaction has kept National Lawyers Guild (NLG) chapters and members very busy working to protect demonstrators’ constitutional rights. Founded 75 years ago to use the law to advance social justice and support progressive social movements, NLG coordinates attorneys, legal workers and law students, and provides legal briefing, case law research, legal strategy and tactical advice to activists. Over the past several months, its members have filed constitutional rights challenges, represented protesters in criminal court, trained and acted as Legal Observers®, and often provided ‘round-the-clock legal advice to Occupy encampments.

Their director, Heidi Boghosian, told me that guild members “…have probably pulled more all-nighters in the past few months than they did in all of college. But we hope that the Occupy movement continues, in as many creative incarnations as possible. For most of us, this kind of grassroots activism is what we live for.”

So I asked Boghosian this weekend how her view of the hierarchy of governmental threats to the exercise of political speech described in her 2007 book, Punishing Protest, has changed. She responded that two new significant trends are evident: “One, the use of high-technology and sophisticated military equipment, and two, cooperation between law enforcement and the private business sector, especially with regard to surveillance/spying and controlling media access to police actions.”

In some cities, such as New York, she said, “police are scanning irises of arrestees and are detaining those who refuse to be scanned. The stated purpose of the scans is to avoid mis-identifications in court, but this unregulated taking from those arrested for engaging in free speech activities is ominous; it would not be surprising if a database is being amassed of iris scans of political activists.” 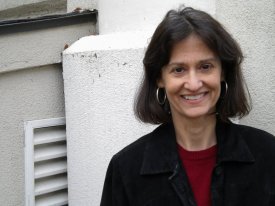 .In addition to police in Washington, D.C. using a truck with an infrared scanner to determine if individuals were sleeping at McPherson Square after they cleared tents from the Occupy encampment, other high-tech threats exist: “The federal government and local police agencies are using Predator drones with increasing frequency to spy on suspects domestically. The drones are equipped with high-resolution cameras, heat sensors and radar—it does not take much stretch of the imagination to see how the drones can be adapted for spying on political activists. These aircraft are capable of flying for up to 20 hours, making them more powerful than police airplanes or helicopters.”

Beside the high-tech threats, local governments preparing for large-scale protests before the political conventions are bolstering their standard toolbox with military equipment such as armed tanks. “The Tampa City Council voted to spend part of the federal grant money for the 2012 Republican National Convention— $50 million – for police “upgrades,” including a Lenco BearCat armored vehicle to supplement two older armored vehicles the city purchased through a military surplus program,” Boghosian said.

“Partnerships between law enforcement and corporations, including the news media, are cropping up with increasing frequency,” she continued. “Routinely, police shut down entire city blocks sweeping up everyone in sight, and control or prohibit credentialed journalists’ access during the process. That happened in New York when members of the press were kept away from a middle-of-the-night closing of Zuccotti Park, and in Los Angeles in late November when the LAPD shut down Occupy Los Angeles.” Boghosian noted in this case that, “Reports indicated that television news helicopters stopped sending images of officers marching toward City Hall because the news station entered into an agreement with the LAPD to not reveal their plans. The police imposed an air space blackout forbidding all but law enforcement helicopters to film above Solidarity Park.”

How much is the government reaction to Occupy changing how dissent is policed, I wondered? Boghosian answered that police have access to technology to monitor protesters in ways not previously possible. Besides facial recognition, Internet data mining, and even drones, “…a high technology facility is planned for lower Manhattan, where Wall Street businesses will cooperate with the New York Police Department in spying on citizens. NYPD Commissioner Raymond Kelly expressed the department’s commitment to implementing a security plan that will include a centralized coordination center with space for full-time representation from Goldman Sachs and other corporate partners.”

Then there’s the Manhattan District Attorney’s office, which issued a subpoena asking for three months of information from a Twitter account of a person arrested in the ‘trap-and-arrest’ of Occupy Wall Street marchers on the Brooklyn Bridge. The defense attorney, NLG member Martin Stolar, filed a motion to quash the subpoena contending that it was overbroad, was issued for an improper purpose, and constituted an abuse of the court process. He also wrote that the range of information requested suggested that the DA might be using the subpoena for investigative purposes rather than to provide evidence to uphold a charge of disorderly conduct.

Police also dealt a blow to using new media to cover protest actions when they raided the Brooklyn studio of Globalrevolution.tv, a website that aggregates live streaming content on the Occupy movement and arrested six of its volunteers. “Police had delivered a notice to vacate prior to the raid. Authorities claimed that the conditions in the space were perilous to life,” Boghosian noted drily.

Combine these developments with the new National Defense Authorization Act, (a broad and likely unconstitutional new law described by Glenn Greenwald as “…the first time indefinite detention has been enshrined in law since the McCarthy era of the 1950s,”) and one sees a broad and robust reaction to what Time magazine dubbed “the year of the protester.”

To the NLG’s Boghosian, not only is the NDAA unconstitutional, but also immoral and inhumane. The provisions on indefinite detention clearly violate due process and it overall “turns international humanitarian law on its head by mocking the concept that prisoners of war may be detained only until the end of hostilities,” she said. “As propaganda about radical Islam replace communism in the United States government’s rubric of fear, the executive branch abrogates any semblance of democracy. It was important that Chris Hedges brought his legal challenge to hold our leaders accountable and to propel critical issues into the public forum. I hope that he has a chance at prevailing and urge more citizens to bring such challenges to unlawful government actions. They may not like to let on, but judges read the newspapers. The silver lining in this is that the NDAA formalizes the many illegal practices already occurring, allowing formal challenges to be brought against them.”

From the multiple Occupy encampments to the climate camps on mountaintops in Appalachia to the one outside the courthouse in Utah where Tim DeChristopher took his defiant stand, all of the developments in how dissent is policed forces one to wonder whether the U.S. Justice System is actually about justice. Louis Wolcher, Professor of Law at University of Washington School of Law, told me that the term ‘justice system’ actually “…conflates law with justice, whereas the word justice means far more than law, as does the word ethics.” NLG’s Boghosian added that justice is also about politics, in that politics trumps justice and laws in most cases. “It takes a brave judge, and morally courageous lawyers, to stand up and make the just and legal decision in the face of the dominant political paradigm.”

What the justice system is actually for is a huge question, one that must be answered by the legions of activists, lawyers, and citizens who want to ensure a more transparent, just, equitable, and sustainable society. In the absence of such a response, the exercise of free speech in the U.S. will be increasingly constrained.