Last Thursday, people across Spain made a show of force in a general strike, at a scale ranging from the government estimate of 800,000 to the 4 million claimed by the unions. It was timed to challenge new reforms that are expected to make it easier for employers to fire workers, dealing a blow to organized labor.

The 15M movement, which began with occupations in the central squares of cities around the country last year, played an important role in the strike’s success. Despite ongoing conflicts between the largest unions and 15M, several weeks ago the movement’s key organizations — including neighborhood assemblies, Democracia Real Ya, Yo No Pago and the Platform of People Affected by the Mortgage (PAH) — announced their support for the general strike and started working to make it a success.

Early on, there appeared an anonymous blog called 29M sin Miedo (M29 without Fear). It invited workers to speak out against intimidation from their companies about the prospect of the strike, such as threats of dismissal or demands for signed statements about whether they intended to strike or not. The blog, which collected as many as 250 complaints, achieved a double objective: it made these abusive practices visible, and it provided a list of companies to picket on the day of the strike.

The 15M movement’s collectives followed suit with their own initiatives, including leafleting, public meetings about the overhaul of labor rules, caceroladas (the banging of pots and pans) and bicycle pickets. In Barcelona, these were organized through the Acampada BCN website and, in Madrid, through Toma la Huelga (Take the Strike). On Toma la Huelga, too, an independent media team covered the general strike, documenting the movement’s actions minute by minute. This became one of the movement’s major victories that day; Toma la Huelga received more than 150,000 visits, finally prompting RTVE, the Spanish public TV channel, to turn to those working on the site for information. 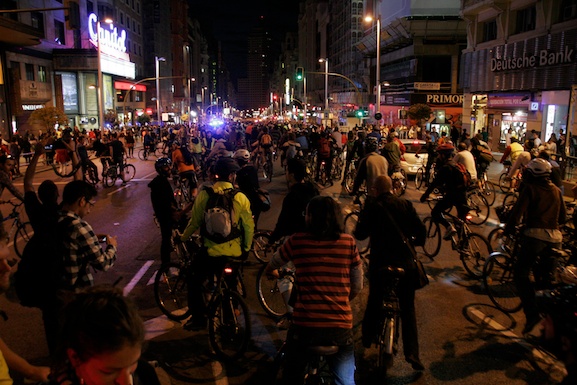 A bicycle picket in Madrid, via the FotogrAccion collective.

Although the main Spanish newspapers tended to credit the large unions alone, people from 15M played an important role throughout the strike. The night before, in fact, various neighborhood assemblies began picket lines at night spots and transportation centers. By 8 a.m., the picketers were out again and moved through Spain’s main cities all day long, often blocking street traffic.

In most cities, the 15M movement organized their own demonstrations or joined the calls of the smaller unions. In Madrid, at 4:30 in the afternoon, people from the neighborhood assemblies went to centrally-located Cibeles Square and practiced a favorite Spanish pastime: the siesta. Nearly 500 people spent the evening there, enjoying the good weather and causing the area to be closed to traffic for hours. Afterward, several thousand marched to Sol square, followed by the demonstration of the main unions. In this strike, as in other protests before it, 15M and the unions are both in the streets, but it doesn’t mean they get along. 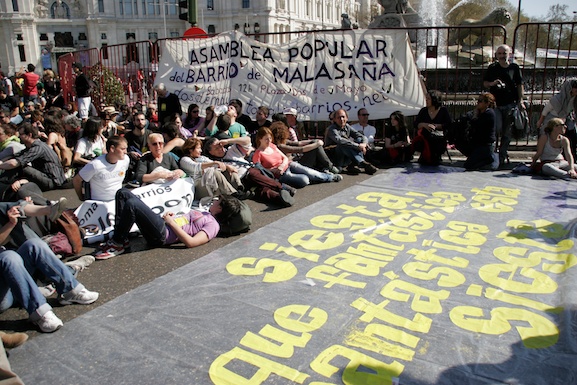 Siesta in Madrid during the general strike, via the FotogrAccion collective.

The day was generally peaceful, but there were some episodes of violence, especially as police cracked down on 15M actions. Before the strike, the government announced that it had prepared a large police force “in anticipation of the picket lines organized by the movement.” In the end, 176 people were arrested, along with more than a hundred injuries. Police repression started the night before, when the 15M picket lines in Madrid arrived at Santa Ana, a square in the city center where foreigners go for the nightlife. The first police charge was there at about 1:30 a.m., with five arrested and several injuries.

Violence was especially notable in Barcelona, where police used rubber bullets and tear gas against thousands of demonstrators in Plaza Catalunya, the same place where Barcelona’s encampment was evicted at the end of May, leaving hundreds injured in one of the most violent episodes of the 15M movement. By evening, some demonstrators responded to the police violence by burning containers, tires, bank offices and Starbucks stores. In Paseo de Gracia, one of the main streets in Barcelona, several hundred demonstrators tried to drive the police away. This fed a media portrayal of the movement as violent and has become an excuse for the government of Catalonia to announce an “anti-guerrilla” plan that would further limit the rights of demonstrators — though the details of it are not yet clear. The use of tear gas against protests is not common in Spain, for instance, but this may change; last December, the Spanish government purchased a $2 million supply of it.

Despite a large turnout for the general strike, the government has already made clear that the proposed labor reforms will go forward. This doesn’t come as a surprise to the 15M movement, which saw value in showing discontent in the streets but didn’t expect the government to alter course. The movement still sees its main objective for now as working locally in neighborhoods to create a system outside the system.

Meanwhile, the main unions have said that they will give the government a month to change its posture. If it does not change, they have threatened a new mobilization in May — a month that will already be full of actions organized by the 15M movement. Once again, these two factions may run into each other in the streets.