People who haven’t gone through the financial aid process (recently or at all) might think of financial aid as mostly about grants or scholarships. Financial aid, however, comes largely in the form of federal loans, which a student must pay regardless of whether they complete their degree or not. Grants and scholarships are awarded, but they have not kept pace with the rising costs of education. The average Pell Grant, for example, has increased from $929 in 1979 to $3,706 in 2009 — a near 300% increase. This may sound like a lot but not when compared to the 548%, 807% and 620% increases in average annual tuition for (respectively) a 2-year, 4-year public and 4-year private college.

There is evidence to suggest that there has been a significant shift away from the ‘need-based’ philosophy of Pell Grants: the much more rapid growth of non-need-based aid like student loans, as shown in the graph, or the expansion of tax credits, which tend to disproportionately benefit middle- and upper-income families. As a result, according to the Federal Reserve Bank of New York, the average outstanding student loan balance per borrower is $23,300. 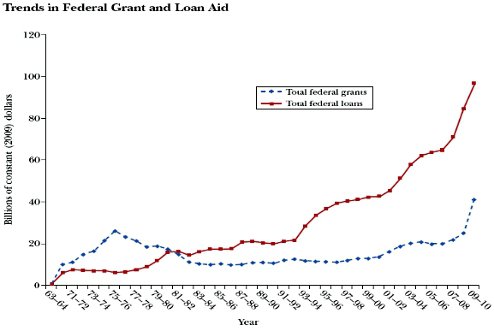 This means students from low-income families are not getting the help they need with funding their educations. (CEPR recently looked at the increase in the financial burden facing minimum-wage workers paying for college.) In fact, unmet need (i.e. expenses after expected family contribution and grant aid) of enrolled students averages 72% of family income (2007 dollars) for families in the lowest income quintile, versus 14% for those in the top quintile. In a recent report by the Education Trust of 1,186 four year colleges and universities, some 275 institutions required low-income students to pay more than 100% of family income.

Further, the total value of student loans is increasing. In a recent journal article, Christopher Avery and Sarah Turner find that this rise in outstanding loans reflects higher enrollment; however as shown in the table below, they also show an increase in the proportion of students taking on loansoans to meet gaps in financing. Also worrying is that the proportion is increasing more rapidly among students who are dependent on their parents, meaning these loans may not just be affecting them, but also their families. What is worse, in the 2007-08 academic year, 88 percent of students in for-profit institutions held student loans. These institutions have large shares of low-income students as they obtain the largest portions of their total revenue from need-based aid.

Postsecondary education can increase earnings potential and prospects for upward mobility. But financing that education can weigh heavily on a student’s decision to pursue it, particularly a low-income student. With the increasing rates of borrowing and tuition hikes, this option and its benefits may become increasingly unviable for many.

This article was originally published by CEPR.