On April 28, 2012, women and men gathered at events all over the United States. Their mission: to unite against the war on women.

In the wee hours of a February night, Karen Teegarden from Michigan and Desiree Jordan from New York were on the phone, venting to each other about the attacks on women's rights in government and media. They said something we've all said at one time or another, "We should do something about this! Take to the streets!"

This time, instead of going back to their daily lives, they followed through. In the course of 10 weeks what started as a late night conversation between friends developed into a movement spanning the country. According to www.unitewomen.org, there were marches and rallies happening in over 40 states and solidarity rallies in other countries as well.

I attended the march and rally in New York City. We gathered at the site of the Triangle Shirtwaist fire. There were roughly 100 people, spanning a large diversity. People of all genders, sexual identities, races, religions, ages and physical abilities–it was amazing.

From there, we marched down Broadway to Foley Square. 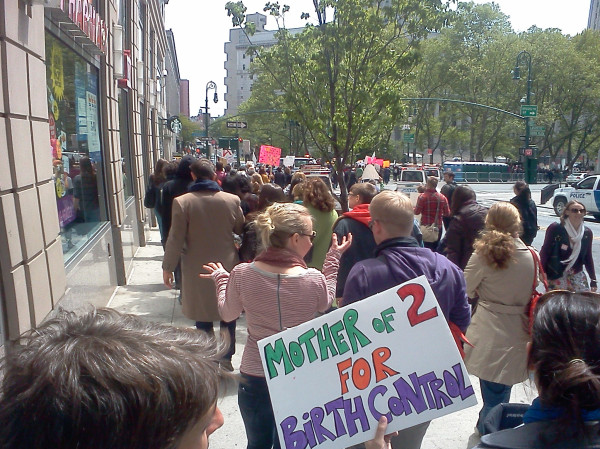 The signs people made for the rally told the story of why they had come out to fight against the war on women. "Mother of 2 for birth control," "Birth control addicted whores, sluts and b****es vote, too!" A 12 year old girl whose sign said "Equality for my FUTURE!" There wasn't a whole lot of chanting, but among the most popular was "not the church, not the state, women must decide their fate!" I'm not much of a chanter, but I liked that one a lot.

At Foley Sq., we met our host for the event, Leighann Lord, a stand-up comedian, who kept the mood light and the program running smoothly.  Assemblyperson Gottfried and Representative Jerry Nadler spoke about what they're doing to support all women regardless of race, legal status or economic status. Author Erica Jong spoke about the importance of free public education for the advancement of the 99% as a whole, as well as women. Reverend Matthew Westfox of the Religious Coalition for Reproductive Choice was a pleasant surprise for me. He spoke about his outrage at the blasphemy committed every day by people who use God's name to oppress women.

By far, my favorite speakers were Representative Carolyn Maloney and actress Martha Plimpton. Rep. Maloney was the woman who sort of started it all. She walked out of a House oversight committee hearing on the contraceptive coverage rule because it was all male and Democrats were not allowed to be represented on the panel. She stood outside and asked the fateful question, "Where are the women?" At the rally, she said she was happy to see us all out fighting for women's rights but that it wasn't enough. We have to remember in November.

Martha Plimpton, who was also selling scarlet A's to fundraise on behalf of www.aisfor.org, spoke to the crowd about the context of this newest war on women, using statistic to highlight her point. She explained how 1 in 3 women will be assaulted in her lifetime. In the just this past year, there have been over 100 anti-women's rights bills proposed. Corporations, Plimpton told the crowd, now have more rights as people than women. She also pointed out that it's easier to attack women's rights than it is to fix the economy and create jobs.

I left the rally feeling inspired and exhausted. It's tiring to constantly be forced to fight for equality and still not have it (we still only make 77 cents for every dollar a man makes, we are the majority in this country at 52% but still only hold 17% of seats in Congress). However, it inspiring to see so many different people come out to support us. There is another, national rally in D.C. in September. Hopefully more will come out in the streets to show their support as we start to understand that women's rights are human rights.