On May Day, Occupy Wall Street is supporting calls for a general strike. This in itself involves a lot of no’s: no work, no school, no housework, no banking, no shopping. To participate in the strike means withdrawing our consent from an oppressive system by refusing to make our individual contributions to economic production and weakening the dominance of capitalist exploitation. But what do we say “yes” to on May Day? What is the alternative to obtaining our basic needs for life — such as food, clothing, shelter, health, education and fun — if we no longer wish to rely on institutions like Monsanto, Pfizer, Harvard University, LiveNation and the U.S. government to provide them?

Mutual aid is the voluntary exchange of goods and services in a way that is mutually beneficial. Generally, these exchanges do not include money. Mutual aid is an economy based on cooperation and support, not competition and manipulation. Capitalism has manufactured a sense of false scarcity; scarcity for food, jobs, college-admission spots and housing. The reality is that a small number of individuals — ahem, the 1 percent — horde wealth, power and access, while everyone else is left to compete over the scraps. This dynamic results in poor-on-poor crimes, self-blame, and extreme individualism. And while charity may provide immediate aid to people in need, it is disempowering for those on the receiving end, and it does not confront the root issues of inequality.

Mutual aid has been utilized by many societies throughout human history. Because it was understood in these cultures that the survival and health of the group was integral to that of every individual, unchecked greed and unawareness of suffering were less prevalent. Survival used to be tied to the land, not to a minimum wage. It wasn’t until the privatization of land and production that people became forced to pay, and often to go into debt, just to have the means to support themselves. It does not have remain this way. Practicing mutual aid allows us to break away from our society’s fatally skewed conception of what is valuable, prioritizing instead strong relationships, healthy living and direct democracy.

Since January, the Mutual Aid Cluster in Occupy Wall Street’s May Day planning committee has been preparing for and coordinating mutual aid for those participating on May 1. Much as in occupied Liberty Square, we will be creating a vibrant space for people to share their knowledge, resources and services. While our comrades are shutting down Midtown and blockading arteries into New York City that day, our direct action will be coordinating mutual aid in Bryant Park and Union Square. In Bryant Park, we’ll be supporting those taking part in the morning and afternoon actions with food and art, along with medical and legal support. We will also be hosting skill shares and workshops. In Union Square, we will be doing all of the above, in addition to a Really, Really Free Market (RRFM), which is a community event where people can bring reusable goods that they no longer need and take what they do need. In this way, clothes, books, toys, skills, tools and small furniture are shared, along with entertainment 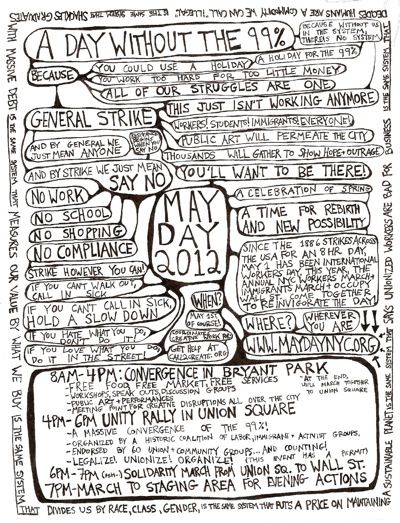 that is free to anyone who wishes to join in the celebration of a gift economy. Really, Really Free Markets have been organized all across the country and are easy to set up in your neighborhood; just pick a place and time and get the word out.

A major focus of May Day will be the Free University, which has been coordinated by college students throughout the city. They will be standing in solidarity with students from around the country and the world who are struggling for free or lower-cost education. Education is a human right, but more and more colleges and universities are raising tuition, closing off access and slashing workers’ jobs. The students in New York have been organizing for massive student walk-outs on May Day that will converge in Madison Square Park for an afternoon of free classes provided by college professors, which anyone can join.

You might not know it, but mutual aid is already part of your everyday life. Family members — both chosen and biological — take care of each other when one is sick, watch each other’s children and pets, and help with household projects. Friends share food and favorite books. Couch-surfers allow strangers to stay on their couches when they travel and then go off to adventure themselves, knowing that they will have a place to rest and a new friend at their next destination. Hitchhiking gets people to from state to state in exchange for stories and songs. Neighbors share recipes and tools. And let’s not forget that good consensual sex can be a form of mutual aid, too!

Although it is impossible to operate fully outside of globalized capitalism today, communities can prefigure a new world by building liberating alternatives through new and existing  relationships and support networks. Many of our most organically formed communities — like neighborhoods and workplaces — have been broken down due to the isolation that capitalism fosters. The Internet, advertisements, television, drugs and other forms of diversion keep us consuming and not questioning. As long as we are unable recognize the solution in the people around us, we will be afraid to recognize these diversions for what they are and begin to resist.

Resistance is the name of the game on May Day and beyond, and it has two equally necessary components: disrupting the existing exploitative institutions and building up cooperative, creative alternatives. If all you do is disrupt the status quo, what arises afterward may be no better than what came before. Our occupation in Liberty Square was an imperfect model of both disruption and rebuilding that introduced thousands of people to the potential of mutual aid. There, we helped to meet each other’s needs while confronting an oppressive system that no longer has a place for us. On May Day, once again, we will reject the false solutions presented by those who think they are in charge and point the way to real solutions in the process.