Author, activist and feminist, Grace Lee Boggs has been a witness to and a participant in almost every major social movement in this country going back to the early 1940s. A resident of Detroit since 1953, she has seen the Motor City's long decline and has been involved in various campaigns to reinvent the city as a space that serves the needs of its residents. In 2011, she published The Next American Revolution: Sustainable Activism for the Twenty-First Century. She will appear at Cooper Union this Friday at 7pm with Amy Goodman to kick off a weekend of panels and discussions on how to create living alternatives to failing status quo institutions in a variety of fields.

John Tarleton: In your book, you state that the change we need requires us to transform ourselves as well as our institutions. Why is that?

JT:  What are some of the most hopeful signs you see of that kind of development at the moment?

GLB:  The most hopeful sign is I feel the hunger of people for this idea. In a city like Detroit, where devastation is all around us, the challenge to grow our souls in order to grow, to rebuild our economy, makes a great deal of sense.

When we look at institutions that are collapsing all around us, the idea of simply shoring them up, rebuilding them, making them look better doesn’t make any sense. We have to think about what is the alternative. Disaster has provided us with an opportunity to rebuild, redefine and respirit our cities. And to see in devastation that kind of challenge is the opportunity of this moment in history.

JT:  What has occurred in Detroit that people can draw inspiration from?

GLB:  Well Detroit is of course a majority African American community. It's made up of people who are descendents of folks who came from the South. And what was very interesting as the city began to be abandoned and we had more vacant lots is that where as many people saw the vacant lots as blights, as places filled with old tires and old mattresses and dead cats, these people from the South saw them as opportunities to grow food and also to have city-raised kids think of change in terms of process rather than pushing a button.  That was an extraordinary learning experience for me and I think for the whole country, to see in disaster the possibilities of rebirth, not by rebuilding what was there before but by building something new.

I think that's why the whole thing that's taking place at Cooper Union later this week has such promise because the people on the panels see our period as one that demands the changing of ourselves as well as of our institutions.

JT:  You describe small efforts like this that are taking place in communities  around the world as a new and different kind of movement that has no central leadership. Why is this significant?

GLB:  Well I compare it to the change from hunting and gathering to agriculture 11,000 years ago and from agriculture to industry a few hundred years ago. This is a very far reaching and profound transformation, which involves so much in the way of cultural revolution.

JT:  What do you make of the Occupy movement and its role in this process?

GLB:  The Occupy movement was very important because it broke the silence and changed the conversation. But I think it cannot continue along the road of more and more militant actions. I think it has to begin creating alternatives and re-imagining alternatives.  That's why what's going to happen at Cooper Union is so important because I think it's going to open up people's imaginations.

JT: It feels like we're in a race against time as 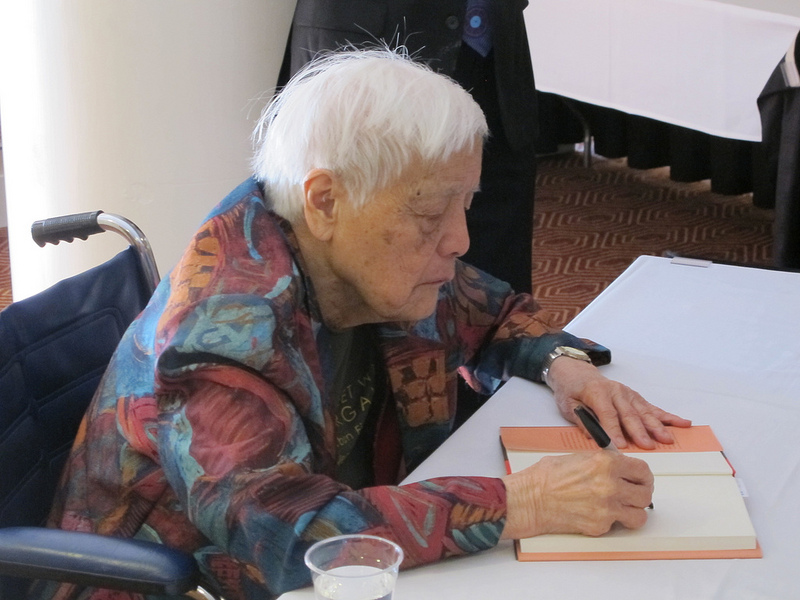 our techno-industrial civilization doubles down on resource extraction, expanding wars, the surveillance state and so on.

JT:  Many young people have recently come into activism through the Occupy movement. As someone who has been an activist for three-quarters of a century, what's your advice to newer activists for how to sustain themselves and not burn out?

JT:  Four years ago many progressives were inspired by Barack Obama. What are your thoughts on the way the last four years have gone since with Obama and what we can learn from that?

GLB:  A lot of people voted for him because they wanted change and he promised change. I think we had the illusion that change could come from the top, which it could not. Change has to come from below. That's when it begins to last. The urban agricultural movement, for example, is the fastest growing movement in the United States. It's very grass roots. It's very grounded.

GLB:  I think there is a great deal of hope in uncertainty, which is what we have plenty of.

JT:  And you find hope instead of fear in this time of uncertainty?

A:  I'm a student of Hegel, to begin with, and also I'm Chinese. The Chinese characters for crisis are "danger" and "opportunity." Our challenge is to seize the opportunity and not worry about the danger so much.

Grace Lee Boggs will speak Friday April 20 at 7 pm at Cooper Union as a part of the opening plenary of “This Is How We Do It: A Festival of Dialogues About Another World Under Construction”, a three-day event that will bring together leading social change innovators from around the world to discuss alternative practices being developed right now in economics, public safety, media and communications, politics and more. For more information, click here.