In Mexico City’s daily life — in the shops, taxicabs, cafes and lines waiting for the bus — one could hear conversations between people of all ages saying Enrique Peña Nieto would, without a doubt, win the presidential elections. “Either something huge will happen,” a taxi driver told me, “or he will win.” And when people referred to “something huge happening,” they were referring to violence, or some unbearable crisis.

But it hasn’t happened like that. Far from anything originally expected, it is the Mexican youth and university students who are doing “something huge.” They have altered the political agenda in the country to prove that no one wins an election until the election itself.

The gathering began on May 23 at the Estela de Luz, or Pillar of Light — a monument that has caused much controversy due to the billions of pesos the government invested in its construction. The students appropriated this symbol of corruption to illuminate it with their democratic demands in a key pre-electoral moment.

With only forty days left in the race, the protest was provoked by the manipulation of information and the imposition of a candidate by the corporate and media elites during the hype of the electoral campaigns. In the end, twenty thousand students from different universities, public and private, marched for four hours along the main avenues of Mexico City. The protests that followed have sparked talk of a “Mexican Spring,” making reference to the uprisings that began in North Africa at the end of 2010.

Javier Sicilia, the poet, journalist and leader of the Movement for Peace with Justice and Dignity (MPJD), came to give his support at the march and to share some very emotional and inspiring words. Remembering his son Juanelo — who was assassinated on March 28, 2011 and would surely have been marching if he were still alive — Sicilia said, “I would want to see my son here. I can’t see him, but I see him in the thousands of youth here.”

Sicilia inspired the movement that shook the country last year by asking for an end to the war on drugs, an end to the violence in the country and justice for its victims. In reference to the student protest he added that, “we are at a historical breaking point, a crisis of the world’s civilization. We are coming through the cracks in the state and the crumbling economy to build something new.”

The poet expressed his excitement, “They are the ones fighting for the present; it’s the revolt of intelligence in the face of barbarism. They are not minors. They are our elders fighting for what we took from them, their present. It’s a marvelous lesson and we are here to support them.”

The principal demands of the students coincide with the last point of the National Pact for Peace that Javier Sicilia proposed at the Zócalo in downtown Mexico City on May 8, 2011, when the MPJD was just beginning: political reform, a representative democracy, the democratization of the media and state policy that breaks with the monopoly of the media — a policy that will generate competition and make public media stronger.

In this sense, it seems as though the Movement that had its first anniversary on March 28, found in these students and youth its perfect allies to rebuild the social fabric of Mexican society.

The story started two weeks ago on May 11 during a meeting with Enrique Peña Nieto, the presidential candidate of the Institutional Revolutionary Party (PRI) at the Iberoamericana University (Ibero), one of the most prestigious private universities in the country. Students admonished the handsome candidate that aspires to be Mexico’s next president and give hegemonic power back to the PRI, which lost twelve years ago. They shouted “Coward!,” “Ibero doesn’t want you!,” and “Assassin!,”  reminding the candidate of the brutal repression he ordered against the farmers and florists that mobilized in San Salvador Atenco in 2006, when he was the governor of Estado de México (the state bordering Mexico City). This repression, in which two young men were murdered, 350 people were detained — including 10 minors — and 26 women were raped, was one of the most violent episodes during his mandate.

Trying to avoid a scandal in the media and attempting to protect his image as a candidate in the face of the student’s disapproval, the PRI accused the students of being agitators paid for by the candidate of the left, Andrés Manuel Lopez Obrador (AMLO) of the Party of the Democratic Revolution (PRD). The media duopoly that dominates 95 percent of television concessions in Mexico — Televisa and TV Azteca — followed the script by not giving visibility to the student protest against the candidate that the two have already determined will be the “winner” during the electoral process.

But Peña Nieto’s advisers and the media duopoly missed a detail: many students posted videos online that went viral on the social networks, exposing how the two huge television networks were omitting what really happened and selling what occurred as a “campaign success.”

Three days later, 131 students posted a video on YouTube in which they identified themselves as students with their official Student ID cards and they assured viewers that nobody had paid them to admonish Peña Nieto. In this video, the students insist that they do not belong to any political party and express their disapproval of Peña Nieto and the evident manipulation of information. The video has had over one million hits to date.

Now, youth from other universities have decided to support the Ibero students who exposed the relationship between Peña Nieto and the media elites and the lack of fairness and equality in the political campaigns. They then adopted the name #YoSoy132 (or #IAm132), because they united “in conjunction” as one more.

That day, a student movement with their name in the form of a hashtag was born. It extended itself on the web and became a worldwide trending topic for over six days. The movement called for massive mobilizations on the streets of Mexico City, such as the march led by students from four main private universities — Ibero, Anáhuac, Tecnológico de Monterrey and the Instituto Tecnológico Autónomo de México (ITAM) — on May 18, who held a rally in front of the various Televisa offices demanding “transparent, plural and impartial information that promotes critical thinking” and does not favor any single candidate. 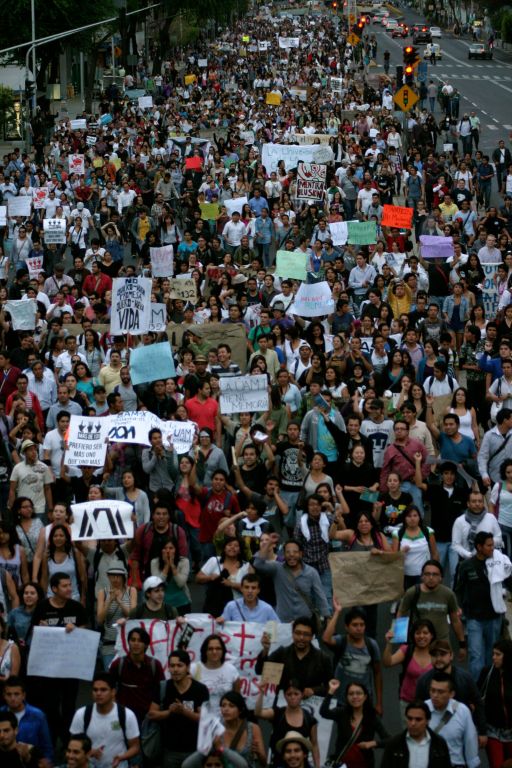 With no relation to the youth of I am 132, the following day, according to official estimates, 45,000 people marched against the PRI’s candidate Peña Nieto in downtown Mexico City without representing any other political party or candidate. No movement or organization took responsibility for the gathering; it was all born out of the social networks.

On the afternoon of May 23, those who introduced the hashtag on Twitter, also created their own website hours before the march. Twenty thousand people showed up, marching with books in hand — shouting and chanting for a change in the country. Fliers that the students handed out stated their demand that citizens can “criticize their government, politicians, the heads of corporations, and society itself based on facts. This is why, I am 132 makes the right to information and the right to freedom of speech its main demand.”

They also declared that they are a “movement free from any political party and made up of citizens, and that’s why they do not support or reject to any political candidate.” Another demand of I am 132 is “the guarantee to internet access as a constitutional right.”

As people joined the protest, the students decided to march along Paseo de la Reforma (one of Mexico City’s main avenues), to the monument of the Angel of Independence. Once there, spontaneously, some of the protesters decided to continue to the main headquarters of TV network Televisa to demand the transmission of a second political debate on June 10 by the candidates on national television. Another group of protesters continued the march to the Zócalo in the centre of the city capital.

During the march, the demonstrators chanted “We don’t want a Soap Opera of a Democracy” and “October 2 isn’t forgotten,” in reference to the day in which the Mexican government tried to dismantle the student movement of 1968, killing hundreds according to independent investigations.

There were also demonstrations in other states on the country, in Oaxaca, Jalisco, Morelos, Querétaro, Yucatán, Michoacán Hidalgo, Chiapas, Baja California, Puebla, and Estado México.

The students have called a general assembly for Wednesday May 30 in which representatives of each university will work on their collective proposals.

Has the Mexican Spring arrived? 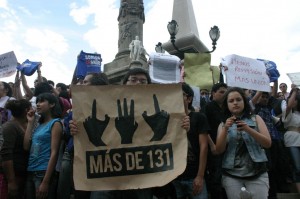 Whether or not the Mexican Spring has arrived, the students wanted to demonstrate that no one can win the presidency before an election takes place. They ask for the truth. Also, they are showing that the youth are politically engaged.

This is about the self-expression of a generation that is challenging the assumed victory of a presidential candidate forty days before the elections. They are playing their role as revolutionaries, as agents of change and of a moral force. These students know that social media can be a space where they can participate as free and independent citizens and can serve as a counterbalance to the discourse of the powers that be, including the media duopoly.

As Lyalli, a 23-year old student from the Universidad Autónoma Metropolitana (UAM) says, “it’s the first time in which many of our generation are going to vote. They should see that we, the youth are interested in our country, in changing it, in creating a better society starting with ourselves.”

“We are party-less. We are not favoring any political party or candidate and we want the media to open up, to stop lying,” said a student at Universidad Nacional Autónoma de México (UNAM).

They are party-less but not apolitical. The supposed apathy and individualism and by which the Mexican youth have been characterized has been disproved on the streets and on the web. The budding movement intends to organize itself, create ties between the different universities, public or private, to elaborate collective proposals, and to develop a more concrete political organization. Only after this can we start talking about a Mexican Spring.