One conference, 10 workshop themes, over 150 workshops, film screenings, cooking demos, and over 400 individual speakers all focused on one thing–food justice.

Check out all the Indy Food Coverage from Issue 176:

In New York City, 1.3 million people go hungry every day. One in 5 children entering  kindergarten is obese. While 85% of high school students qualify for free or reduced fare lunch, only 34% of them participate (by participate I mean eat). They'd  rather go hungry then suffer the stigma of being "poor". The food they do get is so far removed from its original source one wonders if it can still be  considered food at all. For adults the picture is no better with obesity increasing from 12% in 1991 to 23% in 2004.  Furhermore, studies have shown there to be direct links between poverty and obesity.

In all this overwhelming negativity, a parent may look at their child and wonder… is there any hope for their food future? Anyone who attended the Brooklyn Food Conference on May 12th at Brooklyn Technical High School can tell you, there  most certainly is hope.

From the start, the first panel delved deeper into the issue of getting healthy, nutritious, whole foods into every single city school. Stephen O'Brien, director of food and food support for the New York City Office of School Food, talked about the steps the government has taken to ensure a healthier diet for New York students. Of the 1200 city school sites that serve food, for example, 900 of them now have salad bars.

Janet Poppendieck, author of Free for All: Fixing School Food in America, spoke about the history of the school food movement. She mentioned that the two major concerns for the movement have remained constant: promoting healthier lifestyles for students, and the anti-hunger agenda. 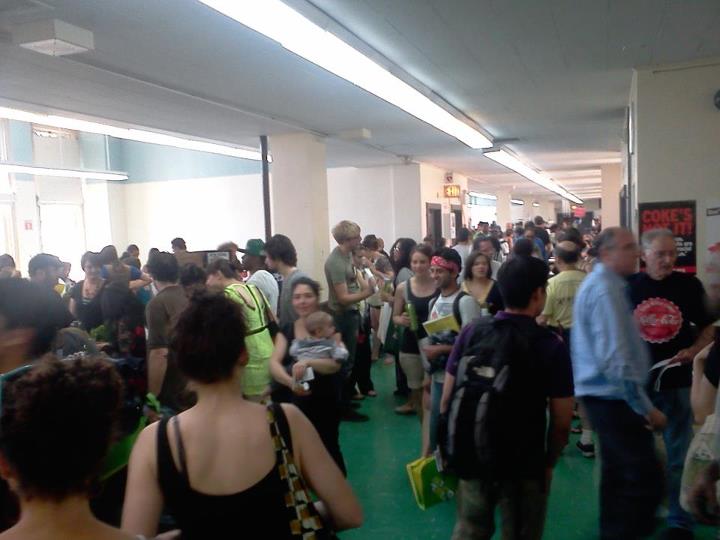 They announced New York State's acceptance into the Community Eligibility Option  child nutrition pilot program. This program may universally provide breakfast and lunch to children in high-poverty schools. They encouraged listeners to contact their city council members and demand they not cut funding to SNAP, WIC, and school food programs.

It wasn't only parents and politicians participating in the day's events. During the Youth Voices of the Brooklyn Food Movement, students gathered to discuss  how and why they got involved in food justice, what they've learned as a result, and what changes they've made in their own lives as well as their community.  There were youth representatives from Teen Battle B Chefs, Added Value, and CookShop for Teens: EATWISE Interns.

There were a few main points that all of the students mentioned.   They learned the difference between whole, healthy food and the processed junk that passes for food.  Being involved in the food preparation process helped them build the confidence necessary to speak publicly which in turn lead to more community outreach and organizing. Learning what to eat and how to prepare food in a more wholesome way helped them build stronger family bonds as well. Meals, they said, have become hugely interactive.

The students also  emphasized  the hands-on aspect of their programs. From ] teaching them how to weed a garden or make a smoothie, to keeping students involved by encouraging them to go out into their communities and pass on their knowledge.

Throughout the day there was an expo in the cafeteria, representing the variety of organizations, programs and socioeconomic movements that make up the food justice movement. There were vendors promoting their food products, made locally, organically and environmentally friendly. There were anti-fracking groups educating people on how shale gas extraction (through a process known as hydraulic-fracturing, or fracking) affects the food chain. Workers rights groups were on hand to inform people on the generally unfair, and sometimes dangerous, conditions food workers must suffer through in all areas of food production, from migrant workers to food servers in restaurants.  Food coops and CSAs (community supported agriculture) were also on hand, as well as community supported credit unions and grant programs.

And through all these activities there was the pervasive sense of community within a growing food justice movement. New New Yorkers were made aware and old New Yorkers were reminded that when the powers that be fail to provide our communities with the basic, necessary tools we need to simply survive, including a sustainable food system, we take matters into our on hands. There's no stopping the power of the people. Especially when there's delicious, sustainable and healthy food at stake.