Over the past few weeks a small group of us from the Kensington neighborhood in Brooklyn have been turning out once again at the Golden Farm grocery store to support local workers fighting for a union contract. Many of us shop at the store, or used to shop there until we heard about the way the owner was treating his employees. The flyers we pass out have a simple message- we live in the community, and we want “quality jobs” in our neighborhood and “justice for all workers.” For years workers at the store have been grossly underpaid ($400 for a 70-plus hour work week) and receive no sick days or other benefits. Over the past year there have been periodic swells of community support, most notably in April when there was a week of action co-organized by NY Communities for Change that culminated with a successful 24 hr. boycott during which the store lost an estimated 60-70% of its usual business.

Since then workers have won a settlement for some of the back wages owed them, and on May 2 there was a vote to unionize. However, the election has been mired by attempts of the owner, Sonny Kim, to derail the effort. By Kim’s own admission, his wife cast a vote in the election, and several other votes had to be challenged since Kim attempted to include managers and others in the voting unit that are not regular employees of the store. 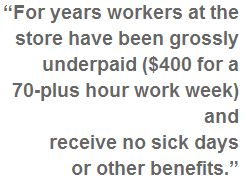 This all came out during a review by the National Labor Review Board, which is still deliberating on the case. If the vote stands, approximately 20 workers will gain the right to negotiate a contract (represented by RWDSU/UFCW Local 338). A decision is expected any day, and many feel that given the circumstances it will go in favor of the workers seeking a union contract, though nothing is certain.

While much now rests in the hands of the NLRB, the need for continued community support still exists, perhaps as much now as ever.  Without a contract, workers remain vulnerable to the whims of a hostile owner, especially those who have been vocal proponents of the union effort and the lawsuit to win back wages. It is important that Kim knows that members of the community are still here, supporting workers’ rights in Kensington. There is also something else at stake. For many of us, workers and community members alike, this campaign has transcended the class boundaries that often divide us, and suggests a way of relating and working together that helps break down those boundaries. At a recent meeting one worker thanked supporters for simply saying hello to him as they walk by the store, noting that before this campaign he often felt invisible.  Many of the supporters have, in turn, felt indebted to the workers for the opportunity to express their support and solidarity. Furthermore, the campaign has brought many people in the neighborhood out of our houses and into the street (and each others’ homes) where we have started to build towards a sense of community that is inclusive and grounded in a common sense of justice. We are local people taking local action in mutual support of each other and for the well-being of the entire community.

Maintaining this sense of solidarity and mutual support is crucial, not only in regards to the Golden Farm case, but for future community-based advocacy and activism. In fact, a group of residents have recently formed “Occupy Kensington” in order to continue and expand on the kind of community-based organizing that emerged around the Golden Farm campaign.  At the initial “O.K.” meetings (or “general assemblies”), supporting the workers has remained a priority, but other issues have also moved into focus, most notably the lack of public space in the neighborhood.  Though “O.K.” is in its early stages, it is clear that people are eager for a forum to discuss local issues, and are fully capable of proposing creative and well thought out actions to address problems in the community.

While some residents have long been organizing around specific concerns, it should not be lost that what inspired this latest wave of community-based organizing is in large part the organizing efforts of some of the most vulnerable members of our community, those working in some of the worst of local labor conditions. And for that we should all be saying a big Thank You to the Golden Farm workers, whose courage to stand up in the face of injustice has been a call to action for many in the community.

Brian Pickett is a theatre teacher and sometimes writer. He has lived in Kensington for 3 years.