Ana Nogueira helped found The Indypendent in 2000. Later, she worked as a producer at Democracy Now!. Most recently, she and her partner Eron Davidson completed work on their first feature-length film, a documentary about Palestine entitled Roadmap to Apartheid. Ellen Davidson and John Tarleton interviewed Nogueira in anticipation of the film’s New York premiere at the Manhattan Film Festival June 22. The award-winning film will also be shown at Anthology Film Archives on June 27.

John Tarleton: Why did you make this film?

Ana Nogueira: The idea came to us in 2004. I am originally from South Africa, and Eron is from Israel. I was covering the Second Intifada for Democracy Now!, and the more I learned, the more I saw the parallels with South African apartheid. Eron was simultaneously learning more about the real situation in the West Bank and Gaza, not the one he learned from his family. At the time, the apartheid analogy was rarely used to describe the situation in Israel/Palestine and only somewhat rhetorically. We wanted to present a more robust thesis on why the analogy was being used and to convey clearly the various ways Israel violates the U.N. Convention Against the Crime of Apartheid.

Ellen Davidson: As someone who lived in South Africa, how well do you think the analogy holds up?

AN: I think it holds up on all the important points, especially the actual crime of apartheid as stipulated in the U.N. Convention Against the Crime of Apartheid. It holds up when you look at all the laws used to control the indigenous population. It even holds up in terms of the historical contexts of both conflicts and especially when you look at Israel’s motivation and its ultimate goal, the de-citizenization of the non-Jewish majority. 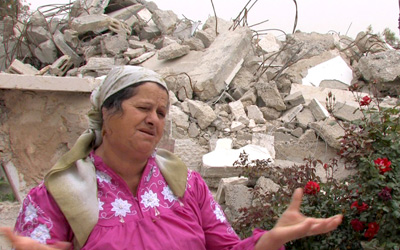 ED: You worked on this film for four years. What was the most difficult part?

AN: It was our first feature film, and we made every mistake in the book. Besides that, the hardest part was deciding what to cut and what audience we were trying to reach. We had to make it accessible to people who don’t know much about the conflict while still saying something new for people who do. It was a big puzzle that took forever.

JT: The film is narrated by Alice Walker. How did she get involved?

AN: We wrestled for a long time with whose voice we wanted behind this film. When we heard Alice Walker on Democracy Now! speaking aboard a boat trying to break the siege on Gaza, we knew we found the right voice. She is inspiring, with rock-solid principles, clarity of vision, and a sweet, calming voice. We simply e-mailed her and asked her to narrate the film. She watched a rough cut and wrote back enthusiastically wanting to be part of it.

ED: Did you get support from progressives inside Israel? What was the reaction of the Palestinian communities where you filmed?

AN: We got a lot of help from people inside Israel and the Occupied Territories. B’Tselem, the Israeli human rights groups, was extremely helpful in connecting us with ordinary families who suffer daily from the occupation. People spoke to the camera about privileges they enjoy, or don’t enjoy, and some helped with translations, logistics, etc.

We recently screened the film in Israel and Palestine and the reactions were amazing. Everywhere we went people said they learned something new, sometimes even just about the village next door. It sparked important conversations about whether the two-state or one-state solution is viable, or neither. In short, I think this film is as important to show in Israel and Palestine as anywhere else, and we are very proud of that.

JT: What are you doing to ensure this film is widely seen?

AN: We are currently in the film festival circuit with the hopes of reaching a broader audience and then we’ll try to have it broadcast on TV channels around the world. Following that, we are super excited to travel with it across the United States, particularly to college campuses, and to have respectful conversations about what we as ordinary citizens can do about this issue. The whole world stood up to apartheid in South Africa and helped to end it, and we feel we can have a similar impact in this situation. The U.S. government did nothing to end South African apartheid until the majority of its citizens demanded it, and it will take the same pressure to force the United States to stop supporting Israel until it complies with international law.