If you found yourself on Twitter yesterday, you might have noticed the rather unlikely hashtag #EndFossilFuelSubsidies trending near the top of all worldwide Twitter activity throughout the day. This was no accident, but rather the result of efforts by 350.org, Avaaz, and other global human rights and environmental organizations whose aim was to start a “Twitter storm” during the current G20 summit of major industrial economies and just ahead of this week’s U.N. Rio+20 Conference on Sustainable Development.

Considering fossil fuel subsidies are not at first glance the sexiest issue in the world, let alone something that typically goes viral on social media alongside Katy Perry’s new music video #WideAwake or #10AttractivePeopleIFollow, what these groups managed to accomplish is no small feat. While their significant number of followers should not be overlooked as a factor in this Twitter coup, they aren’t the whole story. In large part, the Twitter storm was successful because it focused on an issue that angers almost everyone once they start thinking about it.

These subsidies — which are essentially handouts to oil companies in the form of tax incentives and other uses of public funds — reflect and contribute to some of the fundamental problems in our interconnected ecological, economic and political systems. As such, they might just be the perfect target for breaking out of our silos and building bridges between social movements.

On the environmental front, we can see that these subsidies are direct payments to polluters. They create powerful incentives for behaviors that exacerbate dangerous climate change and pollute localized air and water. The International Energy Agency estimates that phasing out these subsidies by 2020 would reduce carbon dioxide emissions by nearly 6 percent, or 2.6 gigatons. That’s the equivalent of half a billion cars. Equally important is that removing these subsidies would allow renewable energy technologies, which currently receives only 8 percent of the support that fossil fuels do, to compete on an equal footing in the global energy market.

On the economic front, these subsidies represent a huge waste of public funds. According to a recent study by Oil Change International they add up to nearly $1 trillion globally every year. In the face of painful cuts across Europe and the U.S., it’s clear this is money that could be used to create jobs, improve schools and build sustainable infrastructure. It could also be used to help the world’s poorest people who are made ever more vulnerable by climatic destabilization.

Defenders of these subsidies try to claim that the money is a necessity to make energy accessible to the very poor. While they may be right about the very real problem of energy poverty, there are much better ways to deal with it. Studies show that almost none of the money that goes into subsidizing energy production or exploration makes it into the hands of the poor. Instead, it just lines the pockets of the wealthiest and most powerful companies in human history. Subsidies for consumption help a little but are generally extremely inefficient since the demand for energy is much higher among middle class and wealthy people. There are more direct and effective ways to help the very poor in the short term without also sacrificing the stability of the Earth’s ecosystems.

Finally, we have to consider our political system. If these subsidies do so much harm and so little good, why do they still exist? One of the common threads which runs through Occupy encampments, Tea Party propaganda, Arab Spring revolts and European anti-austerity movements is a sense that government is run for the benefit of powerful elites with vested interests at the expense of the average citizen. Indeed, this is the case in subsidy reform. For big oil, coal and gas the return on investment they get from lobbying means that politicians are the most attractive assets a company can acquire. Not to mention that any candidate who opposes these handouts must fear retribution from the likes of the oil-rich Koch brothers in a post-Citizens United world.

The groups that organized and joined yesterday’s Twitter storm — along with the youth who led a silent march through the halls of the U.N. — have opened a window of opportunity for action on this critical issue in advance of a major U.N. meeting. The next step is to figure out how to keep pressure on world leaders and stand up to powerful interests. Those who helped stall the Keystone XL pipeline know that this is possible, especially if a broad coalition, like the one that formed Tar Sands Action, can be built. 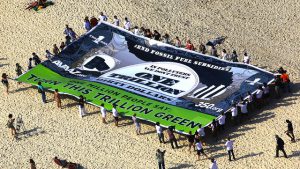 The Rio+20 Earth Summit is the perfect opportunity for such movement building and organizers on the ground are trying to figure out how best to do it. But it isn’t easy. The U.N. complex is almost two hours from the city center, which makes coordination between the thousands at the People’s Summit difficult but not impossible. Both groups came together on Monday for a massive banner unfurling on Copacabana beach. There’s also a large march being planned for Wednesday, where subsidies will be among the key issues.

Meanwhile, there is an enormous amount that activists are trying to do to use Rio to draw attention to the subsidies issue at home. Several prominent British environmental NGOs are expected to publish an open public letter to Prime Minister David Cameron imploring him to finally support a popular proposal for a financial transactions tax, close corporate tax loopholes and end fossil fuel subsidies as part of a comprehensive package to fund sustainable development at home and abroad.

Americans have already been active in signing global online petitions, tweeting up a storm and interrogating their representatives for 350.org’s online scoreboard. They have not, however, taken major visible actions targeting President Obama or Congress on fossil fuel handouts.

Inside sources report that the U.S. delegation here at Rio+20 is closely following media coverage of the summit. They are counting on Americans to not pay much attention to a U.N. conference that is likely to become another wasted opportunity. They’ve already said that they’re willing to support language that identifies the problem of subsidies but makes no commitments to get rid of them. Activists willing to reach outside of their normal silos and make noise with a broad array of allies can put serious pressure on the U.S. and on the entire process to deliver more than the usual platitudes that tend to come out of these international spectacles.